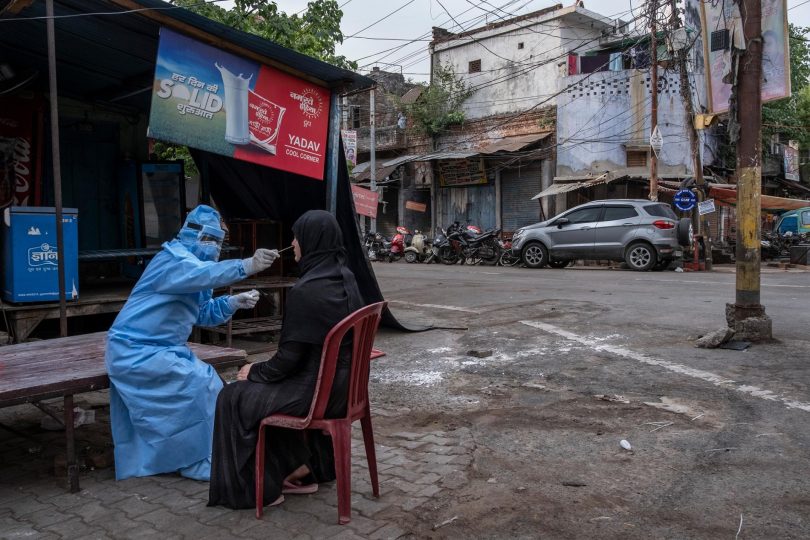 Low-paid and often working without proper protection, these women are fighting to be recognized.

VIJAYALAKSHMI SHARMA RANG the doorbell of an apartment in a sprawling housing complex in Noida, a satellite city of New Delhi that has been designated a COVID-19 red zone.

As she waited for someone to answer the door, she tightened her dupatta, a traditional long scarf, around her head, and adjusted her surgical mask. She tapped the register in her hand a tad impatiently. She was only on the sixth floor and it was already 1 p.m. She had another 17 floors to cover that day.

The door finally opened and a face peeked out. After a quick introduction, Sharma fired off a list of questions: How many people live here? Is there a domestic worker? Has anyone complained of fever or feeling unwell? The glass bangles on her wrist collided with each other as she recorded the replies on her questionnaire.

A few hours later, she sat in the housing complex’s park with four colleagues, drinking water and fanning her face with the register. Between the five of them, they had to cover nearly 1,400 flats in 16 towers over the course of the day. “We don’t mind the work. It benefits our communities,” Sharma said, adding that she and her coworkers consider it their “social duty.”

Sharma is a community health worker. She works in one of India’s more than 1.3 million anganwadi centers, established by the government in 1975 to address malnutrition among vulnerable women and children. With the outbreak of the pandemic, the nation’s 2.7 million anganwadi workers have also become frontline responders in the fight against coronavirus in their communities. On top of their usual responsibilities, they distribute dry rations and cooked food, screen people for COVID-19, and spread awareness of the virus. Working alongside them are about a million Accredited Social Health Activists (ASHAs), charged with tracking migrants returning home, monitoring contact tracing, reporting suspected COVID-19 cases, and accompanying the sick to nearby medical centers.

This voluntary workforce of over 3.5 million poorly paid, semi-literate women are India’s first line of defense against the coronavirus, relied upon by a government that praises them but has done little to protect, support, or compensate them. “If they get infected who will take responsibility for that?” asked Girish Pandey, president the Women Anganwadi Workers Union (Uttar Pradesh), which represents the majority of the state’s 320,000 anganwadi workers. “They too have families. They are not nameless, faceless martyrs.”

At least two-thirds of India’s 1.4 billion people depend on the public healthcare system, but the country only has 8.5 hospital beds and 8 physicians per 10,000 people. Compare this with Japan and South Korea, who have 120 and 130 beds per 10,000 people respectively. As a result, many Indian communities, especially at-risk women and children, rely on community health workers like Sharma for primary healthcare.

Anganwadi workers like her provide supplementary nutrition for children, pregnant women, and nursing mothers, teach mothers about child nutrition, and give pre-formal school education, while the ASHAs advise women to give birth in hospitals instead of at home, provide family planning education, ensure immunization, give first aid, and administer anti-malarial and anti-tubercular drugs.

But despite the key role they play in combating India’s health crises, anganwadi workers and ASHAs do not have regular salaries, partly because their work is supposed to be voluntary and part-time. Most, however, end up working full-time due to the demands in their communities. On average, a single ASHA tends to the needs of about 1,000 people, though numbers vary.

Anganwadi workers are paid around Rs 5000 a month ($68), less than half of India’s average monthly salary of $148. ASHAs earn based on incentives: about $1 for each full immunization, 50 cents for reporting child death, $4 for accompanying a woman to a hospital for childbirth, and $13 for administering TB treatment over 6-7 months. Now, they are being paid an additional $13 for COVID-19 interventions.

“The government expects these women to provide so many crucial and important health services without compensating them fairly,” said Harjit Singh Bhatti, a doctor, activist, and president of the Progressive Medicos and Scientists Forum. “But when you are enlisting them as frontline workers for such a deadly disease, the most humane thing to do would be to provide them with proper protective gear.”

According to Prime Minister Narendra Modi, India is now manufacturing over 200,000 personal protective equipment kits and 200,000 stand-alone N95 masks every day. And yet these grassroots medical workers often have to go without PPE or find their own. Devrati, an ASHA near Lucknow, in Uttar Pradesh, India’s largest state, bought her own mask because “going to people to tell them about the importance of keeping their faces covered while not using a mask wouldn’t have worked.” Kanchan Pandey, an ASHA in Azamgarh in Uttar Pradesh, also bought her own. (Meet the women on the frontlines in São Paulo, Brazil.)

In March, the Indian government announced that 2.2 million public sector health workers who were dealing directly with COVID-19 patients would be covered by an additional medical insurance for 90 days. However, given their status as volunteers, it is unclear how many anganwadi workers and ASHAs would actually receive the benefits.

The government has paid plenty of lip service to the sacrifice of health workers. In late March, Modi exhorted Indians to come onto their balconies and applaud frontline health workers by clapping and banging plates and cooking utensils. The armed forces organized a flyby and showered hospitals with rose petals. In early May, Modi compared health workers to Buddha for having “come out to help humanity, not only in India but across the world. Each such individual is worthy of a salute.”

But as coronavirus cases in India top 190,000, health workers’ patience is running thin. They grapple with fear of infection, social stigma, long working hours, and government apathy. Over 500 doctors, nurses, and paramedics have been infected. In late May, after a 46-year-old nurse died from the virus, her coworkers alleged that they were made to reuse protective kits, including gloves and masks.

Health workers have also been targeted by the government for speaking out against protective gear shortages. On April 6, the Resident Doctors’ Association of Delhi’s All India Institute of Medical Sciences, which represents 2,500 doctors, posted a letter to Modi on Twitter claiming that healthcare workers who have spoken out on shortages of PPE, COVID-19 testing equipment, and quarantine facilities on social media “have received a harsh backlash” from government officials. An anesthesiologist in south India, who publicly raised concerns about the lack of PPE, was suspended, detained by the police, and sent to a mental hospital.

The communities these health workers are trying to help also view them with suspicion and sometimes even physically attack them. Health workers have been evicted by landlords and heckled by neighbors. In Rajasthan, ASHAs were denied entry in homes “as they could potentially carry the disease during visits to other households,” according to an Oxford Policy Management report. Local media has reported attacks on ASHAs and anganwadi workers trying to test people with COVID-19 symptoms. Vijayalakshmi Sharma, the anganwadi worker in Noida, was accused of being a thief by a resident of an apartment complex in late May, when she knocked on his door for a COVID-19 survey. (Read how women in India are demanding—and getting—safer streets.)

“We are caught in between communities, who are resentful and suspicious, and the government who are reluctant to give us even a simple mask to protect ourselves,” said Pandey, the ASHA in Azamgarh, over a scratchy telephone line.

Before she hung up, she had a small request.

“We might not be important but the work we do is. Can you please ask the government to acknowledge us, too?”