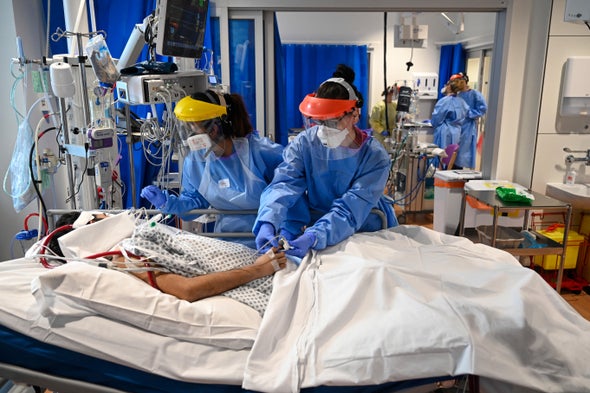 We’ve learned an incredible amount about the novel coronavirus these last few months. It seems that people can transmit the virus without symptoms, that virus particles can spread through a lingering, mistlike aerosol, and that a deadened sense of taste is a surprisingly reliable indicator of infection. But we’re still struggling to answer what may seem like the most pressing question of all: how deadly is it?

It’s a question that has driven heated debate about whether lockdown measures cause more harm than good, and about how we should reopen the country.

Here’s my take as an emergency physician: it doesn’t matter.

Let me back up for a minute, before I tell you why. First, we need to understand a few things about the mortality rate, which is a measure of how many people with the virus will die from it, and its limitations.

When the virus emerged as a serious threat in the city of Wuhan, early estimates for the mortality rate stood between 3 percent and 4 percent. But a few voices urged caution when interpreting this figure. People with mild symptoms (or no symptoms) were less likely to be tested for the virus and counted as a confirmed case. Since the mortality rate is a ratio of the number of deaths from the virus divided by the number of infections, an artificially low denominator from undetected cases would make the virus look deadlier than it was.

Months later, scientists were still struggling to determine the mortality rate in Wuhan, even as the virus spread rapidly around the world. In March, researchers used a different approach to estimate the true number of infections in Wuhan and found that the mortality rate may have been closer to 1.4 percent. Then, in April, the number of COVID deaths in Wuhan was revised upward, tripling the previous count and pushing the estimated mortality rate up again. So, what was the true rate in Wuhan? We still don’t really know.

Now, with the coronavirus endemic in the United States, we’re facing the same challenges. Given the excruciatingly slow effort to ramp up testing, and persistent testing problems even now, the total number of cases is almost certainly higher than the number of confirmed cases, possibly by a factor of 10 or even 20. We’re not sure about the number of deaths, either. All-cause mortality during March and April was substantially higher in places hit hard by the virus, like New York and New Jersey, than in previous years. Confirmed coronavirus deaths don’t fully account for the difference, suggesting that we might be undercounting them. Alternatively, excess deaths could also be from things like heart attacks or surgical emergencies, if people were too frightened to seek medical attention. Both the numerator and the denominator needed to calculate a mortality rate remain fuzzy.

Mortality rates from other countries affected by the pandemic have added to confusion about how deadly the virus is. The rate is nearly 14 percent in Italy, but only 0.5 percent in Iceland. Germany stands at 4.5 percent, and South Korea is half that at 2.4 percent. The United States mortality rate is about 6 percent, slightly less than the global average of 6.8 percent.

Hospital capacity also influences the risk of dying from the virus, because the quality of medical care suffers when a hospital is overwhelmed. Capacity varies from country to country: Germany has eight hospital beds per thousand people, for instance, but the U.S. has less than three. Mortality rates can evolve over time, too. According to the WHO, mortality decreased in Wuhan because hospitals were inundated early on and then increased their capacity later in the outbreak.

So, the mortality rate, instead of being a fixed number that distills the true essence of the virus’s danger, is actually a protean, organic, fluid metric. The rate of fatalities among COVID-19 cases “is not a biological constant,” according to a team of Oxford researchers. “Instead, it reflects the severity of the disease in a particular context, at a particular time, in a particular population.” Even with perfect data, the mortality rate is a living number, changing all the time, that is in part a reflection of ourselves. With these limitations in mind, we should be wary of using any one estimate of mortality in shaping our response to the pandemic.

Unfortunately, that hasn’t stopped some commentators and even some scientists from trying. John Ioannidis, a respected scientist at Stanford, was an early skeptic that the virus was any worse than the flu, which has a mortality rate of about 0.1 percent. In March, Ioannidis argued that a “reasonable” estimate of the mortality rate for the coronavirus could actually be lower than for influenza, and suggested that lockdown measures might be “totally irrational.” “It’s like an elephant being attacked by a house cat,” he wrote. “Frustrated and trying to avoid the cat, the elephant accidentally jumps off a cliff and dies.”

In late April, Ioannidis and colleagues at Stanford released a preprint of a study that purported to support this claim. The study was released without peer review, and its methods and conclusions have been ferociously criticized by other statisticians and scientists.

Even so, the study has added fuel to what has somehow become a highly partisan fire, with many conservatives latching on to any evidence suggesting a lower mortality rate, claiming that the virus isn’t as dangerous as billed and that we are cratering the economy for no good reason. On the other side, liberals have tended to align with public health authorities, who caution to go slow on reopening because the virus is dangerous cases are still rising, and our capacity to test and trace remains inadequate. So, who’s right?

Now we’re ready to come full circle. As we’ve seen, mortality exists on a spectrum instead of as a single number, and persistent problems with testing and categorizing deaths make estimates extremely tricky. This work is important, because a better understanding of the virus’s behavior can only help us.

But from my perspective as an emergency physician, precisely how deadly the virus is doesn’t matter right now, because the virus is deadly enough. I’ve stood on the front lines of the pandemic, and I know that this virus is no house cat. Every day for weeks, my colleagues and I have faced wave after wave of COVID patients in their 30s, 50s or 80s, many of them extraordinarily ill. Some of these people have died. Its virulence is astonishing, at least among hospitalized patients. Experienced physicians know that this is nothing like the flu.

We know enough to understand the dangerous potential that this virus still holds. We know that the coronavirus spreads twice as fast as flu, or faster, and that if left unchecked it has the potential to race through populations like wildfire. We know that viral “dose” likely influences illness severity, which masks and social distancing can mitigate. We know that a large majority of people likely remain unexposed and susceptible. If infected, we know some of these people will die.

Wherever the mortality rates may settle, we have enough information to act responsibly, with carefully phased reopenings and robust testing and contact tracing.

We know enough to know that this virus is deadly serious.