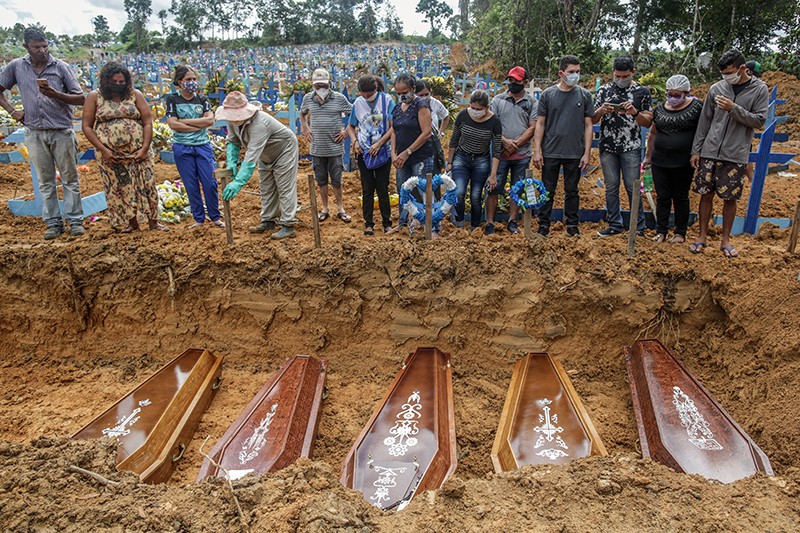 Researchers fear that breakthroughs from abroad will be too slow or inequitably shared to benefit the global south.

Gustavo Cabral de Miranda is used to people doubting him. As a child, he often had to put his schoolwork on hold to help his family, selling ice cream and mangoes at fairs or working at a butcher’s shop in Bahia, in northeastern Brazil. By the time he decided, at 22 years old, to stop this work and study to become a scientist, others were telling him that academic life would not suit him: “It wasn’t for people like me,” he remembers them saying.

Now, Cabral, an immunologist at the University of São Paulo, is one of a number of ambitious Latin American scientists who are forging ahead with vaccine research programmes to fight COVID-19.

Right now, there is no vaccine for the coronavirus that causes the disease. A select group of candidates, most of them supported by pharmaceutical companies in China, the United States and Europe, have entered trials in humans. But researchers such as Cabral want a back-up plan, in case these well-resourced front runners are not successful, or hoarding or international deal-making prevents them from reaching low- and middle-income countries. Their goals echo long-standing efforts throughout Latin America to capitalize on national knowledge and establish — or re-establish — scientific independence from overseas pharmaceutical companies.

As Latin America becomes the new epicentre of COVID-19, concerns are flaring about the prospect of relying on a vaccine developed and manufactured elsewhere, especially given that rich countries have had better access to vaccines in the past1. “We’ve already seen some monopoly behaviour, even though we don’t have a COVID-19 vaccine yet,” says Gavin Yamey, a global-health researcher at Duke University in Durham, North Carolina. Some governments of high-income countries have reportedly tried to buy vaccine-manufacturing companies or acquire a percentage of their supply.

“The only ones who are going to solve the problems in Latin America are going to be us, Latin Americans. No one’s coming to rescue us,” says María Elena Bottazzi, a Honduran microbiologist at Baylor College of Medicine in Houston, Texas, who’s developing a COVID-19 vaccine that she plans to distribute throughout the region by partnering with local vaccine-producing hubs, such as Mexico, Brazil and Argentina.

Some groups are working on ensuring equitable access, but billions of doses will be needed worldwide and no single provider can supply that amount, says Fernando Lobos, a director at Sinergium Biotech, a vaccine maker in Buenos Aires.

Instead of waiting to see what happens, researchers across Latin America are working to find their own way out of the pandemic. “It does not matter if we start with less funds, but rather that we start,” says Cabral.

Betting on innovation in Brazil

Cabral returned to Brazil in November 2019, after five years in Europe learning about new vaccine technologies. He was working on vaccines against the bacterium Streptococcus pyogenes and the Chikungunya virus, which both cause a lot of illness in Brazil – when COVID-19 began spreading rapidly across the globe. “I had to quickly adapt the project,” he says.

His team uses harmless, hollow, virus-like particles created in the lab. The researchers stud the surfaces of these particles with fragments of the proteins that the coronavirus uses to enter human cells; the idea is to trick the immune system into producing antibodies that would block the coronavirus during an infection.

Because these particles can’t replicate inside the human body, they’re considered safer than vaccines made from weakened viruses, and the technology has been used to create commercially available vaccines for hepatitis B and human papillomavirus. Cabral’s group is starting animal testing, and some other COVID-19 vaccine candidates in preclinical evaluation are following a similar approach.

Cabral thinks Brazil would be able to produce a safe and effective vaccine on a large scale and distribute it throughout the nation and to neighbouring countries. The country is one of the largest vaccine producers in Latin America. Over the past several decades, it has introduced improved technologies, trained pioneering scientists and developed the most diverse vaccine portfolio in the region — even exporting to other nations.

Luciana Leite, a vaccinologist at the Butantan Institute in São Paulo, says that innovation is key. The world will need alternatives if vaccine candidates using conventional approaches fail. “If you have an idea that’s different from what’s out there, I think it’s worthwhile contributing with that,” she says.

Her own approach is based on a property of some bacteria that release tiny bubbles, or vesicles, from their membranes to mislead a host’s immune system. Researchers have tried to harness these vesicles to carry viral proteins — antigens that the immune system can recognize and make antibodies against — mixing them together to trigger a response. In as-yet unpublished research, Leite and her students have found a way to attach large amounts of antigens to the bubbles, inducing a stronger-than-usual immune response. They are now using the same technique with proteins from the coronavirus SARS-CoV-2.

Cabral hopes that all these efforts will showBrazilians that the government should invest more in research, which has been hit by budget cuts in recent years, sparking an exodus of young scientists. The COVID-19 pandemic is the right moment, he says.

“This is the best time to open our eyes,” Cabral says. “When the dust settles, priorities change.”

A few weeks ago, Laura Palomares reached out to a colleague for help with a COVID-19 vaccine she is developing using virus-like particles. Palomares, a biotechnologist at the National Autonomous University of Mexico in Cuernavaca, was shocked by his response.

“He says, ‘Laura, all right, I’m going to help you, but I don’t know why you’re wasting your time doing this.’” Why bother creating a vaccine when the first successful vaccines will come from abroad, she remembers him asking.

It’s an argument she has heard many times — but it ignores Mexico’s history of vaccine production.

For about four decades, Mexico manufactured most of the vaccines needed for its national immunization programme. But the government dismantled the institutes responsible for producing vaccines and, in the late 1990s, replaced them with Birmex, a state-owned company. Since then, national vaccine production has plummeted. Now, Palomares says, Mexico produces only two vaccines, against influenza and hepatitis B.

If her vaccine works against SARS-CoV-2, she might be able to partner with Birmex to get it produced. Palomares hopes that manufacturing a domestically developed COVID-19 vaccine will push the company to resume the production of other vaccines needed for the national immunization programme.

But another option might be seeking help from abroad, says José Manuel Aguilar, a biotechnologist at the Monterrey Institute of Technology and Higher Education in Mexico. He and his colleagues have already contacted a Canadian company that could manufacture enough doses for them to start evaluating their own vaccine in humans once they finish animal testing.

Their vaccine uses rings of DNA called nanoplasmids, which are taken up by cells. The DNA encodes a specific region of the protein that SARS-CoV-2 uses to infect a host; this allows the cells to produce the antigen and display it on their surface, alerting the host’s immune system.

Aguilar says that if the group’s clinical results are promising, and if the researchers can find enough funds, they could ramp up production in three months, to fabricate millions of doses. “We could put Mexico in the vaccine race,” he says.

Playing to strengths in Chile

In the 1960s, Chile developed a vaccine that soon became key to controlling rabies throughout Latin America. Since then, however, the country has lost its production capacity. Today, “all human vaccines used in Chile are obtained from foreign laboratories”, says Alexis Kalergis, an immunologist at the Pontifical Catholic University of Chile in Santiago.

But that hasn’t stopped Chilean researchers from trying to tame other viral diseases. Kalergis himself has become well known since he and his team developed a vaccine candidate that might one day protect newborn babies against the respiratory syncytial virus, a major cause of pneumonia and bronchitis in young children.

Now, his laboratory is rushing to create four prototype vaccines against SARS-CoV-2 using protein fragments, genetic material and live but harmless bacteria that can express some of the coronavirus’s components. If everything goes to plan, studies in humans could begin as soon as next year. And if any of his prototypes shows promise, Kalergis says, he will reach out to vaccine-producing companies outside Chile to help manufacture it.

“Our plan is to distribute this vaccine against SARS-CoV-2 to all countries that need it,” he says, “but with emphasis in our region.”

A visit to the vet in Peru

As cases of the new coronavirus disease climbed in China in early January, Mirko Zimic had a hunch. “I had a very strong suspicion that it would cross borders and affect many nations, in particular Peru,” he says. Zimic, a biophysicist at Cayetano Heredia University in Lima, had worked on vaccines for use in chickens and pigs. He called colleagues at FARVET, a veterinary pharmaceutical company in Chincha, and proposed that they work together on something neither had done before: making a human vaccine.

The researchers used insect cells to manufacture coronavirus spike proteins to provoke an immune response. Zimic and his colleagues will inject these into mice to test them. But there’s an issue: if those tests are successful, the next step will be to immunize monkeys and then infect them with the coronavirus to see if the vaccine works. Peru has very little capacity to perform such experiments, Zimic says.

In 2016, FARVET began negotiations with Peru’s science agency, CONCYTEC, to be allowed to manufacture human vaccines. But Zimic suspects that intense political turmoil stopped the deal; since 2016, three former Peruvian presidents have been accused of corruption. One killed himself before being detained.

Finding a COVID-19 vaccine, even one that doesn’t work, represents much more than a way out of the pandemic, says Zimic. It’s an opportunity to make the Peruvian government aware of the need to value science. Some things could soon change: FARVET has again reached out to health authorities to be certified as a human-vaccine maker.

“We will not always be able to buy or import solutions,” says Zimic. “It is my dream that in Peru, as well as in several countries in Latin America, we start producing our own vaccines.”