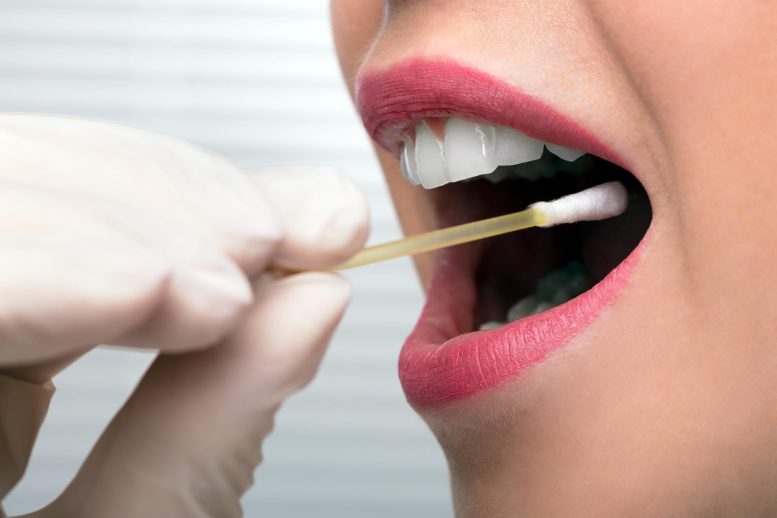 “It’s like having your brain tickled through your nose.” “Longest five seconds of my life.” “Not for the faint-hearted.”

The swab to take the COVID-19 test, known as a nasopharyngeal swab, is not a pleasant experience. To obtain a thorough sample, health care workers need to scrape deep in the nasal cavity. More concerningly, the swab sticks themselves fell in short supply during the early stages of the COVID-19 crisis in the U.S., limiting the number of tests providers could run.

But it’s increasingly clear that the virus is also detectable in saliva. A team of University of Chicago scientists is exploring whether a saliva-based test for COVID-19 may be an effective alternative to the nasopharyngeal swab.

COVID-19 is primarily an upper respiratory disease, settling in the nose and sinuses, so the long, thin nasopharyngeal swabs become the primary method for testing. After health care workers take the sample, they load it into a machine that extracts genetic material from the virus and copies it. If there are COVID-19 genes in the mix, they get labeled with a light-up tag.

The machines running this test across the country are almost all based on a particular technique called qPCR, which has been in use for many years. But scientists are also testing a newer detection system called droplet-digital PCR or ddPCR. In theory, the new system could be more sensitive than qPCR, able to get a positive reading even if there are lower amounts of the virus in the sample. “It could provide clinicians with a quantitative measure of how much virus is present, beyond a simple yes or no,” said Prof. Nishant Agrawal, a UChicago surgeon-scientist and an investigator on the study who has been working on digital PCR and saliva for over a decade.

“It’s possible that people who have the virus but don’t show symptoms, may have a smaller amount of virus that wouldn’t show up on tests,” said Assoc. Prof. Jeremy Segal, a UChicago pathologist and an investigator on the study. “If they’re still able to spread the virus, being able to detect those people would be very important. We just don’t know yet—there are so many unknowns still.”

As the pandemic ramped up in Illinois in late March and early April, Segal and Asst. Prof. Evgeny Izumchenko, a University of Chicago Medicine geneticist, teamed up with Assoc. Prof. Savas Tay’s lab at the Pritzker School of Molecular Engineering to test out ddPCR methods for detecting COVID-19.

Because ddPCR is newer and fully automated testing is still being developed, scientists have to carry out the steps by hand. Because they were already using the ddPCR system on nasopharyngeal swabs, they decided to also try using saliva.

“The beauty of it is that it’s less invasive, and you could allow people to collect their own samples; everyone knows how to spit,” said Izumchenko.

To solicit patients to volunteer for the trial, the researchers set up an additional booth at UChicago Medicine’s curbside testing for COVID-19. After UChicago Medicine workers took their samples for the standard nasopharyngeal swab run by the hospital diagnostics lab, the volunteers would go over to the booth, get a second nasopharyngeal swab and spit in a tube for the trial. That way researchers could compare the two methods directly: Investigators run the ddPCR tests on both the nasal swabs and saliva samples at Tay’s lab, and the hospital runs the standard qPCR test.

The study is ongoing, but in the trial samples collected and tested so far, saliva ddPCR tests have matched up exactly with the hospital’s results.

One finding that has surprised researchers is the degree of variability in the amount of virus detected in COVID-positive patients arriving for curbside screening.

“The amount of virus detected among these symptomatic patients varies by up to a million-fold,” Segal said. “There’s so much we don’t know about that, in terms of its relationship to what part of the infection cycle the patient is in, as well as how it might be affected by different sampling methods. But the extreme range and variability present a substantial challenge from a diagnostics standpoint.

“We still don’t know the clinical meaning of this high degree of variability, or how it is related to transmissibility,” he said.

In further studies, the scientists would like to follow cases over time and see if there’s a consistent shape to the amount of virus that patients carry over the course of an infection, or whether the viral load corresponds to the severity of infection and treatment regimen.

“There also have been some early indications that you might be able to get a positive reading from saliva for a longer period than you can with the nasal swabs,” Izumchenko said, “so we’d also like to test patients as they’re getting ready to leave the hospital to see if they’re still positive.”

All the researchers were happy with the collaboration between their labs. They plan to continue working together and applying techniques for problems beyond COVID-19, such as cancer or HPV. “It really gave rise to a new hub that, under different circumstances, might never have happened,” said Izumchenko.