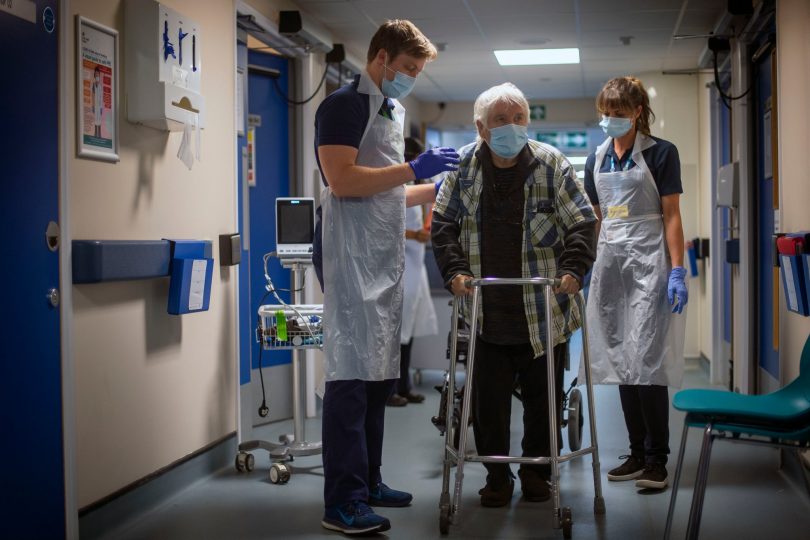 A steroid, dexamethasone, is the first drug shown to help save severely ill coronavirus patients, according to scientists in Britain.

LONDON — In an unexpected sign of hope amid the expanding pandemic, scientists at the University of Oxford said on Tuesday that an inexpensive and commonly available drug reduced deaths in patients with severe Covid-19, the illness caused by the coronavirus.

If the finding is borne out, the drug, a steroid called dexamethasone, would be the first treatment shown to reduce mortality in severely ill patients. Had doctors been using the drug to treat the sickest Covid-19 patients in Britain from the beginning of the pandemic, up to 5,000 deaths could have been prevented, the researchers estimated.

In severe cases, the virus directly attacks cells lining the patient’s airways and lungs. But the infection also can prompt an overwhelming immune reaction that is just as harmful. Three-quarters of hospitalized Covid-19 patients receive some form of oxygen.

Until now, hospitals worldwide have had nothing to offer these desperate, dying patients, and the prospect of a lifesaving treatment close at hand — in almost every pharmacy — was met with something like elation by doctors.

“Assuming that when it goes through peer review it stands — and these are well-established researchers — it’s a huge breakthrough, a major breakthrough,” said Dr. Sam Parnia, a critical care doctor and associate professor of medicine at the Grossman School of Medicine at New York University. “I cannot emphasize how important this could be.”

But the report also comes quick on the heels of a series of blunders and retractions in the scientific literature, as scientists rush to publish research about the coronavirus. While hospitals in the United Kingdom were able to begin treating severely ill Covid-19 patients with dexamethasone on Tuesday, many experts in the United States demanded to see the data and the study itself, which have not yet been peer reviewed or published.

“It will be great news if dexamethasone, a cheap steroid, really does cut deaths by ⅓ in ventilated patients with COVID19,” Dr. Atul Gawande, the surgeon and author, wrote on Twitter, “but after all the retractions and walk backs, it is unacceptable to tout study results by press release without releasing the paper.”

There is no vaccine against the coronavirus, and the only treatment known to be effective, an antiviral drug called remdesivir, only shortens the time to recovery.

“Dexamethasone is the first drug to be shown to improve survival in Covid-19,” one of the trial’s chief investigators, Peter Horby, a professor of emerging infectious diseases at the University of Oxford, said in a statement. “The survival benefit is clear and large in those patients who are sick enough to require oxygen treatment.”

Dr. Horby added that dexamethasone should now become the “standard of care in these patients,” noting that it was inexpensive, was widely available and could be used immediately.

The drug was not studied in patients outside of the hospital, however, and was not beneficial to patients who were not on respiratory support.

Many steroids reduce inflammation in the body, and dexamethasone is among those that doctors have been trying in Covid-19 patients overwhelmed by so-called cytokine storms — uncontrolled immune responses so powerful they kill some patients.

Many doctors had feared the drug might actually exacerbate the infection by preventing the immune system from attacking the virus. Though Dr. Parnia had treated patients with steroids and seen improvement, “there had not been such a large trial comparing no steroids with steroids.”

Even without published results, Matt Hancock, Britain’s health secretary, said doctors in the country’s National Health Service were able to begin using the steroid as the standard treatment for hospitalized coronavirus patients on Tuesday afternoon. The drug costs less than $1 per day of treatment on a single patient.

The government started stockpiling dexamethasone several months ago based on signs that it could help patients, Mr. Hancock said, and now has 200,000 doses on hand.

The trial led by Dr. Horby was a randomized, controlled clinical trial, the gold standard for medical research. About 2,100 severely ill Covid-19 patients were given low doses of dexamethasone, orally or intravenously, once a day. Their outcomes were compared with 4,300 patients who had received the usual care.

The trial was stopped early, because the investigators felt that the benefit was obvious. But they said that the drug did not help moderately ill patients who were not receiving oxygen.

Corticosteroids like dexamethasone were used during outbreaks of SARS and MERS, which were also caused by coronaviruses. Those drugs were associated with worse outcomes, another reason for hesitation.

An earlier, much smaller trial in Spain of patients with acute respiratory distress, also seen in those ill with Covid-19, found that dexamethasone treatment may reduce the amount of time patients are on ventilators and may reduce deaths.

“What this is effectively doing is tamping down inflammatory responses in patients,” Stuart Neil, a professor of virology at King’s College London, said in an interview. “It’s almost certain this is affecting the body’s response against the virus, rather than inhibiting the virus itself.”

Dr. Stephen Griffin, an associate professor in virology at the University of Leeds, said that it would be important to study the use of dexamethasone in combination with antiviral treatments like remdesivir.

Dexamethasone has been around for more than 50 years and is widely used to treat diseases like lupus, arthritis, allergies and cancer. Though it may cause side effects, it is generally safe.

Yet many experts urged caution regarding the results of the new study. With scientists rushing to identify treatments for the virus as the outbreak spread around the world, some high-profile findings have had to be retracted or walked back in recent months.

On Monday, the Food and Drug Administration withdrew its emergency use authorization for hydroxychloroquine and chloroquine, drugs touted by President Trump as treatments for Covid-19. Earlier this month, the New England Journal of Medicine and The Lancet retracted major studies because of flawed data.

Dr. Jose Scher, a rheumatologist at New York University, said the drug may represent a “major breakthrough,” but noted that the data have yet to be published in full.

“It has to be published and peer reviewed, but if it is in fact true, this is a major breakthrough,” he said. But “all these communications, without the actual data, should be taken with caution.”

Hospitals in the United States appeared to be waiting to see the full study before making changes.

Dr. Hugh Cassiere, director of critical care medicine at Northwell Health’s North Shore University Hospital, said he would wait for the study to be peer reviewed before making changes, and would scrutinize the data personally. “I want to know, ‘What was the severity of the patients’ illness? Were the patients very, very sick?’”

Randomized controlled trials are supposed to account for the differences between patients. “But sometimes that’s not the case, and you have patients who are sicker in the placebo group, and they’re more likely to die compared to the treatment group, so you’re not really comparing apples to apples,” he said.

Doctors also need more information about the drug’s side effects, he said.

“This group has credibility,” tweeted Dr. Jeremy Faust, an emergency room physician at Brigham and Women’s Hospital in Boston. “But what are the neurological outcomes? Do we just cause prolonged suffering in one in eight patients on vents? Or did we help many? No clue!”