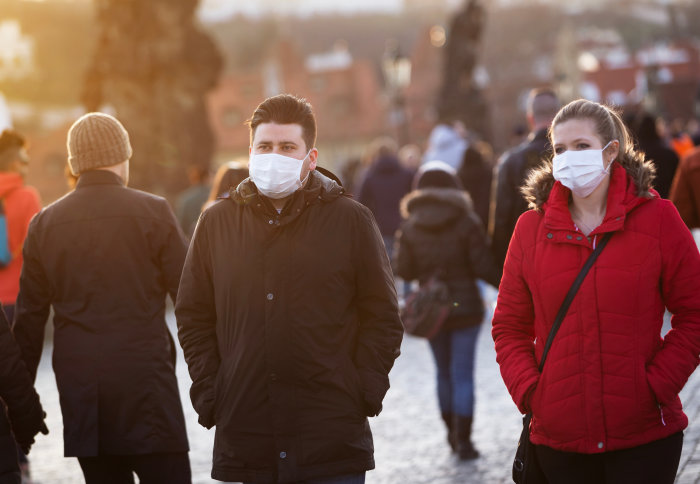 There is no evidence that declines in transmission of the SARS-CoV-2 coronavirus in some countries are the result of herd immunity, says new analysis.

Herd immunity is achieved when a significant proportion of the population is protected from infection, either through becoming immune following a previous infection, or through other natural means, such as cross protection from exposure to related viruses, or through a vaccination programme.

The authors of the new article, from Imperial College London and the University of Oxford, looked at whether the observed decline in COVID-19 cases and deaths in many countries in Europe, North America and parts of Asia could be the result of herd immunity. If this was the case, there would be roughly similar rates of COVID-19 mortality, and levels of antibodies to the coronavirus across different countries. It would also imply that the virus might have a low fatality rate, as the deaths recorded would only make up a small proportion of those who had been infected.

However, the researchers found little evidence for herd immunity and concluded that the decline in cases and deaths was a result of lockdowns, behavioural shifts, social distancing and other interventions. This means that the epidemic is still at a relatively early stage and that a large proportion of the population in these areas remain susceptible to the virus. The authors suggest that no country has yet seen infection rates sufficient to prevent a second wave of transmission if lockdowns and social distancing measures were relaxed without other measures in place.

The authors also conclude from data on deaths and antibody levels from Europe that the infection fatality rate is high, at between 0.5 – 1 percent, compared with less than 0.1 percent fatality rate for seasonal flu.

The study is published in a peer-reviewed correspondence article in The Lancet by researchers from the MRC Centre for Global Infectious Disease Analysis, Jameel Institute (J-IDEA) at Imperial College London, and the University of Oxford.

Study author Dr Samir Bhatt, from Imperial, said: “As the world copes with the coronavirus pandemic, many countries have achieved control through great effort and cost.  In our peer-reviewed letter we present data that paints an clear picture of the current state of the pandemic: only a small percentage of people have been infected, the infection fatality rate is higher than seasonal flu, and this terrible disease is unlikely to go away on its own. Claims to the contrary, suggesting that we have already reached herd immunity, can be firmly rejected by independent, credible data from around the world. In short, the pandemic is far from over.”

The researchers reached their conclusions after looking at multiple data sources. They found that the cumulative mortality rate from COVID-19 plateaued at very different levels in different countries, whereas with herd immunity this might be expected to be broadly the same. For example, there are large differences in mortality rates between Germany, the Netherlands and Italy, which all have good quality health care and testing capacity.

Countries that went into lockdown early also experienced fewer deaths in subsequent weeks, according to the analysis, suggesting the differences in the timings and stringency of lockdowns and interventions explain the different COVID-19 death rates in these countries. The authors argue this would not have been the case if epidemics had faded out due to herd immunity being reached.

Studies on the number of people with antibodies to SARS-CoV-2 show large variation from 0.5% to nearly 15% in different regions included in the study. This suggests a minority of people have been infected so far. If herd immunity had been reached, the percentage of people with antibodies would be expected to be higher and similar across all areas. The antibody tests are new and are not 100% accurate, but the authors show a strong relationship between the % of the population with antibodies and mortality rates from COVID-19. This means the test results are accurate enough to roughly tell us something about how many people have caught SARS-CoV-2 in an area.

Study author Dr Lucy Okell, also from Imperial, said: “We see huge variation between countries so far in COVID mortality rates and antibody prevalence (showing how many people have been infected in the past). This variation occurs even between areas in the same country (e.g. Spain), which are otherwise similar in terms of age, health systems, and geographic location. This is very difficult to explain if herd immunity had been reached, because why would herd immunity to be achieved at such different levels in different places?

“On the other hand, areas which locked down earlier after the virus began to spread have had much lower mortality rates so far. Unfortunately we must conclude that herd immunity has not been reached and the virus can still spread substantially unless we continue to take measures against it.”

Dr Robert Verity, another study author from Imperial, added: “Lockdowns and other social distancing measures have come at a heavy cost to society. Understanding how these measures have altered the course of the COVID-19 pandemic is vital when looking back at our actions, and when looking forward at the road ahead. In our letter, we use simple arguments based on publicly available data to show unequivocally that suppression measures are responsible for the recent declines in deaths seen in European countries. To have altered the course of a disease is a huge achievement, but it comes with a flip side: that we may be a long way from herd immunity and so vigilance will be needed in the months ahead.”