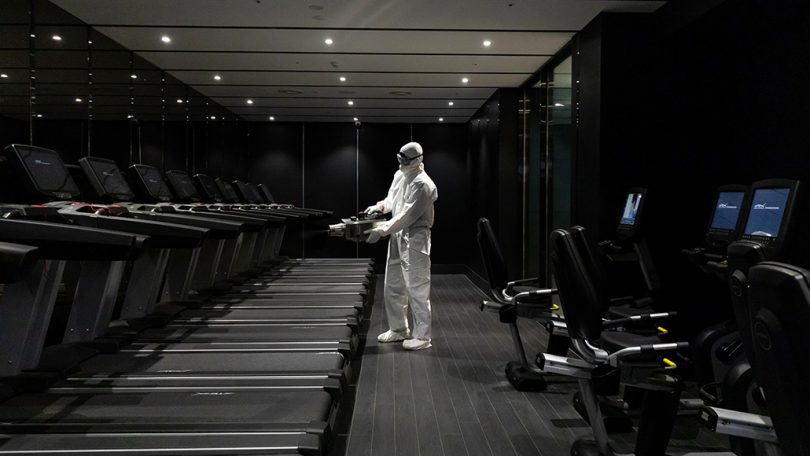 Outbreaks in restaurants, offices and other venues could guide strategies for lifting social distancing guidelines

Several months into the COVID-19 pandemic, countries are looking for ways to restart their economies, public health officials are looking to guide safe reopening and people are eagerly looking to escape cabin fever. But tough lessons have surfaced from countries that were hit early in the pandemic and have already reopened.

Consider South Korea: In April, after new cases had steadily declined to single digits, the country began easing lockdown restrictions. But that respite was short-lived. On May 6, a 29-year-old man tested positive for SARS-CoV-2, just a few days after visiting five dance clubs in one night in Seoul’s Itaewon district. On May 8, South Korea responded quickly, postponing plans to reopen schools and urging bars and clubs to shut down again for a month. As of June 8, the Korean Centers for Disease Control had linked the sick man to 96 other clubgoers who got COVID-19, plus 178 people with whom those clubgoers came into contact.

That wasn’t the only cluster that put the brakes on South Korea’s reopening plans. Soon more clusters popped up in an online retail center, a theme park, a table tennis club and a handful of churches.

Other countries should expect similar starts and stops upon relaxing stay-at-home rules. “Reopening is not a one-way street, and we may need to make a U-turn,” says Andrew Noymer, an epidemiologist at the University of California, Irvine.

Studying these kinds of transmission clusters as well as common environments where COVID-19 moves easily from person to person provides a glimpse of how to avoid the U-turns. To that end, epidemiologist Gwenan Knight and her colleagues at the London School of Hygiene and Tropical Medicine compiled a massive database of worldwide COVID-19 case clusters based on media accounts, published scientific studies and government health department reports.

As of June 10, their database included 231 cluster events, or groups of cases tied to the same place. The data are limited to known clusters and to what the patients involved could recall and what they told investigators.

Households were the most common place for transmission, accounting for 15 percent, or 38 of 231, cluster events. And mealtime was prime time. “It’s not the eating. It’s the sitting around and talking,” Noymer suspects. SARS-CoV-2 primarily spreads via respiratory droplets and direct contact. While sharing food or utensils could theoretically pose a risk for infection, no clusters have been linked to eating itself. A study published June 3 in Emerging Infectious Diseases found traces of SARS-CoV-2 genetic material on chopsticks used by patients in Hong Kong, but whether virus particles could survive on a chopstick and actually infect someone remains unknown.

The largest known clusters occurred in settings that are by now well publicized: ships (the Diamond Princess cruise ship and the USS Teddy Roosevelt aircraft carrier), food packing plants and prisons. Dormitories in Singapore, where migrant workers live in cramped conditions, also saw large numbers of infections. In all of these places, people live or work in close quarters over long periods of time.

The dataset also points to settings where one activity may be riskier than another, says Quentin Leclerc, an epidemiologist on Knight’s team who manages the database. “For example, why have we found clusters associated with one type of indoor sport, but not another?” In a cluster of 112 cases stemming from Zumba classes in Cheonan, South Korea, a pilates and yoga instructor from the same gym was among those infected. But that instructor did not subsequently pass the virus on to any students. High intensity sports that involve a lot of heavy breathing in confined spaces could be prime spots for transmission, while lower intensity activities, like yoga, might not be as risky (SN: 5/19/20).

Only one transportation cluster — three cases on a bus — appears in the database, but that doesn’t mean the virus doesn’t spread on buses or trains. “Transport outbreaks are very difficult to identify,” says Yuguo Li, an engineer at the University of Hong Kong who studies infectious disease transmission.

Of course there could be other possible transmission settings that researchers don’t know about or haven’t been able to study. But the case clusters below might offer some useful insights.

A restaurant with poor ventilation

A cautionary tale of poor ventilation comes from Guangzhou, China, on the eve of Lunar New Year. A 63-year-old woman and her family walked into a crowded restaurant for lunch, after returning from Wuhan the day before. That same day she developed a fever and cough; she later tested positive for the coronavirus.

Of the 89 other customers who visited the restaurant that day, 10 fell ill with COVID-19, including the woman and four members of her family. Patients are most contagious around the time their symptoms emerge, so this woman was most likely the index case — the first person in the cluster to become infected.

The five other infections occurred in families seated at the tables on either side of hers, less than three feet away. Security footage shows that the three families didn’t interact or touch the same objects. The droplets the woman produced as she chatted with her family were unlikely to reach the other tables on their own. So the virus probably got some help from the air conditioning unit blowing directly over the row of three tables, researchers from the Guangzhou Center for Disease Control and Prevention report in the July Emerging Infectious Diseases.

The restaurant had no windows. The only source of outside air was an exhaust fan in a bathroom. The air conditioning unit only recirculated indoor air, blowing the woman’s respiratory droplets to the nearby tables. With very little fresh air coming in, the concentration of droplets would get higher and higher, says Yan Chen, an engineer at Purdue University in West Lafayette, Ind.

When the restaurant was empty during lockdown, Li and his colleagues tested the theory with a few human volunteers, some mannequins and harmless gas droplets to trace and simulate the spread. Their preliminary simulations, posted online April 22 at medRxiv.org, show that the air conditioning flow in the room could have created a bubble of small droplets around the three tables, and that there was an exceptionally low amount of fresh air in the room. That’s where the blame for infection lies, Li’s team argues. With more fresh air in the mix, droplet concentration would probably have been lower.

A case cluster in a South Korean call center provides an example of how COVID-19 can emerge in a bustling open-office setting — and how to intervene and stop transmission.

The call center in downtown Seoul occupies four floors in a 19-story building that has commercial offices and residences. When almost all of building users — 1,143 people — were tested, 97 were positive for SARS-CoV-2; 94 of them worked in call center offices on the 11th floor, researchers report in the August Emerging Infectious Diseases.

Employees sat side by side, talking on the phone for long shifts. Because a striking majority of cases were concentrated in a single open work area on one side of the building, researchers suspect that prolonged proximity, rather than, say, touching the same elevator button drove the spread.

At the call center, the Korean CDC was extremely thorough in its attempts to find cases and stop their spread, testing 99.8 percent of the people who had any contact with the building and quickly isolating all positive cases. Beyond the building, investigators tracked 225 household contacts of those positive cases, and 34 tested positive. Through this intense screening process, the agency cut transmission chains and prevented new cases from emerging. “It shows how intervention can work,” says Werner Bischoff, an epidemiologist at Wake Forest University in Winston-Salem, N.C.

A sobering warning about the importance of social distancing comes from a family in Irbid, Jordan, about 60 miles north of Amman. Defying a local ban on large gatherings, the family held a wedding celebration in March. Of the roughly 360 people who attended, 76 tested positive for the coronavirus in the four weeks that followed, researchers report in the September Emerging Infectious Diseases.

Two days before the ceremony the bride’s 58-year-old father, who had traveled from Spain, felt feverish and developed a runny nose and cough. He tested positive for the coronavirus two days after the wedding.

Though he did not recall having contact with anyone who had COVID-19 in Spain, scientists believe he sparked the cluster. In Jordan, it’s common for the bride’s family to greet all of the guests at the reception entrance, usually with a hug or a kiss. “These factors, in addition to crowded dancing and close face-to-face communication, likely contributed to the large number of infections from this wedding,” the researchers write.

Some unknown variables — like the effectiveness of fabric masks and the degree to which infected people without symptoms spread the virus — could influence the risk equation for coronavirus in any of these and other settings.

As restrictions lift, people will have to make tough choices about in-person interactions. Social distancing is still important. You might limit your contacts, but other people you encounter might not. As restrictions ease, some public health officials suggest creating COVID-19 “bubbles,” or expanding social circles to people who agree to observe the same precautionary measures.

Restaurants and workplaces can take steps when they reopen to try to limit transmission, as some have already done. Installing plexiglass barriers between tables and improving ventilation by opening windows, serving customers outside, turning on exhaust fans and using HEPA filters could help lower transmission risk. Keeping tables or desks at least six feet apart is also a good idea. The CDC has released reopening guidelines for everything from restaurants to water parks.

Whether more outdoor cases will emerge as temperatures rise and people spend more time outside is an open question. Fresh air and sunlight could limit cases in outdoor settings, or clusters could emerge in newly opened outdoor settings, such as swimming pools or summer camps. Data on how the virus behaves in summer just don’t exist yet.

If South Korea’s thwarted first attempt at loosening restrictions has taught us anything, it’s that reopening and lifting social distancing practices comes with one certainty: New COVID-19 infections will happen. Hugs and high-fives are still a long way off. “This isn’t a marathon,” Noymer says. “It’s a 26.2-mile sprint.”