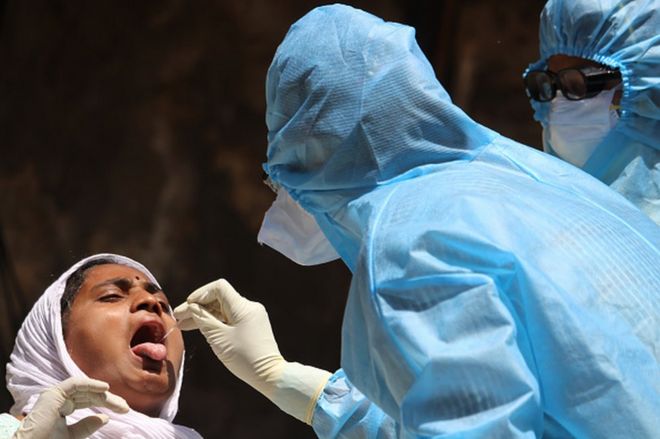 More men are dying from Covid-19 than women around the world, data shows.

In Italy, China and US, for example, more men have been infected, and a higher proportion of men have died.

Sabra Klein, a scientist who studies sex differences in viral infections at Johns Hopkins Bloomberg School of Public Health, says “being male is as much a risk factor for the coronavirus as being old“.

But something puzzling is happening in India.

New research by a group of scientists in India and US shows that although men make up the majority of infections, women face a higher risk of dying from the coronavirus than men.

The study, based on Covid-19 deaths in India until 20 May, shows early estimates that 3.3% of all women contracting the infection in India were dying compared to 2.9% of all men. (India had a caseload of more than 110,000 with 3,433 deaths and a fatality rate of 3.1% when the study was conducted.)

I asked SV Subramanian, a professor of population health at Harvard University and one of the leader authors of the study, what this implied.

He told me that the narrative of calculating the Covid-19 fatality rate by groups has conflated two key metrics – mortality risk and mortality burden.

Mortality risk measures the probability of death in a specific group- in this case, total number of deaths of women divided by confirmed infections among women.

On the other hand, mortality burden gives you the number of deaths among women as a percentage share of the total deaths, both men and women.

Prof Subramanian says for the large part, the statistics have looked at the latter – men having a greater share of total deaths (63% in India, hewing to international data) – but “inferred the former risk”.

“Our overall conclusion is that, when infected, women do not seem to have any specific survival advantage [in India],” says Prof Subramanian.

But the findings are certainly striking because they run counter to what has been observed elsewhere in the world.

For one, men are more likely to suffer from co-morbidities or underlying health conditions, like cardio-vascular disease and hypertension, says Kunihiro Matsushita, a professor of epidemiology at the Johns Hopkins Bloomberg School of Public Health.

Men also smoke more than women in many countries, and some studies have shown that men wash their hands less frequently than women.

Prof Matsushita says that studies he had participated in had shown that male patients have a higher risk of contracting severe Covid-19 infection.

Scientists also believe that women have a lower mortality risk because of sturdier immune defences. And have hormones like oestrogen which has “beneficial effects on upper and lower airways and is associated with stimulation of the immune response to upper airway infections”.

“In that regard, a higher case fatality rate in women than men in this report is certainly unique,” Prof Matsushita told me.

But he says the research data needs to be scrutinised in the context of how Covid-19 is diagnosed in India. “For example, is the opportunity to get a test same between men and women?” he wonders.

There could be more to this puzzle than what meets the eye.

Women outlive men in India and there are more older women than men. Is this leading to more deaths among women, as elderly people are vulnerable to the infection?

Also, women in India are more likely to delay going to doctors, and often self-medicate at home. And a woman’s health is more likely to be ignored in a household. So are women arriving late for testing and treatment?

Homemaker caregivers are more prone to contracting the infection – during the 1918 Spanish flu more women in India – relatively undernourished, cooped up in unhygienic and ill-ventilated dwellings, and nursing the sick – died than men.

“We need to dissect the gender data to find out more about what’s going on,” says T Jacob John, a retired professor of virology at Christian Medical College, Vellore.

Researchers agree. “We will keep a close watch and keep updating the results,” Prof Subramanian says.