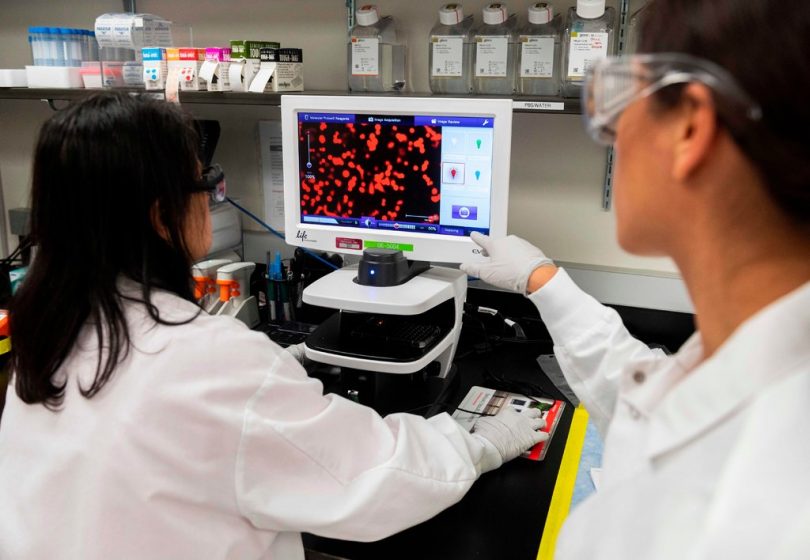 The Maryland-based company, which has never brought a product to market before, just made the biggest deal to date with the Trump administration’s Operation Warp Speed.

The federal government will pay the vaccine maker Novavax $1.6 billion to expedite the development of a coronavirus vaccine. It’s the largest deal to date from Operation Warp Speed, the sprawling federal effort to make coronavirus vaccines and treatments available to the American public as quickly as possible.

The deal would pay for Novavax to produce 100 million doses of its new vaccine by the beginning of next year — if the vaccine is shown to be effective in clinical trials. That’s a significant bet on Novavax, a Maryland company that has never brought a product to market.

With this deal, the federal government has now invested nearly $4 billion in companies pursuing vaccines, but has provided little information about how Operation Warp Speed is spending money, which agencies the funding is coming from or how decisions are being made.

That money has gone to six companies with varying track records and, in many cases, promising but untested technologies. British drugmaker AstraZeneca has received $1.2 billion in federal assistance for its vaccine, which uses a harmless virus to provoke an immune response. Moderna Therapeutics, which has received more than $500 million, also has never brought a product to market and is using a genetic technology that is valued for its speed but has never led to a successful human vaccine.

Some say the administration’s strategy — backing a variety of approaches, including some that are cutting-edge but may not work — is the best way to move quickly in the middle of a deadly pandemic. But critics say the public deserves to know more about how taxpayer money is being spent at this critical moment.

“It’s a black box,” said Peter Maybarduk, the director of the global access to medicines program at Public Citizen, a public interest group. “This could be one of the most important medical technologies of our time, and we know very little about how that money is being spent, and what conditions are being placed on it.”

Officials have given varying estimates of how many treatments and vaccines are part of Operation Warp Speed, and have declined to give the full list of which companies are participating. Congress has appropriated nearly $10 billion to support development of a coronavirus treatment or vaccine, but Trump administration officials have said that billions more could ultimately be spent, without providing additional details. A flurry of contracts with vaccine and drug manufacturers were recently made public, but the documents were heavily redacted and provided little information about the arrangements with the companies.

Officials have given varying estimates of how many treatments and vaccines are part of Operation Warp Speed, and have declined to give the full list of which companies are participating. Congress has appropriated nearly $10 billion to support development of a coronavirus treatment or vaccine, but Trump administration officials have said that billions more could ultimately be spent, without providing additional details. A flurry of contracts with vaccine and drug manufacturers were recently made public, but the documents were heavily redacted and provided little information about the arrangements with the companies.

“Adding Novavax’s candidate to Operation Warp Speed’s diverse portfolio of vaccines increases the odds that we will have a safe, effective vaccine as soon as the end of this year,” Alex M. Azar II, the health and human services secretary, said in a statement.

Until now, new vaccines have taken years to develop, and many vaccines fail in clinical trials when they turn out to be ineffective or to cause serious side effects. Many experts have said the aggressive timelines set by companies and government officials for a coronavirus vaccine are overly optimistic.

Mr. Erck said Novavax’s coronavirus vaccine uses the same technology as its other experimental vaccines, such as one for the flu, that have been tested in late-stage clinical trials. Novavax has recently brought in senior executives from established manufacturers like AstraZeneca and GlaxoSmithKline, he said.

“The risk they’re taking is that a company like ours — which doesn’t have a pipeline of already commercialized products — can we get to the big leagues and scale up?” he said. “And I think they’re placing the bet that we can.”

The U.S. investment comes after an international group, the Coalition for Epidemic Preparedness Innovations, awarded up to $388 million to Novavax in May to make its coronavirus vaccine available globally.

Several vaccine experts said Novavax’s vaccine would help diversify the federal portfolio by including another candidate that uses a protein-based vaccine that has worked against other pathogens, like hepatitis B. The Novavax vaccine uses microscopic particles that carry fragments of the coronavirus, prompting the body’s immune system to respond. Sanofi, which has received nearly $31 million in government funding, is also developing a vaccine that is based on viral proteins.

“This is a sort of diversification from other approaches, which makes a certain amount of sense,” said John P. Moore, a professor of microbiology and immunology at Weill Cornell Medical College in New York City. “You don’t want all of your eggs in one basket.”

Mr. Erck said the deal with the United States would allow Novavax to begin manufacturing the vaccines before the company concludes late-stage clinical trials, expected by the end of the year. The company would ensure that 100 million doses — enough for 50 million people to receive an initial shot and a booster — are delivered by the first quarter of 2021, if its coronavirus vaccine is proved safe and effective. In June, Novavax secured a $60 million contract from the Defense Department to guarantee the delivery of 10 million doses to vaccinate American troops for the coronavirus.

Novavax began early-stage safety trials in Australia in May, and the company has said it expects to make the results available this month. It said it planned to begin so-called Phase 3 efficacy trials by the fall of this year and could release interim data by the end of 2020.

Through its deal with the Coalition for Epidemic Preparedness Innovations, Novavax is also setting up manufacturing in other sites around the world, including in Europe and Asia, to serve populations outside the United States. The company is using its own facilities to scale up manufacturing and will also contract with outside companies, Mr. Erck said.

He and others have noted that more than one vaccine will need to succeed in order to vaccinate the entire world. “Right now, we need and want everybody’s to work,” he said.