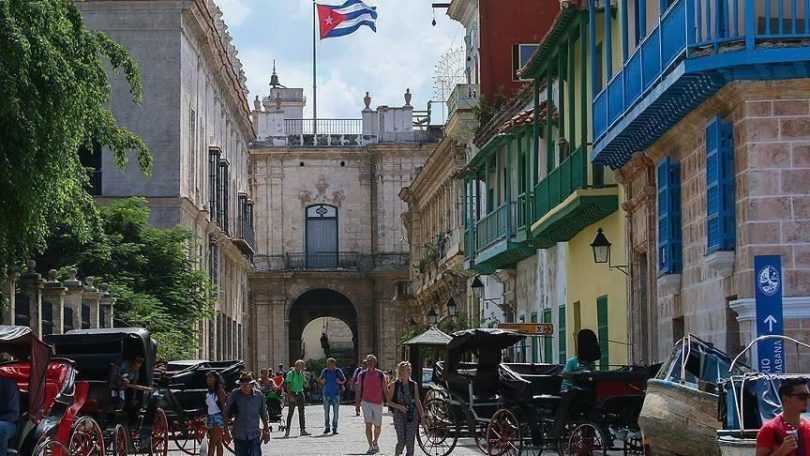 Cuba uses hydroxychloroquine and some other unique drugs in treatment of coronavirus, say Cuban medical authorities

Health authorities in Cuba are using low doses of the antimalarial drug hydroxychloroquine to effectively treat COVID-19 patients in the early stages of the disease.

“We do use hydroxychloroquine in the framework of the protocol for management of coronavirus patients,” Dr. Augustin Lage Davila, advisor to the president of BioCubaFarma and former director of the Centre for Molecular Immunology in Havana, told Anadolu Agency on Thursday. Boasting one of the highest ratios in the world in terms of doctor density, at 8.2 per 1,000 people according to the World Bank, Cuba has stood out as one of the most capable countries in the world to fight the deadly coronavirus pandemic with only 86 reported deaths so far and slightly over 2,400 cases.

The US state of Florida alone, which is a stone’s throw from the Caribbean nation, has registered over 4,000 deaths and at least 223,000 infections, according to Johns Hopkins University. Overall US infections have surpassed 3.1 million and fatalities have rapidly climbed to over 133,000.

“We are aware of the polemics around this product. Physicians here mostly have a good opinion of the results it has achieved, provided that it is used at an early stage in low doses and only with patients without comorbidities, which could be complicated by hydroxychloroquine,” Dr. Davila added.

He said Cuba will continue to use hydroxychloroquine on the “few active patients” left in the country, although it is “not the main” component of the Cuban protocol.

Praising BioCubaFarma’s role in battling the disease, Dr. Davila emphasized that hydroxychloroquine is only one of several drugs used in the protocol to treat coronavirus patients, and five other key drugs they use are unique to Cuba.

Patent-rich BioCubaFarma, the Cuban organization of Biotechnology and Pharmaceutical Industries, he said, is a holding company that manages and coordinates national efforts in the biopharma sector to produce medicines and medical equipment, with 34 companies under it and more than 20,000 employees.

The other five medical drugs that Dr. Davila mentioned are Recombinant Human Interferon alpha-2b, a combination of interferon alpha and interferon gamma named HeberFERON, Biomoduline T, Peptide CIGB-258 (Jusvinza) and the humanized monoclonal antibody Itolizumab. Some of these drugs were effectively used in the treatment of the mosquito-borne tropical disease dengue fever and cancer in the past.

Another professor at the forefront of the COVID-19 fight in Cuba, Macias Abraham, the director of the Institute of Hematology and Immunology in Havana, said “convalescent plasma transfusion is a safe and effective treatment,” but the patient who has contracted the coronavirus must be treated “as soon as possible” within 16 days of admission to the hospital.

“We have been in discussions with many Turkish organizations and companies before COVID-19, and we continue to develop our relations in the health sector,” Davila said, adding he has been to Turkey twice.

“We will be more than happy to see Turkish and Cuban organizations developing a vaccine for the coronavirus disease,” he added.

Cuban-Chinese joint venture the Cuban Biotech Center started three years ago, and three Cuban joint venture companies have long been operating in three different Chinese cities, Davila said. He stressed that a new agreement was signed in 2019 to deepen cooperation in research and development on cancer and cardiovascular diseases, among others, which will start in a facility in Hunan this year.

The two ideologically aligned countries renewed for the next five years a memorandum of understanding (MoU) first signed in 2004 which established the basis for “strategic cooperation” in biotechnology.

Dr. Davila said he hopes one day that the Cuban health sector will achieve this in Turkey as well.

Cuba would consider extending virus help to US

Out of the 111 collaborators that make up the three brigades, 76 will work in Equatorial Guinea, 19 in Sao Tome and Principe and 16 will travel to Sierra Leone.

Cuban ambassador to Turkey Luis Alberto Amaros Nunez told Anadolu Agency on Thursday that with the three new brigades of Cuban health professionals who arrived in Africa, the number of these brigades around the world have been increased to more than 40 in 38 countries. “As the Cuban Minister of Foreign Affairs, Bruno Rodriguez, said recently, ‘this effort is welcomed by peoples with gratitude,'” Amaros said.

He also explained that medical contingents are already working in more than 70 countries to confront the pandemic in a quiet and modest way, as it should be, under the leadership and authority of national governments.

The ongoing US embargo, however, had caused shortages of medical supplies, food and fuel even before the pandemic. Now Cuba is having a hard time accessing life-or-death equipment to combat the disease.

“Anyone with a shred of decency will understand that the blockade puts remarkable pressure on Cuba to ensure the material inputs and equipment that support the public healthcare system and those specifically required to address this pandemic,” said Cuba’s Foreign Ministry in an exclusive statement to Anadolu Agency in April.

The United Nations, members of the British Parliament and European Union countries have called for the removal of all international trade barriers and for sanctions against Cuba to be lifted to no avail.

Reminding that the Cuban International Contingent Henry Reeve for cooperation in case of disasters and epidemics was created in 2005 precisely in the context of Hurricane Katrina that devastated the southern state of New Orleans, Amaros said Cuban medical help will always be there for anyone in the context of “solidarity and humanity.”

Its [Henry Reeve Contingent] assistance was offered to the US Government at that time, but it was rejected. Nowadays, the current US Administration has increased significantly its aggresive attacks to Cuba. So, the situation you presented is a subjective one with not precedents, and that makes the analysis difficult. Different elements have to be considered by the appropriate Cuban authorities for that complexity, but I think that solidarity and humanity will be part of the analysis,” Amaros said.

Wealth does not bring health, and sanctions are futile actions, COVID-19 has taught the world.