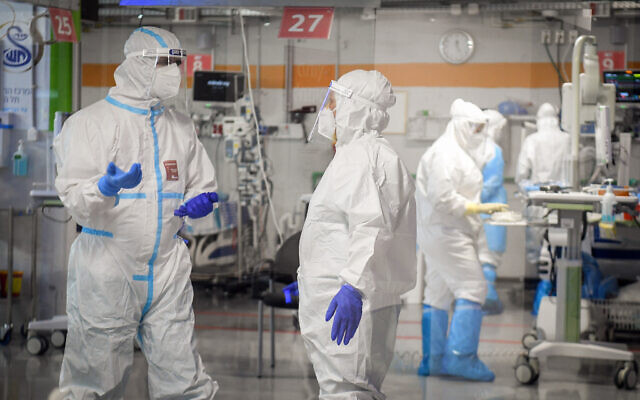 This is the second case at Sheba Medical Center in which a patient recovered from the virus and was subsequently reinfected.

A doctor at Sheba Medical Center in Tel Hashomer tested positive again for the novel coronavirus three months after initially recovering from the disease.
The doctor “tested positive again because she has remnants of her first virus still floating around in her body,” a hospital spokesperson told The Jerusalem Post on Sunday.
The doctor suffered from fever, cough and muscle pain when she tested positive for the virus in April, but she recovered and tested negative in May and June.
Earlier this month, she came in contact with a confirmed patient and subsequently tested positive for the virus.
The cases are the latest in a series of incidents of suspected reinfection that have raised questions concerning how long immunity against the virus lasts.
In May, a 45-year-old woman from Jisr e-Zarka tested positive for coronavirus after being readmitted to Hillel Yaffe Medical Center in Hadera, suffering from fever and chest pains. This came a month after she was discharged after recovering from the virus and testing negative twice.
Several studies are attempting to figure out how long protection provided by antibodies will last, Dr. Maria van Kerkhove, the World Health Organization’s COVID-19 technical lead, said last week, adding that some initial studies have found they “may wane after a couple of months.”
With coronaviruses such as SARS and MERS, people had some form of immunity for about a year or even longer, but with other human coronaviruses that circulate regularly, the immunity period is much shorter, Kerkhove said. This is “early data,” and more studies are needed, she said.
Preliminary studies in China, Germany, the UK and elsewhere have found patients infected with the novel coronavirus make protective antibodies as part of their immune system’s defenses, but these appear to last only a few months.
That raises big problems for developers of potential COVID-19 vaccines, experts say, and for public health authorities seeking to deploy them to protect populations from future waves of the pandemic.
To be truly effective, COVID-19 vaccines “will either need to generate stronger and longer-lasting protection… or they may need to be given regularly,” said Stephen Griffin, a Leeds University associate professor of medicine. “And those things are not trivial.”
Source: https://www.jpost.com/health-science/israeli-doctor-reinfected-with-coronavirus-3-months-after-recovering-635550