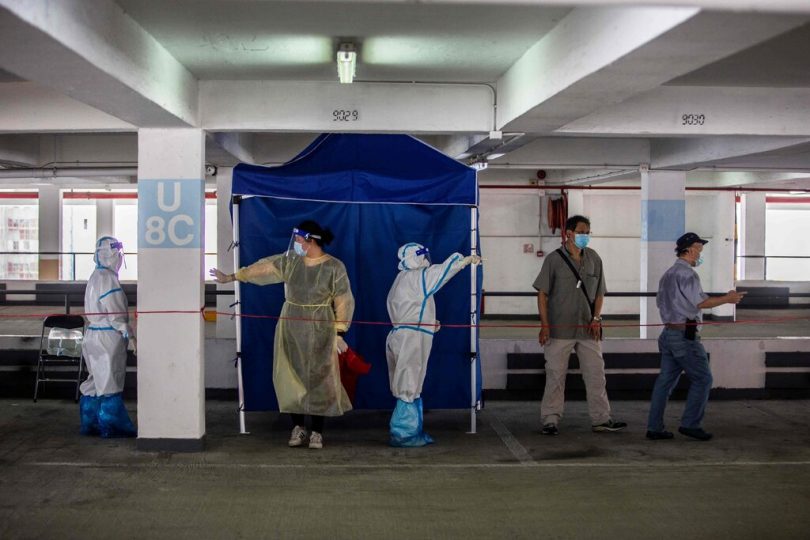 Doctors are seeing more cases a day than they had in previous outbreaks, and a number of infections with unknown origin have made the outbreak harder to contain.

Hong Kong once seemed like a model for how to control the coronavirus. Schools were open. Restaurants and malls buzzed with crowds. Buses and trains operated as usual, with residents dutifully wearing face masks on board.

But a new wave of infections in recent days has put the city on edge. Hospitals are now seeing more cases a day than they ever have during the pandemic. More important, health officials are unable to determine the origin of many of these cases, despite having a robust contact tracing system in place.

The government reported 73 cases on Monday, one of the highest totals for a single day since the coronavirus emerged nearly seven months ago in mainland China. In short order, the virus has spread across the city, infecting clerical staff at a government-run eye clinic, residents at a senior center and cleaning workers at the airport.

“The situation is very serious, and there is no sign of it coming under control,” Carrie Lam, the chief executive of Hong Kong, said on Sunday as she announced new restrictions aimed at slowing the spread of the virus.

As governments around the world look to relax rules put in place to combat the virus, Hong Kong’s experience provides a cautionary tale.

Lifting social-distancing restrictions too swiftly, experts say, can open the door to fresh outbreaks. And with a vaccine still many months away, they say, even the most vigilant countries are susceptible to sudden surges in cases. China, Japan, South Korea and Australia are all grappling with outbreaks of the virus.

“It’s really, really alarming,” David Hui, the director of the Stanley Ho Center for Emerging Infectious Diseases at the Chinese University of Hong Kong, said of the recent outbreak. “Once you loosen the restrictions too much, you face a rebound.”

The city had been widely praised by international experts for its response to the pandemic. It moved quickly to tighten its borders and impose quarantine rules, containing outbreaks traced first to travelers from mainland China and then to Hong Kong residents returning from Europe and the United States.

But the latest outbreak has puzzled top health experts.

Officials have so far been unable to trace how a significant number of people caught the virus, a worrisome sign, epidemiologists say, that makes it more difficult to break the chain of transmission. Most people who tested positive for the virus have not traveled and have not been linked to known clusters.

Dr. Hui said that previous outbreaks in Hong Kong were effectively contained before they could spread in the community unchecked. “You could just isolate close contacts, quarantine them and stop the outbreak,” he said. This time, he said, “it’s quite difficult because we had a lot of silent transmission that has entered Hong Kong already.”

Many residents have attributed the outbreak to people who have entered Hong Kong recently without undergoing the standard 14-day quarantine. They have urged the government to stop granting exemptions to some business travelers and airplane pilots, but the government, which is struggling with a recession, has defended the exemptions as necessary.

After easing restrictions on daily life in recent weeks, Hong Kong officials are once again imposing tough measures aimed at slowing the spread of the virus. Masks are required indoors in public spaces, and dining at restaurants after 6 p.m. is banned. The government has ordered gyms, movie theaters and swimming pools to close once again. About 40 percent of government workers have been asked to stay home.

Chuang Shuk-kwan, a top health official, did not rule out the possibility of imposing a curfew or a lockdown if the number of cases grew exponentially. “Of course, we hope the situation wouldn’t reach that stage,” Dr. Chuang said at a news conference on Monday.

The government is expanding its testing of residents, especially of those considered to be at a high risk of contracting the virus, including older adults, taxi drivers and restaurant workers. Officials say they are processing about 10,000 tests a day, and health workers have distributed testing kits in residential compounds where clusters have emerged.

Medical workers say they worry that an influx of coronavirus patients could overwhelm the city’s crowded hospitals. Health officials said on Monday that 71 percent of the 1,700 beds in isolation wards in the city’s hospitals were already in use. Most coronavirus patients, however, are in stable condition, with only 36 considered to be seriously or critically ill. A dozen people have died from the virus during the pandemic.

Adding to the strain, many isolation wards in Hong Kong are crowded with young patients who show no symptoms of the virus but are required to stay until they test negative. Doctors worry this could lead to a lack of space for older patients or those with more severe symptoms who need urgent medical attention.

Mrs. Lam, Hong Kong’s leader, said Sunday that the authorities were planning to use some 300 beds at a resort to isolate patients with mild symptoms. The government has said it would build a large quarantine center by the end of the year to accommodate 2,000 people, which could help ease overcrowding if cases rise again later in the year when the temperature drops.

As hospitals move swiftly to convert facilities to treat only people with the coronavirus, a further surge in such cases could leave patients with other conditions suffering, experts said.

Arisina Ma, the president of the Hong Kong Public Doctors Association, said some patients with other conditions have waited months for procedures and might not be able to seek treatment if coronavirus cases continue to rise.

“We have quarantine facilities, but the stress on our hospital services is still tremendous,” she said. “It seems our health care system has been paralyzed by Covid.”