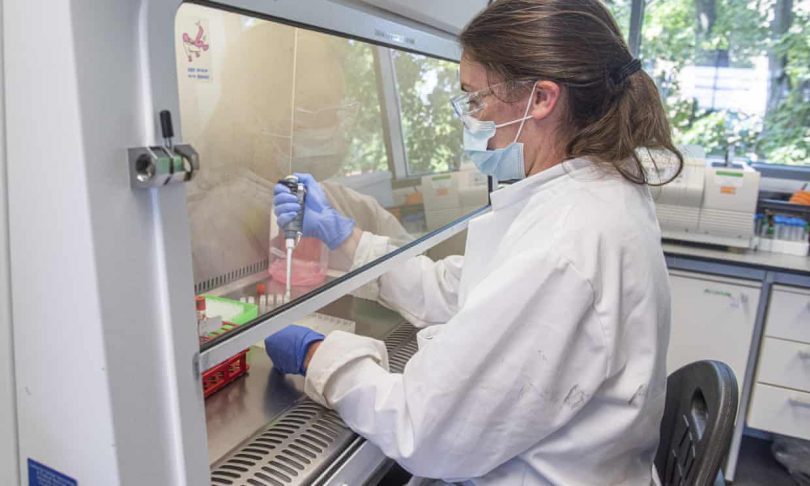 Hopes for a vaccine to address the global spread of coronavirus have been raised after Oxford University’s experimental version was revealed to be safe and to generate a strong immune response in the people who volunteered to help trial it.

After intensive research, Prof Sarah Gilbert, from Oxford’s Jenner Institute, said they were more than happy with the first results, which showed good immunity after a single dose of vaccine.

“We’re really pleased that it seems to be behaving just as we thought it would do. We have quite a lot of experience of using this technology to make other vaccines, so we knew what we expected to see, and that’s what we have seen,” she told the Guardian.

The prime minister, Boris Johnson, called the results “very positive news”, adding: “There are no guarantees, we’re not there yet and further trials will be necessary – but this is an important step in the right direction.”

The health secretary, Matt Hancock, said: “Very encouraging news. We have already ordered 100 million doses of this vaccine, should it succeed.”

Gilbert and her colleagues, who once said they could have a vaccine by September, will not predict when it might be available. “None of us have a crystal ball,” she said. The lockdown that began in the UK in late March drastically cut the amount of coronavirus in circulation, which saved lives but also made it difficult to trial vaccines.

The results published on Monday of a study involving more than 1,000 healthy volunteers – half of which had the vaccine while the other half were given a meningitis vaccine – in the Lancet medical journal are preliminary. The effect of the vaccine was measured by the amount of antibodies and T-cells it generates in the blood of the volunteers – not in any response to the virus itself.

Large-scale trials have begun in Brazil and South Africa, however, where infection rates are still high and it will be possible to assess whether vaccinated individuals are less likely to get Covid-19 than others.

The results were “a really important milestone” on the path to a vaccine, said the study’s lead author, Prof Andrew Pollard. They showed the vaccine was very well tolerated, he added. “We are seeing exactly the sort of immune responses we were hoping for, including neutralising antibodies and T-cell responses, which, at least from what we’ve seen in the animal studies, seem to be those that are associated with protection.”

The problem is, he said: “We just don’t know what level is needed if you meet this virus in the wild, to provide protection, so we need to do the clinical trials and to work that out.”

Hopefully researchers would find out from the trials to come, added Pollard, which would help all vaccine developers.

“We don’t know what high is. We’ve got immune responses that we can measure, we can see the virus being neutralised when the antibodies are tested in the laboratory, but we don’t know how much is needed. I mean it’s encouraging but it’s only the first milestone on this long path,” he said.

Ideally the vaccine would protect against any infection, but scientists already accept it may reduce the severity of the disease instead, meaning people would be less likely to become very sick and die.

The volunteers have been followed up for eight weeks so far after immunisation. A further question is how long any immune response will last – if for only six months or a year, people might need regular booster shots.

Gilbert said the work so far suggested that would not be a problem. The vaccine is delivered through an inactivated chimp adenovirus, similar to one that causes the common cold in humans. There have been concerns that the immune system might recognise and reject the adenovirus in people given booster jabs.

“We actually show in the paper that there are some antibodies that develop against the vaccine vector itself – against the adenovirus – it doesn’t stop the vaccine from boosting,” she said.

There are also big questions over whether it will work in older adults – flu vaccinations do not give as much protection to older people, whose immune systems function less well than younger people’s. The trial participants were between 18 and 55 years old. The risk of dying from Covid-19 rises dramatically with age from about 65. Safety trials have already begun in two groups of older adults, said Gilbert – one group aged 56 to 69 and the other over-70s.

Pollard said the vaccine was designed to stimulate both parts of the immune system.

“The immune system has two ways of finding and attacking pathogens – antibody and T-cell responses. This vaccine is intended to induce both, so it can attack the virus when it’s circulating in the body, as well as attacking infected cells,” said Pollard.

“We hope this means the immune system will remember the virus, so that our vaccine will protect people for an extended period. However, we need more research before we can confirm the vaccine effectively protects against Sars-CoV-2 infection, and for how long any protection lasts.”

Others scientists gave a cautious welcome to the published study – and to a second paper published in the Lancet which showed trials in Wuhan of a vaccine developed in China on a similar basis, using a human adenovirus vector, showed it was also safe and generated an immune response.

Alex Harris, the head of global policy and advocacy at the research charity Wellcome Trust, said the Oxford result was “just one crucial step but it’s very encouraging, and builds on the incredible global research effort during this crisis. To see promising results from several candidates in months is remarkable, but we must also be prepared for some candidates to fail in the later stages and be realistic about timeframes for manufacturing and rollout.”