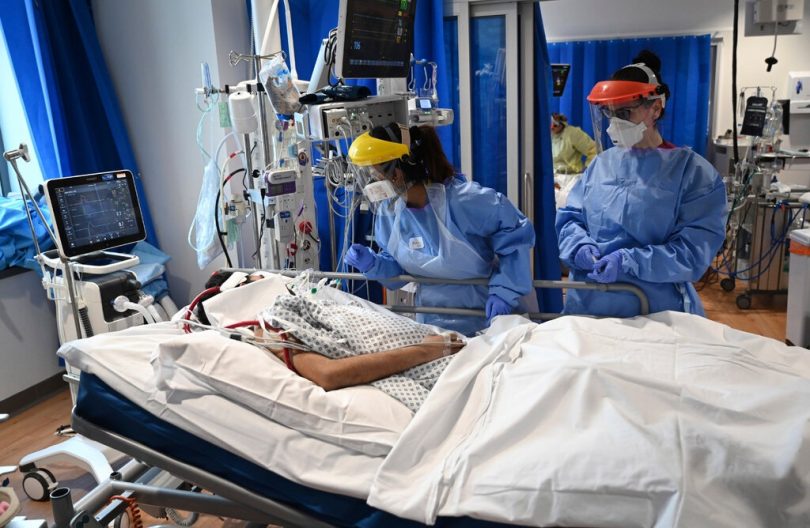 A small study of an inhaled form of a commonly available drug, interferon beta, suggests it could reduce the odds of patients becoming severely ill.

LONDON — A British drug company said Monday that an inhaled form of a commonly used medicine could slash the odds of Covid-19 patients becoming severely ill, a sliver of good news in the race to find treatments that was met by scientists with equal measures of caution and cheer.

The drug, based on interferon beta, a protein naturally produced by the body to orchestrate its response to viruses, has become the focus of intensifying efforts in Britain, China and the United States to treat Covid-19 patients.

Scientists have found that the coronavirus attacks the body in part by blocking its natural interferon response, disarming cells that would otherwise be alerting neighboring cells to activate their own genes and fortify themselves against the invading virus. In theory, administering interferon to patients could invigorate its defenses in the early stages of illness.

But giving patients interferon without eliciting serious side effects has proved challenging. The symptoms of a seasonal flu, for example, are largely produced by the mobilization of the body’s interferon response, scientists said.

The British drug company, Synairgen, tried to circumvent that problem by developing an inhaled form of interferon that directly targets cells in the lungs, rather than an injection, which can produce more intense side effects. It conducted a small, double-blind trial on patients hospitalized with Covid-19, the illness caused by the coronavirus, in nine British hospitals.

The initial results, announced in a brief news release but not yet peer reviewed or published, were promising: The inhaled form of interferon beta tested by Synairgen was shown to reduce the odds of hospitalized patients becoming severely ill — needing ventilation, for example — by 79 percent compared with patients who received a placebo.

But the significance of the findings was seriously limited — and, in the view of some scientists, undercut — by the small size of the trial. It involved only 101 patients, Synairgen said, making it difficult to know for certain how beneficial the drug was or how it affected patients differently. The study could not rule out that the drug was only marginally effective.

The company also fell short of the number of patients it originally said in a filing on a U.S. government website that it intended to enroll. That raised concerns among scientists that the company had analyzed the results earlier than it should have, once the treatment appeared to be effective. They said a much larger randomized trial was needed before they could assess the drug.

Scientists also noted that while injectable interferon has historically been used to treat hepatitis infections, the inhaled form of treatment was not yet licensed or widely available.

Still, amid a crisis caused by a disease with no known cure, the results were tantalizing. If the finding is borne out, it may represent one of the most significant breakthroughs to date in treating Covid-19 patients, virologists said.

“If there is the material to distribute it to the population, and you could keep the price down, this could absolutely be a game changer,” said Benjamin tenOever, a professor of microbiology at the Icahn School of Medicine at Mount Sinai in New York. “I don’t doubt it will work. I just don’t know how feasible it is.”

Professor tenOever was a co-author of a study in May in Cell, a scientific journal, about how the virus blocks the body’s interferon response. He said evidence was piling up that administering interferon could help limit the replication of the virus, especially in the early stages of illness, fending the virus off for long enough that a second set of genes could successfully eradicate it.

In hamsters, Professor tenOever said, there were signs that interferon cleared the virus and blocked onward transmission.

In China, the early results of a study among medical workers also showed promise, concluding that interferon nasal drops “may effectively prevent Covid-19 in medical staff.” The study found that the drops “have potential promise for protecting susceptible healthy people during the coronavirus pandemic.”

Among the most pressing challenges for British and American researchers studying interferon is the difficulty in recruiting patients in places where caseloads have fallen. Professor tenOever said one clinical trial planned at Mount Sinai had to be scuppered after coronavirus beds emptied out.

Synairgen, whose share price soared after it announced the results on Monday, is now struggling to recruit Covid-19 patients who are at home.

Stuart Neil, a professor of virology at King’s College London, said there had been fears early in the pandemic that giving interferon to patients could worsen the over-aggressive immune response that was itself sickening some of them. But more recent findings have indicated that, in fact, infected patients mount a limited interferon response on their own. That insight has laid the groundwork for studies like Synairgen’s.

“It’s very exciting,” Professor Neil said. “By basically inhaling the interferon into the site of infection, it looks like you’re taking the edge off the virus.”

But the sparsely detailed news release announcing the findings left many questions unanswered. Among other concerns, scientists noted that the company was mostly reporting outcomes over the course of a two-week treatment period only. They warned that things could change later.

Synairgen, founded by researchers at the University of Southampton in southern England, said that as a listed company, it was obligated by stock market rules to report the early results of its trial.

The company said that it had originally developed the inhaled form of interferon for patients who are especially susceptible to seasonal colds and the flu, among them people with asthma and with chronic obstructive pulmonary disease.

“We have recognized that as a broad spectrum antiviral, it could always have a place if an unwanted, highly pathogenic virus emerged,” Richard Marsden, the chief executive of Synairgen, told reporters on Monday. He said the company would work with regulators to make progress on the development of the drug as quickly as possible.

Scientists believe the interferon drug will work most effectively on patients who are not yet seriously ill. By contrast, another drug, dexamethasone, has been shown to help more severely ill patients.

Dexamethasone is already being used at American and British hospitals to treat coronavirus patients, doctors have said, and the World Health Organization called for accelerating production to ensure an adequate supply.

But the initial reports by scientists of the benefits of dexamethasone also showed the hazards of conducting science by news release. When the full study about dexamethasone was posted online — after doctors had already begun prescribing it — it reported that while the drug seems to help patients in dire condition, it might be risky for patients with milder illness.