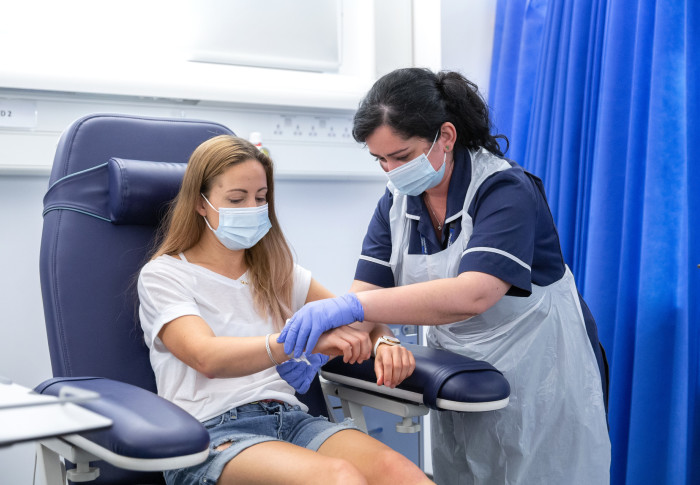 From next week, the ground-breaking vaccine, which has received more than £40m in Government funding in addition to £5m in philanthropic donations, will be trialled in six additional centres.

Preclinical studies have shown that the vaccine produced highly specific antibodies against SARS-CoV-2 in mice, which were able to neutralise the virus.

The participants at these trial sites will be aged 18-75, and receive two immunisations, four weeks apart.

The Imperial vaccine, which uses self-amplifying RNA (saRNA) technology, has so far been trialled in 92 volunteers.

All participants are being closely monitored by clinical teams. In addition to recording any potential adverse reactions to the vaccine, the team will analyse participants’ blood for the presence of neutralising antibodies against the SARS-CoV-2 virus.

The Imperial vaccine is based on a new approach that uses synthetic strands of genetic code (called RNA), based on the virus’s genetic material.

Once injected into muscle, the RNA self amplifies – generating copies of itself – and instructs the body’s own cells to make copies of a spiky protein found on the outside of the virus. This should train the immune system to respond to the coronavirus so the body can easily recognise it and defend itself against COVID-19 in future.

If the trials succeed, the Imperial vaccine may be uniquely able to deliver effective doses from relatively low volumes of the vaccine, and lends itself to rapid scale-up in manufacturing at a relatively low cost.

Dr Katrina Pollock, clinical lead on the Imperial COVAC1 study, said: “The trial is progressing well, and the additional sites will allow us to further evaluate the safety and immunogenicity of this vaccine, providing key clinical data. We look forward to the expansion of the trial with our partners at additional sites.”

Professor Robin Shattock, who is leading the development of Imperial’s COVID-19 vaccine, said: “The early results from pre-clinical data have been promising, and the expansion of our trial to additional centres will provide further data on the safety of the vaccine, and the immune response.”

Business Secretary Alok Sharma said: “I’m immensely proud of how quickly our scientists and researchers have come together in the search for a coronavirus vaccine.

“The Government is throwing its full weight behind Imperial’s exciting work with over £40million of investment. While there’s still more work to do towards finding a safe and effective vaccine, I’m confident our best minds will rise to the challenge.”

Kate Bingham, Chair of the Vaccines Taskforce, said: “The self-amplifying RNA platform is a powerful one and could play a central role in long-term pandemic preparedness.”

As part of the vaccine development, Imperial has formed a new social enterprise VacEquity Global Health (VGH), in partnership with Morningside Ventures, to rapidly develop vaccines and distribute them as widely as possible in the UK and overseas, including to low- and middle-income countries.