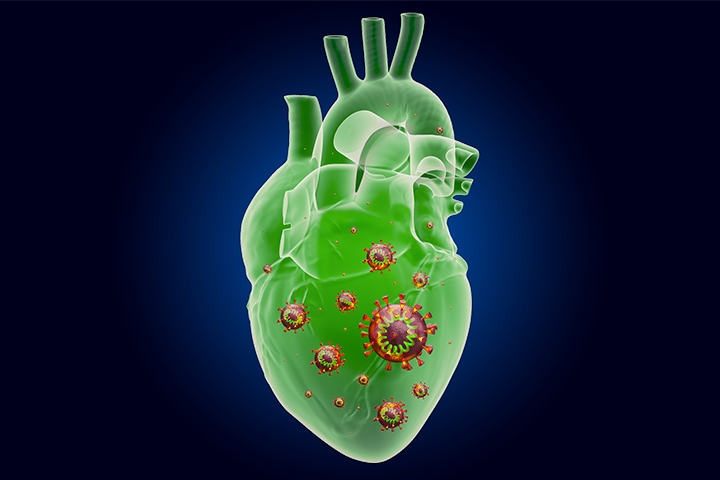 The extent of direct cardiac involvement in COVID-19 could be concerning for long-lasting complications from SARS-CoV-2 infection, two German studies showed.

Autopsy of consecutive COVID-19 cases without known myocarditis frequently turned up viral infection of the heart, but without an influx of inflammatory cells. The other study found that many patients who recovered from COVID-19 still had abnormal cardiac MRI findings consistent with active inflammation at a median 71 days after viral diagnosis. Both papers were published online in JAMA Cardiology.

“[I]f this high rate of risk is confirmed, the pathologic basis for progressive left ventricular dysfunction is validated, and especially if longitudinal assessment reveals new-onset heart failure in the recovery phase of COVID-19, then the crisis of COVID-19 will not abate but will instead shift to a new de novo incidence of heart failure and other chronic cardiovascular complications,” according to an accompanying editorial.

“We wish not to generate additional anxiety but rather to incite other investigators to carefully examine existing and prospectively collect new data in other populations to confirm or refute these findings,” wrote editorialists Clyde Yancy, MD, MSc, of Northwestern University in Chicago, and Gregg Fonarow, MD, of UCLA.

The study of survivors prospectively found lingering myocardial inflammation and other cardiac abnormalities on MRI in 78 out of 100 people:

Cardiac inflammatory involvement in this group with “a relative paucity of preexisting cardiovascular condition and with mostly home-based recovery” was similar to the hospitalized subgroup with regards to severity and extent, reported Eike Nagel, MD, of University Hospital Frankfurt, Germany, and colleagues.

“Although the long-term health effects of these findings cannot yet be determined, several of the abnormalities described have been previously related to worse outcome in inflammatory cardiomyopathies,” according to them.

At the time of cardiac MRI, high-sensitivity troponin T (hsTnT) was detectable in 71% of people and significantly elevated (13.9 pg/mL or greater) in 5%.

Active lymphocytic inflammation (with no evidence of any viral genome) was found in three patients with severe abnormalities (significantly higher hsTnT, native T1, and native T2 measures in the upper tertile, LGE, and left ventricular ejection fraction less than 50%) referred to endomyocardial biopsy.

The measures with the best discriminatory ability to detect COVID-19-related myocardial pathology were Native T1 (representing diffuse myocardial fibrosis and/or edema) and Native T2 (specific for edema) — both indicative of “active inflammatory process,” according to Nagel’s team.

Investigators cautioned that their study may not be applicable to younger patients, people in the acute phase of COVID-19 infection, or asymptomatic COVID-19 patients.

“Unlike these previous studies, our findings reveal that significant cardiac involvement occurs independently of the severity of original presentation and persists beyond the period of acute presentation, with no significant trend toward reduction of imaging or serological findings during the recovery period,” they said.

“When added to the postmortem pathological findings … we see the plot thickening and we are inclined to raise a new and very evident concern that cardiomyopathy and heart failure related to COVID-19 may potentially evolve as the natural history of this infection becomes clearer,” according to Yancy and Fonarow.

In 39 consecutive autopsy cases in Germany without clinically fulminant myocarditis, 24 had cardiac tissue test positive for SARS-CoV-2. Viral load above 1,000 copies per μg RNA was documented in 16 cases.

Patients with high viral load had increased cytokine gene expression compared with 15 patients without any SARS-CoV-2 in the heart, “in line with findings that the cytokine-induced organ dysfunction contributes to the disease process,” according to Dirk Westermann, MD, of University Heart and Vascular Centre Hamburg, Germany, and colleagues.

“Importantly, virus presence was not associated with increased infiltration of mononuclear cells into the myocardium compared with the virus negative group. According to the Dallas criteria, no myocarditis was present because no massive cell infiltrates or necrosis could be documented,” study authors noted.

“Overt fulminant myocarditis has been reported in isolated patients with SARS-CoV-2 infection. However, the current data indicate that the presence of SARS-CoV-2 in cardiac tissue does not necessarily cause an inflammatory reaction consistent with clinical myocarditis,” Westermann’s group concluded.

Based on their data, SARS-CoV-2 is most likely localized not in the cardiomyocytes but in interstitial cells or macrophages invading the myocardial tissue, the authors added.

“These new findings provide intriguing evidence that COVID-19 is associated with at least some component of myocardial injury, perhaps as the result of direct viral infection of the heart,” Yancy and Fonarow commented.

Autopsy cases included in the study were performed April 8 through 18 at Westermann’s institution. Patients were those who tested positive for SARS-CoV-2 post mortem (median age 85 years, 59.0% women). Pneumonia was listed as the cause of death in 35 out of the 39 individuals.

The elderly age of the patients may have influenced the study’s findings, the investigators acknowledged. Moreover, their autopsy study was equipped with limited clinical information.

“Unfortunately, endomyocardial biopsies of patients with COVID-19 are not available in significant numbers at the moment and will likely not be available in higher numbers to address this in the near future owing to the emerging health care crisis due to COVID19,” Westermann and colleagues said.

“Whether myocardial viral activity in the absence of clinical evidence of myocarditis might result in long-term consequences is unknown. Leukocytopenia is another feature of COVID-19, which might hamper myocardial invasion of mononuclear cells,” according to them.