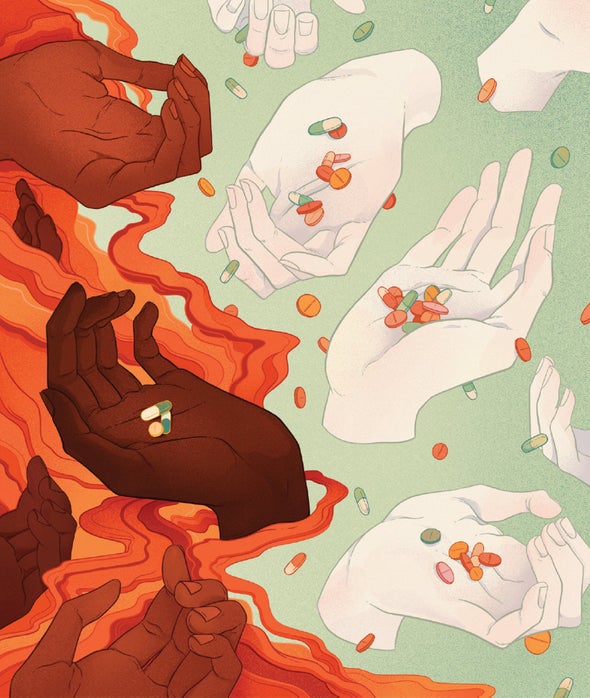 The pandemic exposed a glaring health gap caused by systemic racism. Here’s how to narrow it

The U.S. has been roiled this year by two crises that seem on the surface to be unrelated: the coronavirus pandemic and law-enforcement killings of black Americans—the latter leading to mass protests and police violence toward protesters. Although the immediate causes of these two tragedies seem distinct, both have their roots in structural racism. The virus has killed a disproportionate number of black people (as well as other people of color), and black people are by some estimates 2.5 times more likely than white people to be killed by the police. Support is building for police reform, and we can take concrete steps immediately to protect the health of black Americans.

Deep health inequities have always existed in the U.S., but the pandemic has shone an especially harsh light on them. A report from the Centers for Disease Control and Prevention on a sample of 580 people hospitalized with confirmed cases of COVID-19 found that 33 percent of patients were black in a population sample where just 18 percent of the people were black. White people made up 59 percent of the same population, but only 45 percent were infected. Through April 16 in New York City, the death rate among blacks was 92 per 100,000 people and among Latinx people 74 per 100,000—whereas the numbers for white people and Asian people were 45 and 35 per 100,000, respectively. These trends are not limited to New York: the coronavirus has infected and killed an outsize number of black people across the U.S.

Many people of color work in so-called essential industries such as nursing or home health care, grocery stores and mass transit, where they are more likely to come into close contact with people who are sick. To make matters worse, these jobs are often poorly paid, and a large proportion of such workers lack health or life insurance. In addition, many black, Latinx and indigenous communities have high rates of underlying health conditions, including diabetes, hypertension and heart disease, which are known risk factors for severe illness and death from COVID-19. These disparities can be traced back largely to the racism and redlining that have resulted in poor, overcrowded housing and exposed people of color to more severe levels of air pollution—factors that exacerbate all these health problems. The Families First Coronavirus Response Act and the Coronavirus Aid, Relief, and Economic Security (CARES) Act, both of which Congress passed in March, did very little to protect the health of essential workers, according to policy experts across the political spectrum, because they focused more on providing economic relief than medical care or benefits.

Tackling these health inequalities fully will require major reforms in our health insurance system and a true effort to address deep-seated racial and economic injustices. Some possible short-term solutions are out there: the nonpartisan Brookings Institution published a report in March that called for enrolling all uninsured frontline essential workers and their families in a new “Medicare COVID” program that would cover all testing, treatment and vaccinations related to COVID-19. (The CARES Act mandates that insurance providers cover COVID-19 testing but not treatment.)

A proposal from the progressive advocacy group Center for American Progress (CAP) asks for hazard pay for essential workers and paid medical or family leave for workers to care for themselves or a sick family member (the Families First legislation included a provision for two weeks’ paid sick leave but was full of exemptions, mostly for large businesses and health care providers). CAP also called for Congress to ensure coverage for COVID-19 testing and treatments, regardless of immigration status. The House recently passed a $3-trillion bill that would include many of these provisions, but the legislation appears doomed in the Senate.

We should adopt these measures as a stopgap. But in the long term, we need to expand access to affordable health care for all Americans, and it should not be tied to employment. The Affordable Care Act (ACA) has made great strides toward this end and has proved popular with most Americans, despite Republican efforts to dismantle it. At minimum, we need to reopen ACA enrollment in every state and provide incentives for all states to expand Medicaid, which insures about 75 million low-income Americans.

Too many people of color lack access to even the most basic health care, and others risk losing coverage for themselves and their families if they lose their jobs. The next time there is a pandemic—and there will be a next time—we cannot allow the same appalling racial disparities to determine who lives and who dies.