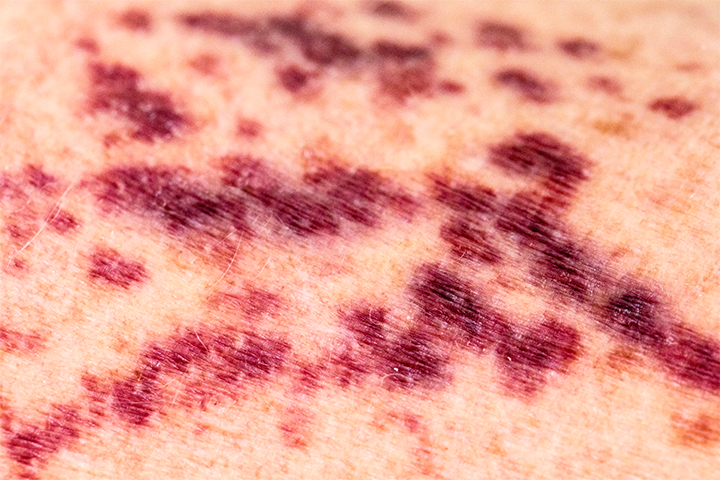 — Certain skin manifestations tied to coagulopathy in the sickest patients

Certain types of rashes in severe COVID-19 patients may be “a clinical clue” to an underlying thrombotic state, researchers said.

All had been on prophylactic anticoagulation since admission and developed those “hallmark manifestations of cutaneous thrombosis” despite escalation to therapeutic dose anticoagulation for the suspected pulmonary embolism before the rash was noted.

“Clinicians caring for patients with COVID-19 should be aware of livedoid and purpuric rashes as potential manifestations of an underlying hypercoagulable state,” Harp’s group wrote. Skin biopsy in each case showed pauci-inflammatory thrombogenic vasculopathy.

Biopsy could help guide anticoagulation management, they suggested. These rashes could prompt consultation with hematology staff and escalation of anticoagulation even without documented or suspected thrombotic events, the group added.

They cited earlier research out of Spain involving 375 patients, where skin findings included livedoid and necrotic eruptions in patients with more severe disease, and suggested these may be “associated with occlusive vascular disease.”

The four patients in the current study had laboratory-confirmed COVID-19 and acute respiratory distress syndrome that required intubation. They also had skin findings of acral fixed livedo racemosa and retiform purpura.

Patients ranged in age from 40-80, with the reported rash occurring 19 to 23 days after their first symptom. Three of four patients had a finding of arterial thrombosis, one of whom also developed venous thrombosis. Two patients died, while two were still in the ICU at the end of the study.

Harp and colleagues also noted implications for therapeutic anticoagulation for these patients, all of whom had anticoagulation escalation due to presumed pulmonary embolism and elevated D-dimer level.

Notably, according to the report, patients’ features “were not consistent with conditions predisposing to thrombosis, including typical disseminated intravascular coagulation or thrombotic microangiopathy, given the normal or increased fibrinogen level, normal haptoglobin level, lack of persistent severe thrombocytopenia, and absence of schistocytes on results of peripheral bloodsmear testing.”

Limitations to the data include an inability to confirm the timing of rash onset, as well as lack of imaging for pulmonary emboli.