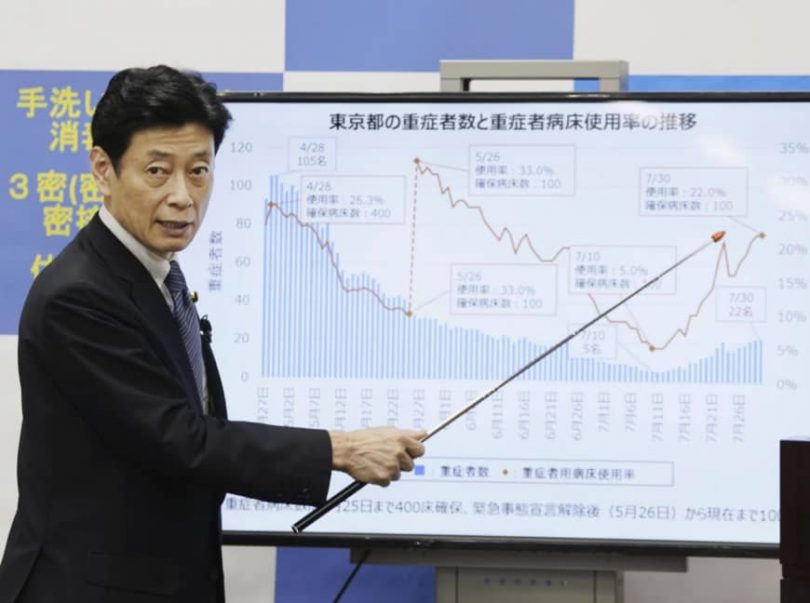 Economic revitalization minister Yasutoshi Nishimura, in charge of the government’s response to the coronavirus epidemic, has marked the 100th straight day of holding press briefings on the matter.

While Nishimura reached the milestone on Tuesday, some critics view him as seeking to attract attention as he is apparently eager to become the ruling Liberal Democratic Party’s leader in the future.

“Every day, I’m facing a press conference, with the aim of giving better explanations than a day before,” Nishimura said at his 100th daily press briefing.

“It is my current duty to meet with the press in good faith,” the minister said. “I will continue to provide accurate information until the day when people can feel safe.”

In March, Nishimura assumed the role of answering parliamentary questions about a law revision for the fight against the novel coronavirus. After the law revision was enacted, he took charge of implementing the revised law.

Nishimura temporarily stayed home after a Cabinet Secretariat official tested positive for the coronavirus. But since April 27, he has continued to speak to reporters on a daily basis, including during inspection visits.

Nishimura has been holding press briefings even on weekends and public holidays. “His physical and mental toughness deserves credit,” a government source said.

Meanwhile, Prime Minister Shinzo Abe has held no formal news conference for more than a month.

Nishimura’s unusually frequent press exposure seems to be partly related to his political ambitions. He ran in an LDP leadership election in 2009, when the party was out of power.

“My experience of tackling the coronavirus crisis must be applied to the future,” Nishimura has said.

Through his press conferences, however, Nishimura has caused some confusion which resulted from his lack of prior coordination within the government.

In June, he announced a plan to “scrap,” instead of reorganize, a panel of experts on the coronavirus, provoking a backlash from some related experts and ruling party lawmakers.

More recently, Nishimura has called on people to be cautious about visiting their parents’ homes during the Bon summer holidays in the country, making a contrast with Suga, who is promoting the government’s Go To Travel campaign to shore up the tourism industry battered by the epidemic.

“He has quick reflexes but tends to be influenced by the situation,” a senior administration official said of Nishimura.

“He likes to attract attention too much,” said a member of an LDP faction that Nishimura belongs to.