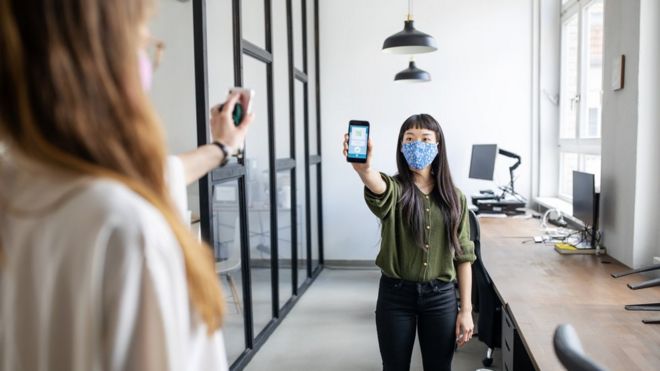 A second attempt at a Covid-19 contact-tracing app for England will soon be tested by members of the public.

Officials hope to confirm the date for the limited roll-out within a few days. It could be as soon as next week.

The app will let people scan barcode-like QR codes to log venue visits, as well as implementing Apple and Google’s method of detecting other smartphones.

But efforts are still ongoing to deliver medical test results within the product.

Users will get alerts if others they have recently been close to declare that they have been diagnosed with the coronavirus.

The software will provide information about the prevalence of the disease in the local area to encourage people to be more cautious if levels rise.

The Times has reported that users could also be given a rough count of how many times a day they have been within 2m (6.6ft) of any other person with the app installed, for more than 15 minutes. This could help people spot instances where they could have taken more care and help change their behaviour.

But it appears that Baroness Harding and others in charge of the NHS Test and Trace team still do not believe enough progress has been made to rely on Bluetooth signals to direct users to self-isolate for a fortnight.

That contrasts with their counterparts in Northern Ireland. They launched the StopCOVID NI app last week, which is built round the same Apple-Google framework.

It does tell users to go into quarantine for 14 days if it determines there is a good chance they have been exposed to the virus.

The BBC has been told that officials are considering using the Isle of Wight again to test the English app, and this time other areas could also be involved.

However, no formal decision has been made as yet.

One technologist said she was concerned the app was being pushed out in an unfinished state to stop further questions being asked about the absence of a contact-tracing app in England at a time local lockdowns are coming into force.

“The fact that the software works on the phone doesn’t mean it’s going to create the change that is needed in a community,” added Rachel Coldicutt.

“We’re only going to know it’s effective if it produces timely changes in people’s behaviour.”

The government has published limited details about what the new app will do on its website.

It says it will:

It adds that both the Bluetooth and QR code systems are decentralised.

This means that checks to see whether a user has been close to a person later diagnosed as having the virus, or been to one of the flagged venues, happen on their device. As a consequence, officials cannot identify them unless they make contact themselves, which they might do to order a test or warn others.

It remains unclear how long it will be until the app is rolled out nationwide in England.

“The real power of the app will come with mass adoption,” the document acknowledges, adding that businesses and public services will be asked to help encourage its use when it is ready.