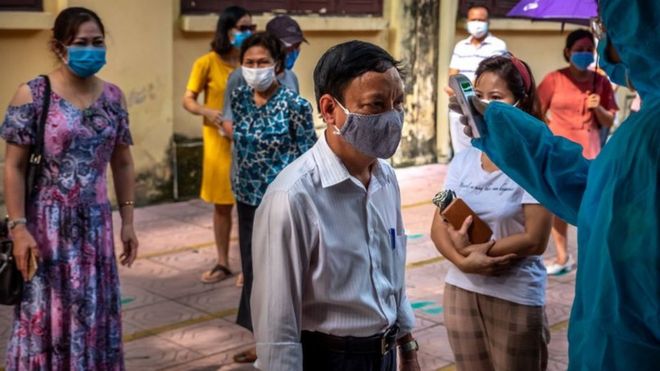 In mid-July, Vietnam still shone as a Covid-19 outlier. No reported deaths, and months without a locally transmitted case.

Fans packed into football stadiums, schools had reopened, and customers returned to their favourite cafes.

“We were already back to normal life,” said Mai Xuan Tu, a 27-year-old from Da Nang in central Vietnam.

Like many in the coastal city wildly popular with domestic visitors, she works in the tourism industry and was slowly resuming bookings for the tour company she founded.

But by the end of July, Da Nang was the epicentre of a new coronavirus outbreak, the source of which has stumped scientists. Cases suddenly surged after 99 straight days with no local transmissions.

Last week the city saw the country’s first Covid-19 death, a toll that has since risen to 10.

The communist country acted fast and decisively where other nations faltered, closing its borders to almost all travellers except returning citizens as early as March.

It quarantined and tested anyone who entered the country in government facilities, and conducted widespread contact-tracing and testing nationwide.

So what went wrong?

“I’m not sure anything went wrong,” says Prof Michael Toole, an epidemiologist and principal research fellow at the Burnet Institute in Melbourne.

Most countries that thought they had the pandemic under control have seen resurgences, he says, pointing to a long list including Spain, Australia and Hong Kong.

“Like in the first wave, Vietnam has responded quickly and forcefully.”

Around 80,000 visitors in Danang – many of whom had relaxed into thinking the disease was contained – were flown home promptly after the new cases emerged, as the historic port city sealed itself off from visitors and retreated into full lockdown.

Vietnam’s spike shows that “once there’s a little crack and the virus gets in it can just spread so quickly,” Prof Toole says.

Scientists and researchers across the country are racing to find out exactly how it did.

His team works with the government on its infectious diseases programmes and some of them focus on what he calls “genetic detective work” – the sequencing of viruses that can help illuminate “the chains of transmission. Who or where the virus came from”.

But so far no-one knows how the first new case in Da Nang – a 57-year-old man known as patient 416 – came into contact with the coronavirus.

The knowledge gap has allowed some speculation to set in.

Local media have carried reports suggesting the latest outbreak may have been caused by a more virulent strain of the virus. Others have pointed to recent people-smuggling cases along the Vietnam-China border.

But there is no evidence to suggest a more deadly strain or that migrants have brought the virus into the country.

A more likely possibility, say researchers, is that the virus went undetected during the months where there were no reported cases, potentially being asymptomatically transmitted in the community. Or there could have been an error somewhere along the quarantine process with someone released prematurely.

“There’s evidence [the virus] was circulating in Da Nang for several weeks before that first case was diagnosed,” says Dr Justin Beardsley, a senior lecturer in infectious diseases at the University of Sydney whose research has focused on Vietnam.

There could be some element of people dropping their guard, he adds, while noting that Vietnam showed exceptionally strong community engagement when it came to curbing spread of the virus.

“There was big national pride about controlling the pandemic. And I think that’s been missing in some Western countries.”

Since hovering around the 400 mark in late July, the number of confirmed coronavirus cases in Vietnam has surged above 780. The deputy health minister has said they expect numbers to rise and forecast on Wednesday that the epidemic will reach a peak in 10 days.