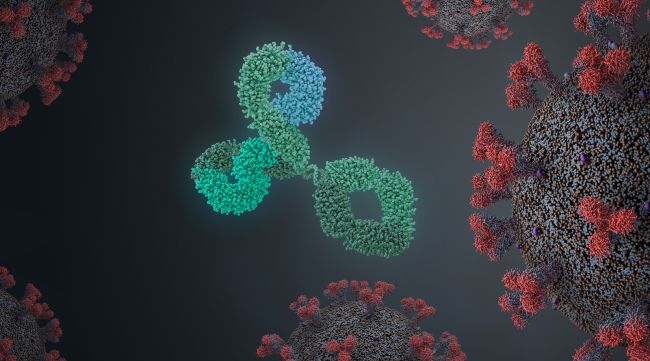 While the world is transfixed by the high-stakes race to develop a COVID-19 vaccine, an equally crucial competition is heating up to produce targeted antibodies that could provide an instant immune boost against the virus. Clinical trials of these monoclonal antibodies, which may both prevent and treat the disease, are already underway and could produce signs of efficacy in the next few months, perhaps ahead of vaccine trials. “If you were going to put your money down, you would bet that you get the answer with the monoclonal before you get the answer with a vaccine,” says Anthony Fauci, head of the National Institute of Allergy and Infectious Diseases (NIAID).

“Antibodies have the potential to be an important bridge until the vaccine is available,” says Ajay Nirula, a vice president at Eli Lilly, one of several large companies investing in them. Likely to be more effective than remdesivir and dexamethasone, the repurposed drugs shown to help against COVID-19, antibodies could protect the highest risk health care workers from becoming infected while also lessening the severity of the disease in hospitalized patients. But producing monoclonals involves using bioreactors to grow lines of B cells that make the proteins, raising concerns they could be scarce and expensive. On 15 July, Lilly, AbCellera, AstraZeneca, GlaxoSmithKline, Genentech, and Amgen jointly asked the U.S. Department of Justice (DOJ) whether they could share information about manufacturing their monoclonals without violating antitrust laws “to expand and expedite production.”

Soon after the pandemic began, researchers in industry and academia began to identify, design, tweak, and conduct lab tests of monoclonal antibodies against SARS-CoV-2, the virus that causes COVID-19. Most bind to and “neutralize” the viral surface protein, or spike, that initiates an infection. On 29 May, Lilly, working with AbCellera, launched the first human study of a monoclonal antibody—a phase I trial testing its safety and tolerability in hospitalized COVID-19 patients. Other safety trials followed, from Lilly’s Chinese partner Junshi Biosciences and Regeneron, which developed a cocktail of three monoclonals that works against Ebola.

Regeneron is now testing the efficacy of its COVID-19 cocktail, which combines a spike antibody from a person who recovered and one from a mouse given the spike protein, in three large-scale, placebo-controlled trials. A prevention trial run in coordination with NIAID’s COVID-19 Prevention Trials Network (CoVPN), an arm of the Trump administration’s Operation Warp Speed, will recruit 2000 people who live in a house with a confirmed COVID-19 case. One treatment study run by the company aims to enroll nearly 2600 hospitalized people with severe COVID-19, whereas another, about half that size, will test the antibodies in infected people with mild or moderate symptoms. Lilly has launched its own trials, including a phase III, placebo-controlled study in 2400 residents or staff of long-term care facilities, run with the help of CoVPN.

“We should be able to see an efficacy signal very quickly” from these trials, says Amy Jenkins, who heads the Pandemic Prevention Platform (P3) program at the Defense Advanced Research Projects Agency, which for 2 years has invested in speeding the development of monoclonal antibodies. Although Jenkins hesitates to make a firm prediction, she says the November-December time frame is “realistic and conservative.” That is likely earlier than any vaccine will prove safe and effective, researchers predict. “I would be reluctant to say [that] would be any earlier than the end of the year,” Fauci said at a press conference about the launch of NIAID’s first COVID-19 efficacy vaccine trial on 27 July.

Regeneron’s Christos Kyratsous notes that vaccine trials must wait a few weeks for a person’s immune system to develop appropriate responses to shots and further weeks for “the event”—a chance exposure to SARS-CoV-2. This means those trials require time and many people. In contrast, for the antibody treatment trials, “your event has already happened,” Kyratsous says. And in the prevention studies, the household contacts of COVID-19 cases will be much more likely to be exposed than people who typically join a vaccine efficacy study.

Immunologist Dennis Burton, whose group at Scripps Research has isolated highly potent monoclonal antibodies against SARS-CoV-2 that it hopes to move into human studies (Science, 15 June, DOI: 10.1126/science.abc8511), says he is optimistic that monoclonals will protect people from infection for months with a single shot. “It’s much easier to take care of a few incoming virus particles than to try and resolve or cure an ongoing infection.” The same logic holds for treatment. “Hit the virus hard and early,” Burton says.

Kyratsous says even if monoclonal antibodies don’t beat vaccines to the finish line, they still might have a role to play against COVID-19. “We’re going to need both approaches in the long run,” Kyratsous suggests. Vaccines are rarely 100% effective, and many people may decline a vaccine or skip immunization for other reasons. What’s more, he notes, the elderly or people who are immune compromised may not mount robust immune responses after being vaccinated.

Supplies of monoclonal antibodies may be limited, however, in part because of modest investment. Operation Warp Speed, for example, has committed $8 billion to six different COVID-19 vaccines; for monoclonals, the government has invested about $750 million, much of it in Regeneron, which will produce somewhere between 70,000 and 300,000 doses before it even has efficacy data. Lilly says it will have 100,000 doses by the end of the year.

But no one knows how far those doses would stretch, says Janet Woodcock, who is on leave from the Food and Drug Administration to lead Warp Speed’s therapeutic effort. If the antibodies work, a study from the Duke University Margolis Center for Health Policy estimates the United States alone could require nearly 40 million doses next year for prevention and treatment. “Unlike with vaccines, it is hard to project the number of treatment courses that will be available,” Woodcock says. Prevention, which would be a single intramuscular shot, requires less product than the intravenous infusions used in treatment, she notes, but the amount needed depends on a person’s weight.

Although how to prioritize vaccine distribution has already sparked extensive debate, no such discussion has yet taken place about monoclonal antibodies. But DOJ acknowledged the supply concerns on 23 July, giving the six companies that had petitioned it the green light to share production information.

Regeneron is not part of that group, yet Kyratsous is optimistic about meeting the need. “The good thing with some of these biologics is you can ramp up production fairly fast,” he says. Nirula agrees. “If we have success in these clinical trials, we will have a lot of drug available,” he says.

The cost of monoclonals, especially for the higher doses needed for treatment, could split the world into the haves and have-nots. “It’s unlikely that that treatment will get down to a price point in the near future that it would be easily affordable globally,” says Seth Berkley, who leads Gavi, the Vaccine Alliance, and heads an international COVID-19 vaccine effort.

Jenkins says a key aim of the P3 project, which has provided four groups with $96 million in seed money, has been to develop monoclonal antibodies that can be made by the body itself, instead of in large fermentation tanks. The idea, which has not yet been tested in humans for COVID-19, is to inject people with DNA or messenger RNA that encodes a desired antibody, allowing their own cells to make it. “We think we can bring down the cost of monoclonal antibodies,” Jenkins says.

Regardless of cost, evidence that monoclonals work as preventives could benefit everyone by giving vaccinemakers a clear sign that antibodies against the surface protein of SARS-CoV-2 are enough to protect a person. This, in turn, could provide a strong indicator for evaluating the worth of a candidate vaccine short of actual efficacy data. “It will be earthshaking to the vaccine field in a positive way,” says Myron Cohen of the University of North Carolina, Chapel Hill, who leads testing of monoclonal antibodies for CoVPN. “It provides a thousand opportunities to move forward faster.”