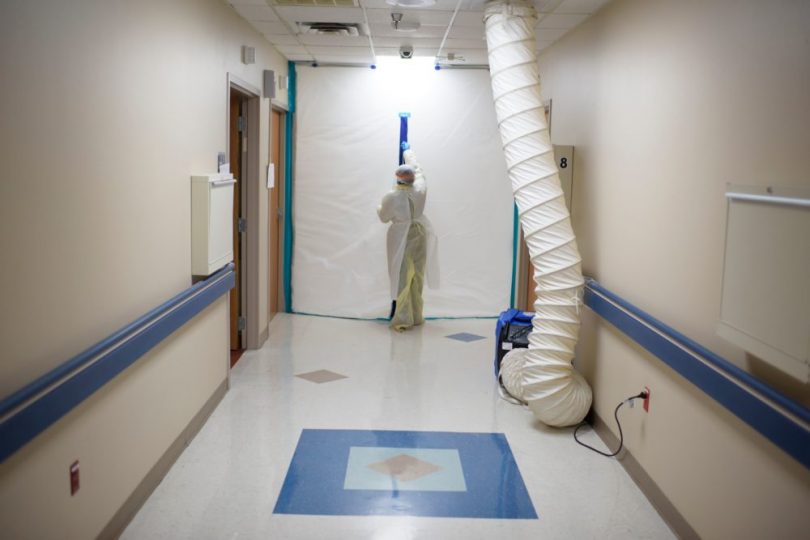 Last month, the administration abruptly informed hospitals that they were to stop submitting COVID-19 data to the CDC, and instead begin logging it with TeleTracking, a private firm based in Pittsburgh, rather than the CDC. The rapid change and lack of clear communication from the administration led to weeks of chaos, as TPM has reported.

But Birx this week told government officials and hospital executives in Arkansas that it was “solely an interim system,” the Journal reported.

“CDC is working with us right now to build a revolutionary new data system so it can be moved back to the CDC, and they can have that regular accountability with hospitals relevant to treatment and PPE,” Birx said, according to the Journal.

At least one Trump administration official denied the Journal’s reporting: Michael Caputo, the assistant secretary for public affairs at the Department of Health and Human Services, called it “false” on Twitter and said “the process for #COVID data reporting has not and is not changing.”

HHS made repeated attempts to explain to @RWhelanWSJ of @WSJ that the process for #COVID data reporting has not and is not changing. This false reporting will sow more confusion and only undermines the public health response. https://t.co/CRw46s8tXS

The CDC and HHS did not immediately reply to a request for comment. Samantha Gaspar, a spokesperson for TeleTracking, declined to answer questions and referred TPM to HHS.

The news took at least one state hospital association by surprise.

“I’m learning a lot in the last 30 seconds,” said Dave Dillon, a spokesperson for the Missouri Hospital Association, who first heard about the development on the phone with TPM. He noted the switch would be yet another change Missouri hospitals would have to accommodate. “We’ve managed to get all of our hospitals to participate in the push to TeleTracking.”

It’s not clear yet how the messy changeover and technological issues created by last month’s shift affected hospitals’ ability to handle the COVID-19 pandemic.

“Obviously, these data are important and any delays or inaccuracies present challenges for the COVID-19 response,” Jen Kates, senior vice president of the Kaiser Family Foundation, told TPM. “It’s unclear what actually happened with the changeovers in the database, but they appear to have taken up a lot of time and energy and hopefully did not detract from the response.”

Questions about whether TeleTracking had the capacity and ability to take on the job of recording hospitals’ COVID-19 data peppered the abrupt switch — announced last month — from the start. Besides highlighting that the company is well-versed in tracking patients’ progress through hospitals and the usage of hospital beds, TeleTracking offered little explanation as to why it was chosen by the federal government to handle such a massive influx of data.

Experts said they were unfamiliar with the company. “The biggest issue with this new data system is, they are not the gold standard with data,” Karen Hoffmann, former president of the Association for Professionals in Infection Control and Epidemiology (APIC), told TPM last month. “They have no history with infection preventionists, where the CDC is really considered the gold standard to be able to track and use their expertise and their technical support for collecting data.”

TeleTracking had never before had such a large government contract as the $10.2 million one they got to partner with the HHS and elbow the CDC out of the data-collection process. The HHS touted TeleTracking as a more “effective” alternative to the CDC’s National Healthcare Safety Network (NHSN), which had been tracking COVID-19 data since March. But it left unanswered questions about why a company with 1,000 hospitals in its client base and 300 employees would trump the CDC, with its years of practice recording the kind of information hospitals were submitting.

“This decision took some by surprise and raises a lot of questions going forward about how this private company is going to achieve that additional speed,” Kates told TPM when the switch was made.

TeleTracking, and the CDC before it, is collecting data such as hospital bed use, ICU capacity and patient flow. Whereas the CDC’s NHSN has a years-old track record with its survey tracking health-care associated infections, the TeleTracking survey was new and led to some confusion. In Missouri and elsewhere, for example, states lost out on days or weeks of hospitalization because the numbers coming through the TeleTracking survey were not yet reliable enough.

Recently, the TeleTracking contract raised more red flags when an attorney writing for the company informed Sens. Chuck Schumer (D-NY) and Patty Murray (D-WA) that the contract itself was covered by a non-disclosure agreement — something experts told TPM was extremely unusual.