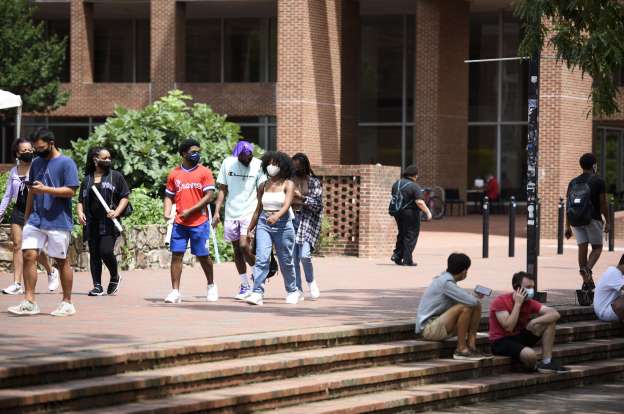 “This decision to move online for the fall semester was not taken lightly. After all, we achieve our mission—student and regional success—at much higher levels when we can operate in person, with the face-to-face environment providing engagement that we know is critical to our students,” Interim Chancellor Ron Mitchelson announced Sunday.

Mitchelson wrote that a “rapid acceleration” of coronavirus cases were discovered within the last week alone, a worrisome sign for other universities across the country as they continue welcoming students back to campus for in-person instruction.

ECU officials announced Saturday they had identified COVID-19 clusters—defined as five or more cases in close proximity—that had stemmed from five separate residence halls on campus and the Alpha Gamma Delta sorority.

While ECU administration anticipated coronavirus cases cropping up on campus, Mitchelson said that the university had seen a “greater spike” than expected.

ECU is the third school within the University of North Carolina system to move to online-only classes because of a spike in coronavirus cases on campus.

The North Carolina State University (NC State) administration announced Thursday that it would move all its undergraduate classes online for the remainder of the fall semester, citing an alarming increase in cases and students who were being placed in quarantine or isolation. Chancellor Randy Woodson cast the majority of blame on off-campus activities, like large house parties.

“This is a very disappointing thing for us,” Woodson said during a press briefing Thursday. “We worked hard, the faculty and the staff, all summer long, to get ready to reopen. We followed CDC guidelines, and we did everything we could to make campus safe. And the good news is that campus has been safe. But we’ve seen behaviors off campus that, frankly, are inconsistent with our community standards and have had an impact on our ability to go forward.”

The University of North Carolina at Chapel Hill (UNC-Chapel Hill) administration announced Monday it would move all undergraduate studies online after an alarming spike of COVID-19 cases was seen within just one week after the campus reopened.

UNC-Chapel Hill reported 135 new cases of the virus on Monday, and the university’s testing positivity rate jumped from 2.8 percent to 13.6 percent in that first week.

“We have emphasized that if we were faced with the need to change plans—take an off-ramp—we would not hesitate to do so, but we have not taken this decision lightly,” UNC-Chapel Hill Chancellor Kevin M. Guskiewicz and Executive Vice Chancellor and Provost Robert A. Blouin wrote in an email announcement obtained by Newsweek.

Peter Hans, president of the University of North Carolina system, issued a statement Thursday responding to the NC State decision, blaming students for the school’s reversal in plans.

“This hard work is being undermined by a very small number of students behaving irresponsibly off campus, which unfairly punishes the vast majority of their classmates who are following the rules,” Hans said.

Meanwhile the University of North Carolina at Charlotte (UNCC) administrators reversed course Sunday, a decision likely influenced by the health and safety concerns presented at the three other schools.

UNCC Chancellor Sharon Gaber announced before students could even move onto campus that the school would begin classes as scheduled on September 7, but make them online only, and delay the start of in-person instruction to October 1.