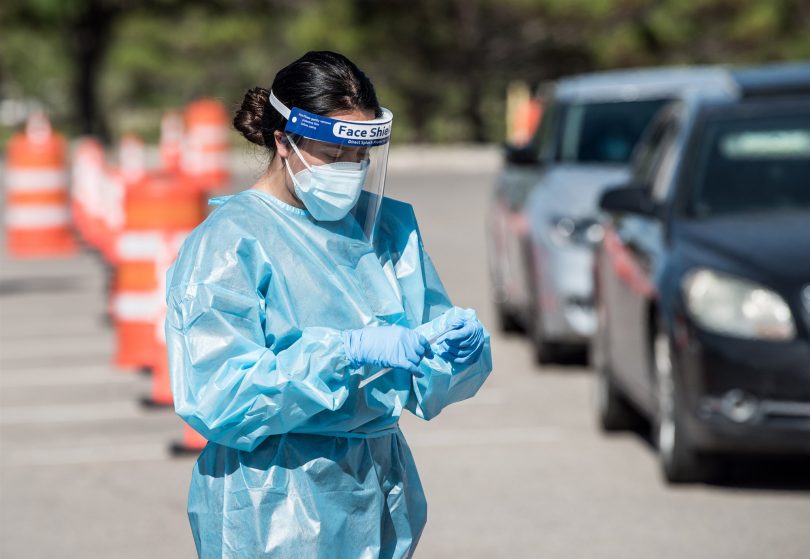 The change comes as experts continue to push for more testing, not less.

The Centers for Disease Control and Prevention quietly tweaked its guidance on COVID-19 testing Monday, making a change that could result in fewer people being tested and hinder contact tracing efforts.

The guidance now states that healthy people who have been exposed to COVID-19 “do not necessarily need a test,” as long as they don’t have symptoms. That’s a reversal from previous advice that clearly recommended testing for all close contacts of infected individuals, regardless of whether they had symptoms.

“It seems as though this new guidance is actively discouraging people from seeking testing, even if they have a known exposure,” Angela Rasmussen, a research scientist at Columbia Public Health in New York City, said. “We need more testing, not less.”

President Donald Trump has been outspoken about his belief that the United States has the most COVID-19 cases in the world because of the number of tests it carries out.

But “testing, even for asymptomatic people, is critical to keeping community transmission low since we know that presymptomatic transmission drives much of the spread of SARS-CoV-2,” Rasmussen said, referring to the virus that causes COVID-19.

An exposure is considered spending more than 15 minutes in close contact — meaning closer than 6 feet — with a person who has COVID-19. The new recommendation excludes vulnerable individuals, such as older adults and people with chronic medical conditions, who should still be tested after exposure. It also says that state and local health officials may still recommend a test.

“It’s like they’re saying we don’t have enough tests,” said Dr. Michael Saag, an infectious disease physician and associate dean for global health at the University of Alabama, Birmingham.

“In my opinion,” he said, “if a community or municipality has sufficient testing, they should continue to use the testing and ignore this recent update.”

Not all experts saw the guidance in a negative light.

“I agree that reflex testing of anybody with a significant exposure is unnecessary and not the best policy. Those individuals with significant exposures should self-quarantine for 14 days,” Dr. Amesh Adalja, a senior scholar with the Johns Hopkins Center for Health Security, said.

Self-quarantining, however, is not mentioned in the CDC’s new guidance. But the agency does address when to quarantine on a different part of its website, specifically recommending self-quarantining for 14 days after close contact with someone with COVID-19.

The CDC declined a request from NBC News to answer questions about the change on the agency’s website, referring all media queries to the Department of Health and Human Services.

Dr. Brett Giroir, the assistant secretary for health at the department, who oversees coronavirus testing for the Trump administration, said in an emailed statement that the guidance “has been updated to reflect current evidence and best public health practices.”

It is unclear what evidence he was referring to.

Giroir also said the guidance emphasizes testing for those people who have symptoms, such as fever, cough or shortness of breath, after an exposure.

That includes “residents and staff in nursing homes or long term care facilities, critical infrastructure workers, health care workers and first responders, and those individuals (who may be asymptomatic) when prioritized by public health officials,” he said.

Research has shown COVID-19 indeed can be spread via asymptomatic people. And easing up on testing of those patients would have massive implications for a standard practice in controlling infectious disease outbreaks: contact tracing.

That means testing “anyone who’s been in close contact with a known positive so that we can find out for sure whether the contact is also infected,” Saag said. “That’s important, not only for the individual’s health, but also for their contacts.”

Such a situation is occurring in Danbury, Connecticut. The Connecticut Department of Public Health recently reported a “significant spike” of 178 COVID-19 cases in Danbury during the first two weeks of August. The previous two weeks saw just 40 new cases in the town.

“This is a serious outbreak in Danbury, and we really need an all-hands-on-deck approach,” Dr. Deidre Gifford, acting commissioner for the Connecticut Department of Public Health, said in a statement. “We are urging anyone who thinks they may have been exposed to get tested as soon as possible.”