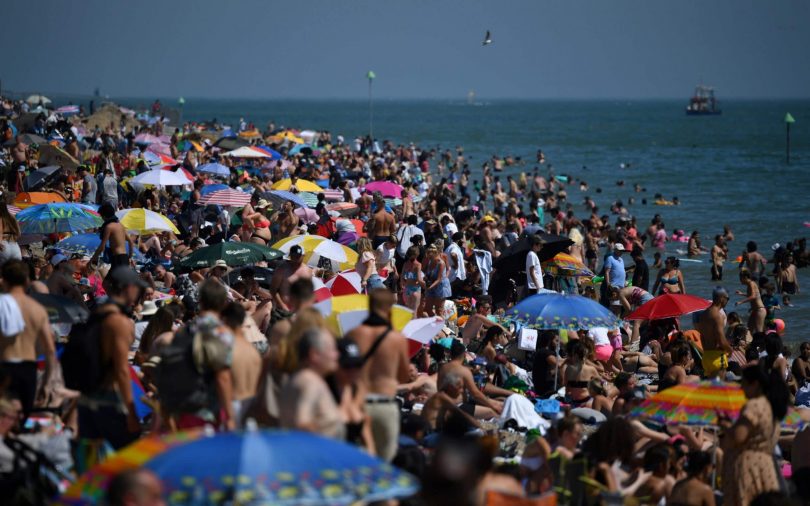 As summer comes to an end, Americans are eager to make the most of the last remaining beach days – and across the country, some public pools and beaches are open with restrictions.

In Los Angeles County, for example, beaches reopened on May 13 for recreational activities including swimming and surfing. In Georgia, pools reopened the same day, provided the facilities could follow guidelines like limiting capacity to 10 people if they can’t maintain six feet between patrons.

New York City reopened 15 of its public swimming pools on July 24 and Aug. 1. In Florida, lap swimmers can exercise in pools while following precautions like remaining six feet from other swimmers, limiting their time to one hour, and being prepared to swim only, since the showers and locker rooms are closed.

New York, New Jersey, Connecticut, and Delaware opened state beaches and lakeshores (though not those in New York City) at half capacity on May 22. Outside of the US, the French Riviera is open to recreationalists including swimmers, but they can’t sunbathe afterwards.

But some swimmers are wary: Some viruses, bacteria, and parasites thrive in water. Last year, for example, there was an uptick in crypto infections, which can lead to diarrhoea and vomiting, at pools and water parks due to a parasite called cryptosporidium that’s highly resistant to chlorine.

Fortunately, it seems highly unlikely you’ll catch the coronavirus through water, but, as always, you can catch it from other people. Here’s what to know about the risks of swimming, and how to make the smartest decision for you.

Water itself is unlikely to transmit the novel coronavirus

According to the Centers for Disease Control and Prevention, “there is no evidence that the virus that causes COVID-19 can be spread to people through the water in pools, hot tubs, spas, or water play areas.” It says that treating these types of facilities with chemicals including chlorine should “should inactivate the virus in the water.”

Even fresh or salt water is highly unlikely to spread the coronavirus since other coronaviruses aren’t stable in water, Angela Rasmussen, a virologist at the Columbia University Mailman School of Public Health, told The New York Times.

That seems to be in part due to the fact that water dilutes the spit droplets that can transmit the disease, Dr. Leonard A. Mermel, a professor of medicine at the Warren Alpert Medical School of Brown University, said during an Infectious Diseases Society of America seminar on May 19.

And, although coronavirus RNA has been found in faeces, which could theoretically spread through water if you accidentally get some in your mouth, the virus in faeces “doesn’t appear to be in an infective state,” Krista Wigginton, an associate professor of environmental engineering at the University of Michigan’s College of Engineering, told Insider.

“The bigger risk from all of these activities would be from interacting with others who are talking, coughing, or sneezing nearby,” she said.

Plus, because catching the coronavirus usually involves inhaling it, not swallowing it, water is an unlikely route of transmission, Joseph Eisenberg, chair of the epidemiology department at the University of Michigan’s School of Public Health, told Business Insider.

“In general, respiratory pathogens don’t survive in the water,” he said.

What we don’t know about coronavirus in water

There’s still a lot researchers don’t know for sure about how this coronavirus acts in water.

There’s a chance it could be spread in places where ocean water mixes with untreated wastewater that’s contaminated by the virus. The waves could then, in theory, launch the virus into particles that the wind carries back to shore, according to the South Florida Sun Sentinel.

Kim Prather, an atmospheric chemist at the Scripps Institution of Oceanography in San Diego, is currently studying whether that’s the case.

Charles Gerba, a professor of microbiology and immunology at the University of Arizona, told WebMD the virus could be in ocean water near sewage runoffs, but isn’t particularly worried about it.

“I’d be more worried about hepatitis, swimming in raw sewage discharge, or many of the other pathogens,” he said. “They present a far greater magnitude of risk, even if it turns out that coronavirus is transmitted by water.”

Take serious precautions if you plan to swim

No matter the activity, the risk of contracting COVID-19 mostly depends on the same few factors: How close are you to how many people, and for how long?

“The general principle should be: Outside is better than inside; open is better than closed; fewer is better than more people; and stay away from sick people,” Dr. Erich Anderer, a neurosurgeon and founding member of the North Brooklyn Runners group, previously told Insider.

When it comes to swimming, then, “swimming in an uncrowded pool, lake, or ocean is likely low risk compared to indoor activities and crowded outdoor activities like going to restaurants, malls, stores, and concerts,” Wigginton said.

Broken down further: Jumping in a private chlorinated outdoor pool is about as safe as you can get, while riding waves on a busy ocean-front is riskier, particularly if you’re clamoring for space to set up your towel on the sand afterward.

As for pools, lap swimming in a well-treated pool where you have your own lane and empty lanes next to you is pretty low-risk, while splashing around in a crowded indoor pool is higher risk because you’ll likely be in close contact with others’ spit as they yell “Marco Polo” or cough when accidentally gulping down some water.

It’s even more dangerous if you’re also using the locker room, where you may not only be in close proximity to strangers who aren’t wearing masks, but also touching surfaces like doorknobs and shower handles that can harbour the virus.

Ultimately, use common sense. Swimming brings massive physical and mental benefits. If you can do it with a risk level you’re comfortable with, dive in.

This article was originally published by Business Insider.