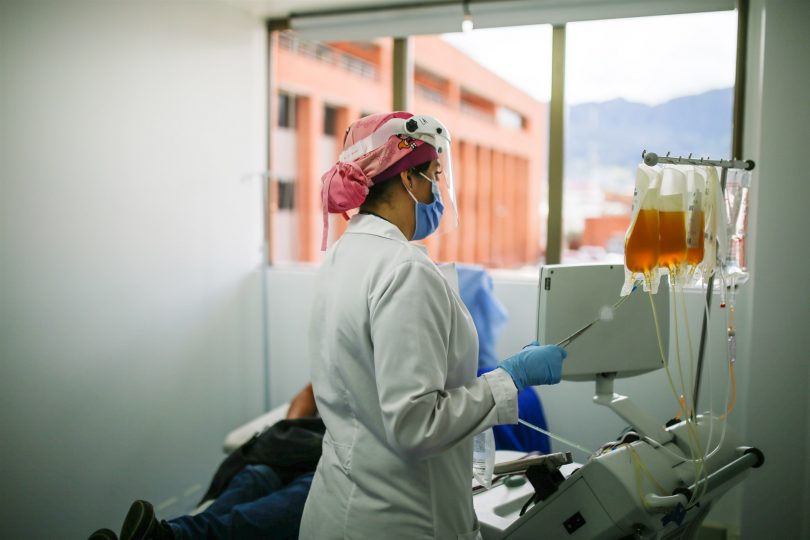 The National Institutes of Health issued the statement shortly after the FDA authorized use of blood plasma for hospitalized patients.

There is no solid evidence for or against recommending convalescent plasma to treat patients hospitalized with COVID-19, a government panel said Tuesday, less than 10 days after the Food and Drug Administration authorized emergency use of the treatment.

The COVID-19 Treatment Guidelines Panel, part of the National Institutes of Health, said it had reviewed all of the available research on convalescent plasma, including the FDA’s analysis that led to its emergency use authorization.

“There are currently no data from well-controlled, adequately powered randomized clinical trials that demonstrate the efficacy and safety of convalescent plasma for the treatment of COVID-19,” the group wrote online.

Dr. Eric Topol, director of the Scripps Research Translational Institute in California, tweeted that it was an “important” statement. Topol has previously criticized the FDA’s emergency use authorization for convalescent plasma.

A new and important statement by @NIH that is in sharp disagreement with the "very historic breakthrough" and "lifesaving" impact of convalescent plasma by @SteveFDA @SecAzar @realDonaldTrump https://t.co/k2kAHMqHh0 pic.twitter.com/giSnjO4VKa

The data cited by the FDA were based on a preliminary study of convalescent plasma from the Mayo Clinic, which compared a small subset of patients who received either a high or a low concentration of COVID-19 antibodies in the plasma. The study suggested some benefit for patients who were sick enough to be in the hospital but had not been placed on ventilators. However, there was no significant difference in death rates.

One other small study from China, published in August in the Journal of the American Medical Association, mirrored the Mayo research. It did not show that the plasma helped people survive COVID-19, but it suggested a clinical improvement among a specific group of patients: those who were in the hospital and had trouble breathing but had not yet deteriorated to the point of needing ventilators.

More than 72,000 patients with COVID-19 in the U.S. have been treated with convalescent plasma. However, the panel said, “convalescent plasma should not be considered standard of care” until more robust studies are completed — specifically randomized, placebo-controlled clinical trials, which are considered the gold standard because they evaluate whether a treatment works by comparing it to a placebo.

Those studies continue, but they have had trouble enrolling participants. Convalescent plasma is considered safe, and it is available for physicians desperate for anything that might help patients.

Cassiere said he would continue to use convalescent plasma on his very ill patients if necessary, despite the new statement from NIH.

“I have to treat patients right now. I can’t wait three to six months for an article to come out. My patients would be dead by then,” he said.