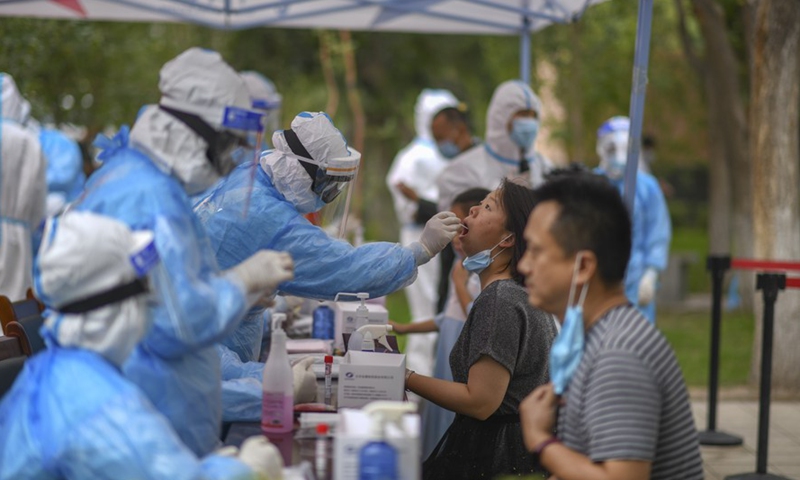 China’s virus prevention authority published a plan to further strengthen the country’s capacity for COVID-19 nucleic acid testing by specifically deploying facilities in local regions, which experts said will fully prepare the country for any potential recurrence of the COVID-19 ahead of an upcoming flu season.

Every 1 million residents should have one hospital or medical institute that can carry out tests. Besides hospitals and other medical institutes, a total of 100 public test labs will be deployed across the country to add to the testing capacity, and each will be able to test 10,000 samples a day, according to the new plan by the State Council’s joint prevention and control mechanism, the Xinhua News Agency reported on Monday.

The country will be managed in eight regions, and each will have testing capacity of 500,000 to 700,000 a day, so that in five to seven days, all people in a region could be tested, read the plan.

Staff training will be completed before October. A comprehensive, accurate and timely information management system for testing will also be established, according to the plan. 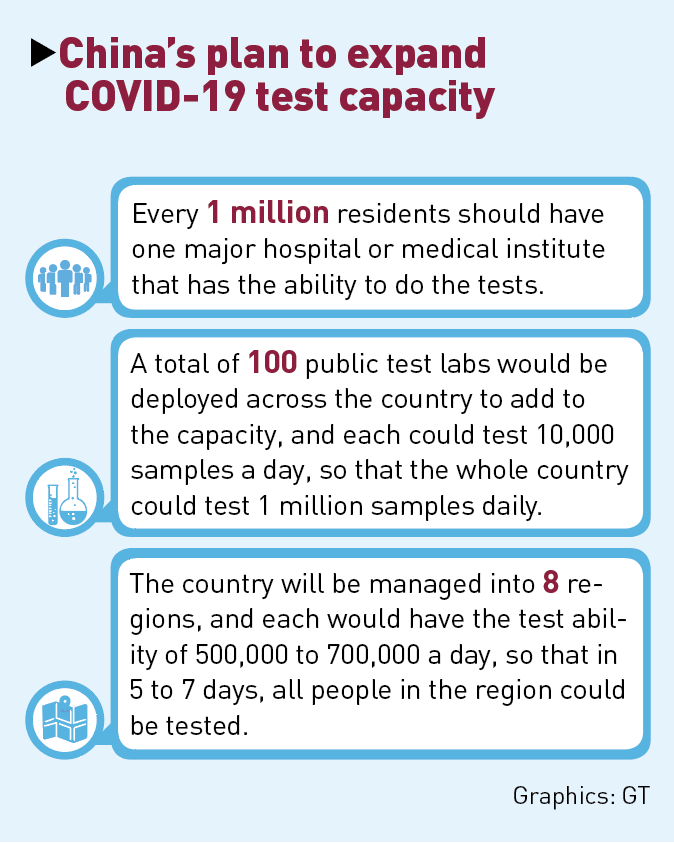 The plan was released ahead of the upcoming autumn and winter seasons as virus prevention work has been normalized, Wang Peiyu, deputy head of Peking University’s School of Public Health, told the Global Times on Monday.

“During the flu season, many people might have symptoms similar to those of COVID-19, so all local regions should have the ability to distinguish between COVID-19 and flu.”

It is also key to avoid outbreaks caused by imported cases. These may be different than those detected in China in terms of gene sequences, so it will be harder to test for them, Yang Zhanqiu, a professor at the pathogen biology department of Wuhan University, told the Global Times on Monday.

By the end of September, each region should have designated comprehensive hospitals and hospitals for infectious diseases, and all levels of disease control and prevention institutions should have the capacity to collect and test nucleic acid samples. Each county should have at least one hospital with this capacity as well, the plan said.

By the end of 2020, all secondary comprehensive hospitals should have this capacity and cities should complete the construction of testing bases and public test labs. A fast reaction mechanism should be built to respond to regional clustered outbreaks, allowing tests on a certain group of people to be completed in a short time.

Wang said that for big cities such as Beijing, these needs could be met as there are many qualified hospitals and specialized institutes. For smaller cities and counties, there will be at least one hospital that could ensure the tests are done, and the number of such hospitals and medical personnel who conduct the tests will be decided by the local population.

Mobile labs could support the work if needed, Wang added.

Wang and Yang said that with such measures and previous experience, China would be completely able to tackle potential outbreaks.