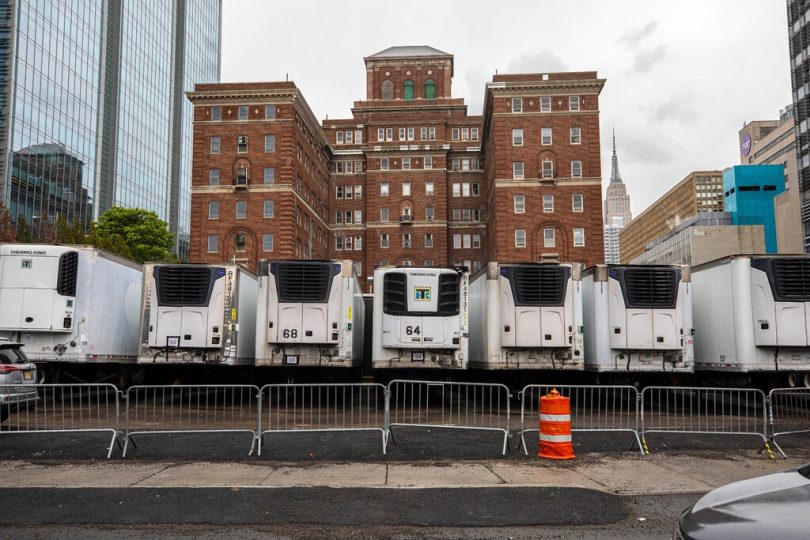 New regulations require a ramp-up in testing for patients with symptoms, as well as people who weren’t tested before they died.

Cough, fever, chills — with fall fast on the way, symptoms alone won’t be useful in distinguishing Covid-19 from similar-looking cases of the flu. That means routinely testing for both viruses will be crucial — even, perhaps, after some patients have already died.

That will at least be true in New York, where officials recently announced a ramp-up in post-mortem testing for the coronavirus as well as the flu. Deaths linked to respiratory illnesses that weren’t confirmed before a person died are to be followed up with tests for both viruses within 48 hours, according to the new regulation.

“These regulations will ensure we have the most accurate death data possible as we continue to manage Covid-19 while preparing for flu season,” Dr. Howard Zucker, the state’s health commissioner, said in a statement last week.

Deceased hospital patients and nursing home residents, as well as bodies in the care of funeral directors or medical examiners, will be among those targeted for follow-up testing. If experts at a local facility can’t perform the test themselves, they can ask the state to run the test for them at its public health lab.

Although the results of these tests will be too late to change the course of treatment for the deceased, they can still help health officials track the prevalence of both types of infections, as well as indicate whether to warn close contacts of the deceased that they may need to quarantine.

“People need to know who around them was sick,” said Dr. Valerie Fitzhugh, a pathologist at Rutgers New Jersey Medical School. “If someone can’t be tested in life, why not test them soon after death?”

Putting regulations in place ahead of time will also encourage counties to bolster their testing readiness ahead of autumn and winter, when seasonal viruses like flu and respiratory syncytial virus, or R.S.V., tend to thrive, said Dr. Mary Fowkes, a clinical pathologist at Mount Sinai Hospital in New York. In many parts of the country, coronavirus cases are still ratcheting up every day — and will become more difficult to track when similar sicknesses muddle the picture.

“I think that is important to prepare for,” Dr. Fowkes said.

In the early days of the pandemic, New York, like the rest of the country, struggled to rein in the virus. Many illnesses went untested, including those of several thousand people whose deaths were later reclassified as presumed, but unconfirmed, cases of Covid-19.

A lot has changed since the spring, said Gareth Rhodes, deputy superintendent and special counsel at the New York State Department of Financial Services and a member of Gov. Andrew M. Cuomo’s virus response team. After a sputtering start to testing in March, New York is now running about 100,000 coronavirus tests a day, with positivity rates hovering around 1 percent or less. While hundreds remain hospitalized throughout the state, daily deaths attributable to Covid-19 have averaged in the single digits since late August.

The new regulations also stipulate that living patients with flulike symptoms or a known exposure to the coronavirus or a flu virus should be tested for both pathogens. That makes it less likely that a case will be missed in the first place.

“We track fatalities very closely,” Mr. Rhodes said. At this point, he added, New York’s coronavirus testing regimens in medical settings are pretty consistent. “You can’t really be a hospital in New York right now without testing,” he said.

The regulation doesn’t apply to all deaths — just those suspected of being linked to a respiratory illness.

That means the new rules on post-mortem testing probably won’t change coronavirus case numbers much, if at all. Since the announcement, made last Sunday, the Wadsworth state lab has not yet received a request to process a post-mortem test, Mr. Rhodes said.

Still, the regulation may come in handy if, for example, a death were to occur en route to the hospital or shortly after arrival, or if an emergency prompted a temporary lab closure so that tests could not be immediately run. Others might die at home, or elsewhere outside the care of a hospital or nursing home, without easy access to tests.

“This is designed to catch anything that fell through the cracks,” said Dr. Rosemary She, a pathologist at the University of Southern California’s Keck School of Medicine.

Thorough testing can also affect which bodies are autopsied at medical examiners’ offices, where resources and staff have been strained, said Dr. Erin Brooks, a pathologist at the University of Wisconsin-Madison. Someone whose cause of death can be confirmed by a positive test for the coronavirus, for instance, might not need to be investigated further.

A number of pathologists noted that while coronavirus testing for sick patients is just about ubiquitous in medical settings in other states, combination testing that includes the flu, including post-mortem testing, is not as common and may need to be considered.

More laboratories will most likely need to invest in tests that can detect multiple types of pathogens at once. One of the tests run at Wadsworth, for instance, is a so-called respiratory panel, made by a company called BioFire, that simultaneously searches for genetic material from more than 20 types of bacteria and viruses, including the coronavirus and multiple types of flu viruses.

Some experts have postulated that proactive measures like continued physical distancing and vigilant mask wearing might soften the blow of this year’s flu season, as they appear to have done in the southern hemisphere.

But “it’s in our best interest to prepare for the worst,” Dr. Fitzhugh said, “and hope for the best.”