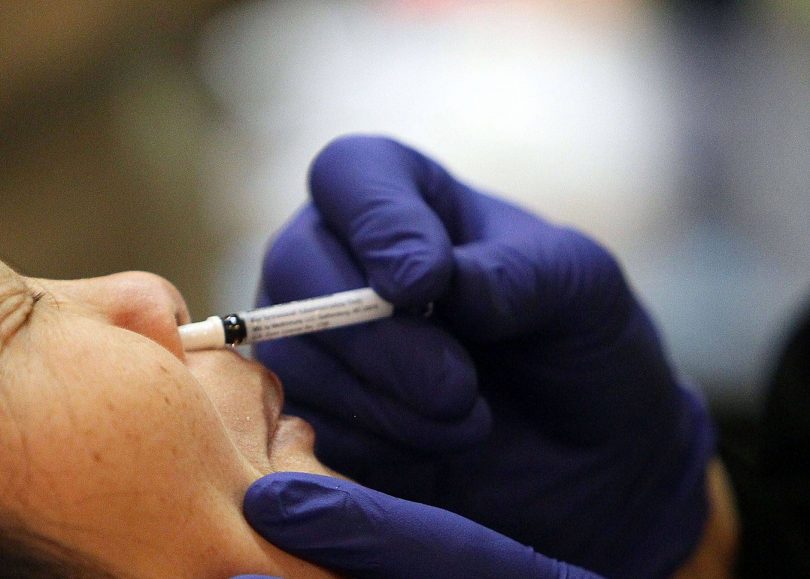 The newest COVID-19 vaccine candidate to start human testing is the first where volunteers won’t get a painful injection. Instead, they’ll receive a spray through the nose.

China on Wednesday approved phase one human testing for the nasal spray vaccine, which is co-developed by researchers at Xiamen University and Hong Kong University, as well as by vaccine maker Beijing Wantai Biological Pharmacy Enterprise Co.

Intranasal spray has previously been developed as a vaccine for the flu and is recommended for use among children and adults who want to avoid the more common needle injection. While it is not the most frequent choice for delivery, scientists around the world are working to develop sprays as an alternative to muscle jabs for all sorts of vaccines.

The intranasal vaccine is the 10th candidate from China to proceed to the crucial stage of human testing. The country is building its lead in vaccine development after Western front-runner AstraZeneca PLC had to pause its late-stage human trial to investigate a spinal cord illness in a person who received its experimental shot.

The intranasal spray contains weakened flu virus that carries the genetic segments of the coronavirus’s spike protein. Administered through the nasal tract, it mimics the natural infection of respiratory viruses to stimulate the body’s immune response against the pathogen that cause COVID-19, according to Science and Technology Daily, a paper affiliated with China’s Ministry of Science and Technology.

Some scientists hope a vaccine that gets sprayed through the nose may have a better chance of stopping the spread of the insidious virus through respiratory tracts. A needle injection can arouse a systematic immune response to prevent severe illness, but may not be strong enough to ward off infection.

Preclinical studies have shown the nasal vaccine can significantly reduce lung damage among mice and hamsters when challenged with the coronavirus, Science and Technology Daily reported.

The nasal spray joins about 35 other candidates currently in human testing as the global race to be first with an effective vaccine against the deadly pathogen intensifies. In the wake of AstraZeneca’s setback, China’s most advanced vaccine developers, including CanSino Biologics Inc. and state-owned China National Biotec Group Co., have emphasized the safety of their own shots.

CNBG said the two shots it is testing are effective in staving off infection. None of the Chinese diplomats and workers traveling to virus hot spots overseas have reported infections several months after receiving the vaccines, Zhou Song, CNBG’s general counsel, said in a article published in Science and Technology Daily. CanSino, which employs a vaccine-making technique similar to that of AstraZeneca, said its military-backed shot is safe and hasn’t caused any severe side effects in testing.

Zhu Tao, CanSino’s co-founder and chief scientific officer, defended the vaccine against criticism that it appears to trigger fewer antibodies compared to those generated by rivals including AstraZeneca and Moderna Inc. The variation in antibody readings is a result of using different measuring methods, Zhu said in a presentation to investors this week.