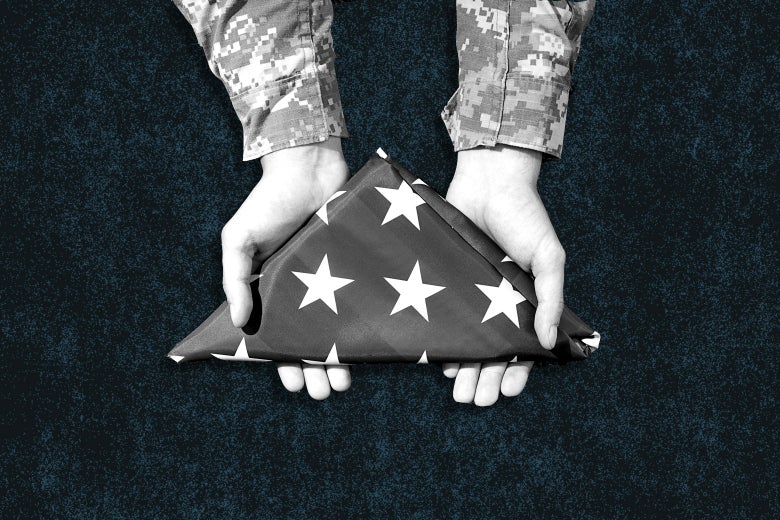 This is part of Six Months In, a Slate series reflecting on half a year of coronavirus lockdown in America.

As the number of Americans dead from the coronavirus nears 200,000, I struggle to get my mind around the weight of grief pressing down on our country. And the more I struggle, the more I return to my memories of a day, long ago, when I was a small child, home from school with a cold, playing in my room. I heard the whack as the mail was dropped at the front door of our New York apartment, the way it was back then, twice a day, morning and afternoon. Then heard something I had never heard before and was never to hear again: the sound of my mother screaming.

She wasn’t a screamer. But on this day, April 10, 1945, a telegram had arrived from the War Department announcing that her youngest brother, my Uncle Burton, was missing in action. The war was almost over. The Americans were in Berlin, but my 21-year-old uncle was still flying his B-17 over Belgium. He was the navigator, and when the plane was struck and the communications knocked out, he left his seat in the rear of the plane and moved forward to tell the pilot where they were. He had listed my mother as his next of kin.

A few minutes later, I heard our housekeeper phoning my grandmother’s doctor, asking him to please go to her apartment because her son had just been reported missing in action and she was “taking it very hard.” Later, when my older sister came home from school, I was told to say nothing until after she had drunk her milk and eaten her cookies. When I was finally allowed to tell her the news, she buried her face in the sofa pillows and sobbed, “It is not fair. He was my favorite.”

That evening, my grieving grandmother came for dinner. Our rabbi dropped by, too, to offer consolation and encouragement that “missing” meant there was still hope. The weeks that followed were flurries of phone calls as the families of crew members made contact with one another, sharing scraps of information. There was momentary jubilation when one crew member who had been rescued reported that he had seen four parachutes, days of false hope that maybe, just maybe, one of those had been Burton’s. And then the letters and parcels we had sent him before he was reported missing were returned, each one bringing its fresh wave of grief.

When I contemplate the more than 190,000 Americans dead from this virus, I keep remembering the way this one death ravaged our family. For an entire year, my mother wore only black, and even after she felt able to return other colors to her wardrobe, she never stopped grieving. As long as she lived, she lit a candle every April 10. Years later, when we visited the memorial in London’s St. Paul’s Cathedral to the dead Americans who had been stationed in Great Britain during World War II, she lit another candle.

My mother was 16 when Burton was born; losing him, my father always said, was like losing a son. As children, my grandparents had come to the United States from Hungary during the wave of Eastern European immigration at the start of the 20th century. They struggled, but by the time Burton arrived, the older sons had established themselves and were able to save the money to send him to college. He was the late child, the treasured Benjamin, on whom the family’s hopes rested. He would have an easier time—they would see to that.

Years later, while staying overnight at my grandmother’s apartment, I awoke in the middle of the night to hear her sobbing. When I asked what was wrong, she said she was grieving for her lost son. And then she said words that haunt me still: “I hope you never know what it is for a mother to bury a child.”

The last time I saw this much-loved uncle, just before he was shipped overseas, he looked proud and resplendent in his uniform, with Army Air Force wings pinned on his lapel. He took my sister and me to Rumplemeyer’s and gave us our own miniature sets of wings. He seemed so grown-up. It wasn’t until I turned 21 myself, and then saw my children and then my grandchildren turn 21, that I came to realize how young he was and what his death—this one death—did to our family. It affected each generation differently, of course, but each of us was marked by this loss. The greatest grief was my grandmother’s, and then my mother’s and her brothers’. But my sister and I felt it too. That summer, I was at camp when the Japanese surrendered and the war was finally, totally over. Everyone was cheering and jumping up and down, but I remember I went into my bunk and cried. I knew my uncle was not coming back. No more ice cream treats.

This same misery—or at least a variation unique to every family—is raking through America hundreds of thousands of times. Their losses—their pain—will stay with them as long as anyone in the family is alive to remember 2020. It is as if a suffocation has descended on our country seeping into its soil and soul. Wartime deaths, of which we have endured our share, at least are somewhat, sometimes, cushioned by the sense that such deaths have a purpose, that there was something worth fighting for—maybe even worth dying for. But there is something particularly demoralizing, even destabilizing, about a capricious disease taking so many lives. It might be tempting to anesthetize ourselves against this unrelenting, daily loss by getting in the habit of ignoring it. But numbness cannot be the answer. That would not only be disrespectful to those who have been lost but also damaging to us individually and collectively. Although numbers are abstract and distancing, we can recognize that each cipher is a human being whose absence inflicts pain on circles of others.

We Americans were particularly unprepared for this, believing that we were protected from such plagues of old, by the potency of our science. After all, we had drugs. We had vaccines. We had legions of smart, skilled people who were capable of vanquishing just about anything. At least in this country. And now these invisible droplets, carried in the essential air we need to breathe, are proving to be a terrible enemy.