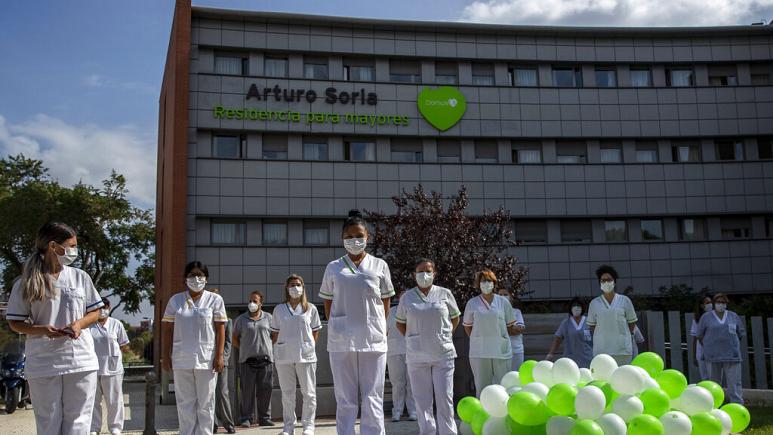 “The system has already collapsed,” said Madrid-based paediatrician Natividad Gil García. “In the next two weeks, if we continue like this, it will definitely sink.”

Gil does not hide her despair over the crisis that primary health care is suffering in Madrid, the worst-affected region in Spain with over 175,000 COVID-19 infections since the beginning of the pandemic and almost 9,000 deaths, including 115 in the last week.

She works at the Monóvar Public Health Care Center, located in a neighbourhood where the cumulative incidence is up to more than 400 cases per 100,000 people.

Although other areas of the city are registering almost double that figure, Gil warns of the rapidly worsening situation.

“Normally, in September and October I used to have between 20 and 30 children a day, but this year I’m already having 55 even though some year groups haven’t already gone back to school,” she said.

What will happen by at the end of the month when all the students have gone back to school and infections increase?” asks the paediatrician at the entrance to her workplace, under a banner with a green heart, which has become the symbol of a fight to protect public health.

Gil and her 30 colleagues at the centre have supported the 15-minute strike called by several unions in response to what they consider “the abandonment and contempt for health professionals” by the Madrid government.

It was just a first warning shot. Madrid doctors have already announced an indefinite strike starting 28 September unless the regional administration sits down to negotiate.

“That it is our last resort, none of us wants to go on an indefinite strike because it means putting lives at risk,” said María Teresa Hernando, a family doctor at Monóvar. “Our job is to help the most vulnerable people, but we do not have the resources to do so.”

Spain, after Russia, is the European country with the most COVID-19 cases, with more than 600,000. It has also recorded one of the highest levels of deaths per capita, with 64 deaths per 100,000 people.

Healthcare centres are on the frontline of containing the pandemic, an added burden to a basic pillar of care that in Madrid has seriously deteriorated since the economic crisis of 2008.

“The pressure we are facing is tremendous,” said Julián Ezquerra, leader of the main unión representing primary care doctors in Madrid, Amyts, and promoter of the strike.

“In these past years, the number of patients per doctor and the bureaucracy has doubled. But now COVID-19 has exacerbated the workload, some doctors can have up to three or four patients called in at the same time slot either by phone calls, face-to-face visits, emergencies or home care. It’s crazy.

“We want an improvement in working conditions but not only that. Madrid needs more doctors. Half of all recently-qualified family doctors have opted to leave Madrid, either to other autonomous regions or abroad, because they are offered better contracts.”

In addition, about 15% of the workforce is off work, many due to the work-related stress situation caused by the pandemic or because they are over 60 years old and therefore have an increased risk of severe illness form COVID-19.

The lack of doctors is preventing some health centres from opening in the afternoon.

“Yesterday they called us from a nearby health centre,” said Hernando. “They needed our help because there was only one doctor there, he was doing two shifts in a row but still he did not have enough time to see all the patients or to talk to them on the phone. They were at risk of closing.”

The health workers at the Public Health Care Center recognise that COVID-19 takes up 80% of their time.

“We deal with the cases that arrive, we also do the contact tracing because there aren’t enough people, we organise the PCR testing, we make the calls to get the results and do all the follow-ups. Everyone who is in primary health care is suffering from this overload of work but also the patients as well,” complains Gil.

In fact, the crisis has led Carina Escobar, president of the Plataforma de Organizaciones de Pacientes (platform of patients’ organisations) to describe it as a “parallel pandemic”.

In other words, the COVID-19 emergency has left many people suffering from other chronic health conditions without any medical care.

“We haven’t learnt anything from the first wave,” said Escobar “We are calling for more information, more agreed procedures and COVID-free areas which will enable us to continue working in the health centres.”

But the fact that none of this has been planned and that primary health care is in a state of collapse means that once again we are going to be [putting] patients at risk,” explains Escobar.

Hours before the public health centre protest, the president of the Comunidad de Madrid (autonomous region of Madrid), Isabel Díaz Ayuso, announced that €80 million was to be invested in primary health care to improve working conditions and increase the workforce.

“We need them and we recognise them. There has to be a profound change across the entire national health service and the Comunidad de Madrid wants to lead this transformation,” assured Ayuso in the regional assembly.

It is a promise which, for now at least, has failed to convince family doctors.

“We’ve reached the end of the road. There are colleagues who have given their lives in the struggle against COVID. We don’t want promises or numbers, we want action,” said Gil.

For the moment, the strike action is still planned to go ahead.