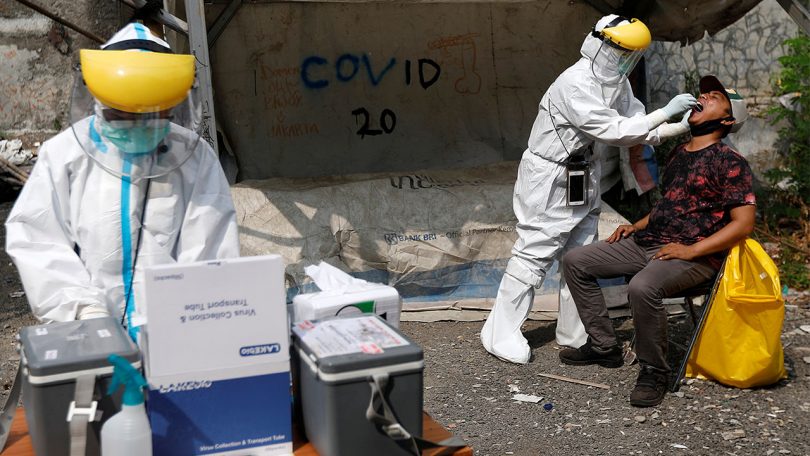 The World Health Organization (WHO) announced today that countries representing close to two-thirds of the world’s population have joined its plan to buy and fairly distribute COVID-19 vaccines around the globe. It also unveiled the mechanism through which it plans to allocate the vaccine as it becomes available, aiming “to end the acute phase of the pandemic by the end of 2021.”

“It is a huge success to have equivalent to 64% of the world’s population signed up,” Alexandra Phelan, a lawyer at Georgetown University who specializes in global health policy, wrote in an email. “However, this doesn’t reflect the deeply unequal power dynamics in global health and vaccine manufacturing capabilities that may still challenge equitable access to vaccines.” China and the United States are notably absent from WHO’s list of partners in the COVID-19 Vaccines Global Access (COVAX) Facility, she and other observers noted.

With nearly 1 million deaths reported worldwide from COVID-19, and the Northern Hemisphere heading into its first winter in the pandemic, SARS-CoV-2 still has the world in its grip. WHO has pushed countries to sign up for a plan that will buy a vaccine in huge quantities and distribute it in an equitable way. But it has been grappling with two big issues: how to get high-income countries to join, instead of hoarding early vaccine supplies for their own populations; and how to share the vaccine in a fair way once it becomes available.

“As of today, 64 higher income countries, including 29 economies operating as Team Europe, have submitted legally binding commitments to join the COVAX Facility,” Seth Berkley, head of GAVI, the Vaccine Alliance, said at the press conference. An additional 38 countries are expected to sign soon, he said. These countries will have access to the vaccines in the COVAX portfolio and will pay for their own doses. Lower income countries that have joined COVAX will have vaccine doses purchased for them; there are 92 such signers.

The list of high-income countries that have joined includes Canada, Japan, New Zealand, and Peru. But “The fact that the U.S. is not part of this conversation at all, as far as I can tell, is incredibly distressing,” says Ashish Jha, dean of Brown University’s School of Public Health. Asked about China’s absence, Berkley said the goal is to work with every country in the world. “I can assure you that we have had conversations and will continue to have conversations with all countries,” he said.

Many questions remain about how the COVAX Facility will work. So far, just $700 million has been raised to pay for the vaccine in lower income countries, short of the $2 billion thought to be needed by the end of the year. And it is not clear how the deals many countries already have made directly with vaccine manufacturers will impact WHO’s plans. “I think the big question for COVAX, and the thing that will determine whether COVAX can really deliver on its vision, is to what extent those domestic deals that are being done by rich countries mean that they won’t need COVAX so much themselves, and therefore might not provide sufficient financing for the non–self-financing countries,” says Alex Harris of the Wellcome Trust.

In an ideal world, there would be no such bilateral deals, says WHO’s Mariângela Simão, “but that’s not how it works.” And negotiations on many of those deals were already underway when COVAX was being set up, she says. As a result, such deals “are a danger in a way” to the plan.

WHO’s “fair allocation mechanism” proposes distributing vaccine in two phases. In the first phase, all countries would receive vaccine proportional to their population; initially enough vaccine to immunize 3% of their population, with the first doses going to frontline workers in health care and social care. Then, additional vaccine would be delivered until 20% of a nation’s population is covered. WHO envisages that these doses would be used to immunize those at the highest risk from COVID-19: elderly people and those with comorbidities.

In the second phase, vaccine to cover additional people would be delivered to countries based on how urgently immunizations are needed. The framework suggests two criteria should be used to decide priority:

Ezekiel Emanuel, a bioethicist at the University of Pennsylvania, criticized WHO’s approach in the first phase. Countries with the biggest need should be at the top of the list from the start, he says. He compares the situation to a doctor facing an overflowing emergency room. “The doctor doesn’t go out into the waiting room and say: ‘I’m giving 3 minutes to everybody sitting in the waiting room.’ The doctor says: ‘All right, who’s got the most serious illness? … I’m going to attend to you first.’” At the moment, he notes, sending vaccine to South Korea, New Zealand, or many African countries would not do much to reduce deaths from COVID-19 because these nations have low case rates; he says the vaccine could be put to better use elsewhere.

But WHO’s Bruce Aylward notes new outbreaks can suddenly pop up in new places. “Remember, we are dealing with a ubiquitous threat (the virus) and ubiquitous vulnerability (highly susceptible high-risk populations)!” Aylward wrote. “Hence you go for rapid risk reduction as [the] first step.”

Allocating some vaccine to every participating country in the beginning may have been necessary politically, Jha says. “I think [WHO is] probably balancing between trying to get enough people protected, and trying to create enough of a sense of buy-in that people are going to be willing to chip in.” Emanuel says he understands WHO’s position, “But we shouldn’t confuse politics with ethics.”

There are numerous caveats to WHO’s plan, most importantly that the framework was written without knowing the characteristics of whatever vaccine first becomes available. The mechanism is based on “the current working assumption for a vaccine with a broad safety and effectiveness profile,” WHO says. If the first available vaccine turns out to be much better at protecting young people than elderly people, for instance, a different strategy might be needed. “I have 40 years of public health and [helping draft the plan] is definitely the biggest challenge I ever faced,” Simão says. All kinds of models and calculations were used but there is a huge amount of uncertainty, she says, noting the document is called a “final working version.” Until more is known, she says, “this is as good as it gets.”

The plan faces other risks. For example, countries could decide to use export controls or other means to restrict vaccine supplies and deny them to COVAX, Phelan says. “We still need global commitment to set the norms of unacceptable conduct during vaccine distribution,” she says, “including discriminatory distribution within countries.” But there is also the opportunity that this mechanism, patched together as the world scrambles to fight a pandemic, becomes a norm for future pandemics, she says. “As the [WHO] director-general has noted, we need to be preparing for the next pandemic now, in addition to responding to COVID.”