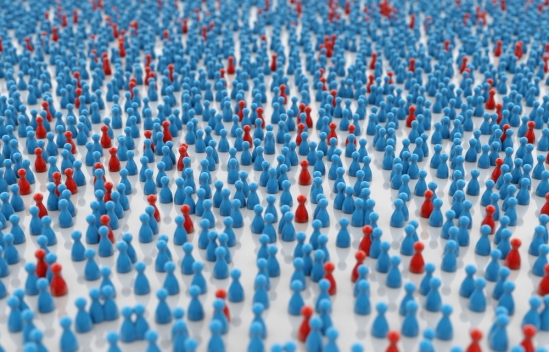 In July, after weeks of steady but relatively slow increases in COVID-19 infection rates in Santa Barbara County, the number of cases per day began a steep climb, setting records with alarming frequency. By month’s end, the cumulative number of new cases had about doubled.

UC Santa Barbara researchers detected early signs of that surge, and in a population where the SARS-CoV-2 virus is largely invisible, but still potent: asymptomatic carriers. In the research for a paper currently published in pre-print form on MedRxiv, UC Santa Barbara biologists Carolina Arias and colleagues got an unusual glimpse of how COVID-19 can travel silently through a community.

“Asymptomatic individuals are those with positive results who never develop symptoms,” said Arias, who led the study. Because they never feel sick, she explained, they could unknowingly transmit the virus to others as they circulate in the community. The same applies to presymptomatic individuals — those who do not have symptoms at the time of the test, but develop them later. The Center for Disease Control’s current best estimate predicts that 40% of COVID-19 infections occur via people who show no symptoms.

Being able to manage a virus that can spread covertly is one crucial key to overcoming the pandemic; it’s especially important in places such as college and university campuses, which are mulling how to reopen in a safe and responsible way. High-density classes and close, shared living spaces are perfect conditions for the spread of the virus, and, according to the study, “while the COVID-19 testing has focused on the older, more medically fragile patients with increased mortality risk, an increasing burden of disease has emerged in those aged 19-30, many of whom attend colleges in the U.S.”

To get a sense of the prevalence of the virus in asymptomatic carriers in the UC Santa Barbara community, the team conducted a surveillance study to search for signs of the novel coronavirus in 1808 volunteers who had no symptoms of COVID-19. From May 28 to June 11 and from June 23 to July 2, the volunteers contributed oropharyngeal swabs with tissue samples taken from the backs of their throats. The samples were analyzed by both the conventional, CDC-approved RT-PCR coronavirus detection test and a CRISPR-based assay named CREST, developed at UC Santa Barbara.

While prevalence of COVID-19 cases generally increases with increased testing, these results were especially noteworthy given that the patients might never have sought testing, or waited until a significant amount of time had elapsed, passing the virus to others in the meantime.

“Surveillance testing allows us to detect cases in individuals who would not necessarily seek testing,” Arias said, “for instance, those with mild symptoms or persons who are completely asymptomatic.”

The positive RT-PCR results triggered a process by which the coded information and a sample were turned over to Cottage Hospital clinicians, who in turn accessed a protected database to identify the people, and informed the Santa Barbara County Public Health Department (SBCPHD). After the results were confirmed by a CLIA-certified lab, SBCPHD contacted the individuals, advised them to self-quarantine and initiated contact tracing to find other people who might unknowingly have been infected.

The results, the researchers noted, also “coincided with changes in community restrictions and public interactions.” The first run of testing came months into the statewide stay-at-home order, while the second run was conducted weeks after local isolation restrictions had been lifted and as the region was pushing for the next stage of reopening.

For the clinicians on campus, the results underscore the general unpredictability of the SARS-CoV-2 virus.

“I was surprised that we had no positives for the first wave that we tested,” said Dr. Javanbakht, Student Health Services’ medical director, who is also a co-author on the paper. The too-good-to-be-true scenario had him wondering if he was mistaken in assessing COVID-19’s prevalence or if the disease had already come and gone.

“Once the positives started showing up, that was a bit more in line with what I had envisioned,” Javanbakht continued. “However, it brought up the possibility that we were seeing the introduction of the disease into a community.”

The researchers’ results precede the World Health Organization’s August 18 warning that people in their 20s, 30s and 40s are driving the current surge in COVID-19 cases worldwide. Many of these people are “unaware they are infected.”

“Typical social and behavioral patterns of college-aged individuals increase the likelihood of covert transmission,” said Holly Smith, UC Santa Barbara’s COVID-19 clinical operations coordinator, and contributor to the paper. “While poor outcomes from infection may be rare for this age group, it can present significant risk to others in our community who are of advanced age and/or have vulnerable conditions.”

One bright spot: The CREST assay, developed at UCSB at the beginning of quarantine last March in an effort to extend testing capacity for the novel coronavirus, has proved itself at least as effective as the CDC-approved RT-PCR test. According to the study, with the exception of one positive RT-PCR result that was not confirmed by the CREST assay, the UCSB-developed test was in “perfect concordance in both positive and negative results” with the gold standard of novel coronavirus tests.

“We are working on accurately determining the threshold of detection with our test,” Arias said. “All diagnostic assays, including the RT-PCR, will miss samples where the virus is present at very low levels.” Because surveillance relies on frequent, repeated testing to pick up the prevalence of the SARS-CoV-2 virus in the community, it isn’t necessary for the CREST assay, or any other assay to detect all cases in the surveillance context. As to the single positive RT-PCR result that CREST did not confirm? It was also left unconfirmed by the diagnostic CLIA lab test.

Given Santa Barbara County’s current Tier 1 (widespread) status on the state’s blueprint for reopening, UC Santa Barbara is not currently authorized to hold any indoor lectures, and intends to conduct roughly 95% of classes in a remote format. In the meantime, campus faculty and staff are working not only to build testing capacity but also develop protocols to mitigate the spread of COVID-19.

A return to some semblance of normalcy at UCSB will require some form of surveillance testing, perhaps submitting samples more than once a week to keep tabs on the virus in the asymptomatic or presymptomatic population.

“It would certainly help us prepare and detect potential outbreaks early on,” Arias said.

The practical experience of mass screening also was helpful for the UCSB clinicians in their efforts to protect the campus community from COVID-19 whenever students are able to return. It will be a challenge: Just a couple of weeks after in-person instruction resumed at some U.S. universities, outbreaks in dorms and off-campus gatherings have caused some colleges to reconsider remote learning.

“Campus testing plans that include a level of frequency for asymptomatic surveillance testing may become the gold standard for any effective campus reopening,” Smith said.