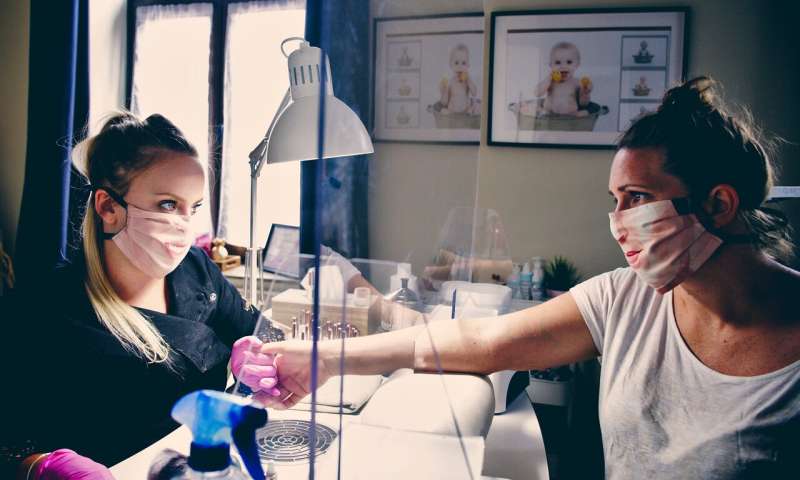 A new National Science Foundation-funded survey of six states has found that during the past two months, more people are wearing masks, vaccine uncertainty is on the rise, and many people are overestimating their risk of becoming seriously ill and dying from COVID-19.

The results are in a new report published this month by the Risk and Social Policy Group, a team of more than 15 scholars across the country that includes University of Central Florida associate professor Lindsay Neuberger.

“One of our primary goals is to get essential COVID-19 data into the hands of policymakers to try to help guide not only policy but also the effective communication of those policies to increase public health,” says Neuberger, who is with UCF’s Nicholson School of Communication and Media.

“These data provide valuable insights into public perceptions and behavior and demonstrate where messaging should be focused, such as priority populations, and potential pathways for effective communication,” she says.

The survey, conducted in August, is the second of a three-part, six-month study that is examining perceptions and behaviors in response to the risk of COVID-19. The first survey was completed in late May and early June.

Respondents from the first survey were surveyed again for the next round to track any changes.

More than 2,000 people responded to the second survey. The respondents were from Colorado, Idaho, Louisiana, Massachusetts, Michigan and Washington.

The researchers selected the states to capture variation in U.S. demographic and social factors.

The researchers found that since late May and early June, indoor mask wearing in public places has increased among the respondents from 66% in the first survey to 79% in the second survey.

Although the reasons for this can’t be determined from the survey, Neuberger says the increase may be the result of more evidence that supports mask wearing and an increase in mask policies at state, local and business levels.

Survey respondents least likely to wear a mask in indoor, public spaces were conservative men with high school and less than a four-year degree education levels.

Neuberger says one way to reach people not wearing masks may be to focus on efficacy in risk communication messaging.

“Our data suggest one of the strongest predictors of mask wearing is actually efficacy—so the beliefs that one is both able to wear a mask and the belief that a mask can be effective in avoiding a risk,” she says. “I have not seen many efficacy-boosting messages, and I think that could be a strong approach for future messaging.”

Chances of Getting COVID-19

The respondents, on average, perceived they had a 30% chance they would contract the virus in the next three months, a 2% increase from survey one.

They perceived they had 36% chance of getting seriously ill from COVID-19 and a 23% chance of dying from it, up 2 and 1%, respectively, from survey one.

The researchers say that although individual risk is difficult to calculate because of differences in people’s choices to social distance, wear protection and their pre-existing conditions, this is an overestimation of COVID-19 risks.

Current data from Johns Hopkins University estimates there is a 97% survival rate for COVID-19. However, the U.S. Centers for Disease Control and Prevention states that people of any age with certain underlying medical conditions are at an increased risk for severe illness from COVID-19.

Will People Get Vaccines?

People intending to get a vaccine decreased from 54 to 46% from the first to second survey.

The main reasons they did not intend to get a vaccine included: vaccine safety, vaccine effectiveness and high potential cost.

Respondents stated that they received most of their COVID-19 information from television if using traditional media and Facebook if using social media.

Qualtrics, a U.S.-based survey company, conducted the surveys through its online panels in which people sign up to take surveys for a fee.

Qualtrics implemented quotas to recruit a sample for each state that is roughly representative of the state’s age, race and ethnicity, and income demographics based on U.S. Census data.

Due to the attrition of about 900 respondents from the first survey of more than 3,000 individuals, there was a higher proportion of young, white, female respondents relative to census demographics for each state.

The group will distribute the third survey in October, and the subsequent report will be available at the group’s website, where the survey one report can also be found.