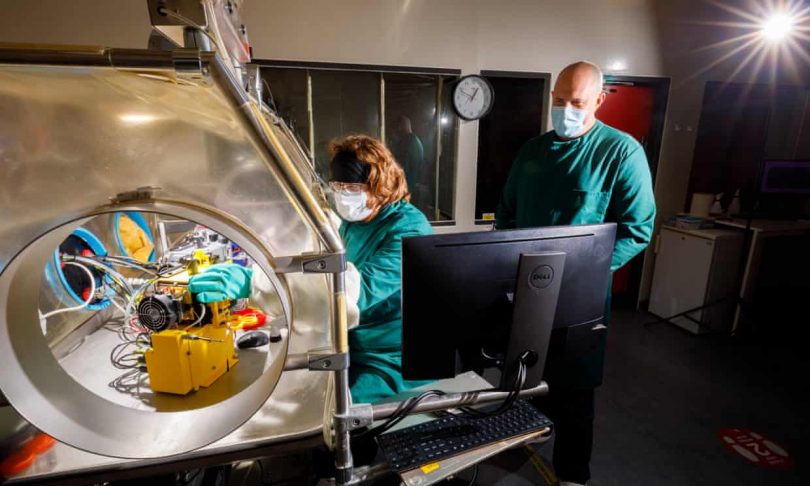 It is the question scientists around the world are trying to answer: how long can the coronavirus survive in the tiny aerosol particles we exhale? In a high-security lab near Bristol, entered through a series of airlock doors, scientists may be weeks from finding out.

On Monday, they will start launching tiny droplets of live Sars-CoV-2 and levitating them between two electric rings to test how long the airborne virus remains infectious under different environmental conditions.

“It is a very important question,” said Prof Denis Doorly, an expert in fluid mechanics at Imperial College London, who is not involved in the research. “There is now huge interest in what it could take to mitigate the risk of infection in enclosed spaces, in terms of enhanced natural ventilation, or air-scrubbing systems, or UV-C lighting – but this all depends on knowing how much viable virus remains suspended in the air.”

Until now, it has been expected that Covid-19 is predominantly transmitted in respiratory droplets, produced when an infected person coughs, sneezes, sings, talks or breathes. These rapidly fall to the ground, providing the logic behind the 2-metre rule.

Yet among experts, there is a growing consensus that the virus may linger in smaller droplets called aerosols, which may be carried over greater distances in air currents and accumulate in poorly ventilated spaces. This suspicion is largely based on outbreaks in restaurants and choirs, where people have contracted the virus despite being some distance from the infected person.

Genetic material from the virus has also been detected in air samples from poorly ventilated rooms, such as hospital toilets – but no one has yet identified live infectious virus in air samples, said Prof Jonathan Reid at the University of Bristol, who is leading the new research. “We know that when bacteria or viruses become airborne in respiratory droplets they very quickly dry down and can lose viability, so that’s an important step to understand when assessing the role of airborne transmission in Covid-19.”

For decades, scientists have used sealed vessels called Goldberg drums to investigate how long viruses can survive in aerosol droplets. The virus is sprayed into the drum, which rotates to keep the droplets airborne, and samples are removed at regular intervals and tested for live virus. Using this method, US researchers have estimated that Sars-CoV-2 has an aerosol half-life of 1.1-1.2 hours – meaning half the particles drop out of the air after this time – and infectious virus could still be detected after three hours, when the experiment was ended.

Yet these estimates are imprecise, because of the length of time it takes to spray the virus into the drum, and the large amount of fluid used, which does not accurately replicate what happens when we cough or breathe.

Instead, the Bristol researchers have developed apparatus that allows them to generate any number of tiny, virus-containing particles – invisible to the naked eye – and gently levitate them between two electric rings for anything from seconds, to hours, to days. The temperature, humidity and UV light intensity of the surrounding air is tightly controlled and can be manipulated to replicate various real-world scenarios.

“We can effectively mimic a cold, wet British winter – or even a hot, dry summer in Saudi Arabia – to look at how these dramatic differences in environmental conditions affect how long the virus remains infectious while suspended in air,” said Allen Haddrell, the University of Bristol chemist who designed and built the apparatus, called Celebs (controlled electromagnetic levitation and extraction of bioaerosol on to a substrate) using 3D printers.

The three Celebs resemble small, brightly coloured robots, and are housed inside a sealed, plastic cabinet, within a containment level-three laboratory, designed to handle germs that cause severe human disease. They have been jokingly named Bumblebee, Megatron and Optimus Prime, after the 1980s Transformers toys – although their purpose is immeasurably more serious. The team is receiving funding from UK Research and Innovation and the National Institute for Healthcare Research, while the US government has also expressed interest in exporting the technology to study other pathogens.

Until now, the team has been practising levitating aerosols containing a mouse coronavirus, which is harmless to humans. Here, they have seen a large drop in infectivity within the first 10 minutes of the virus being suspended. “We’ve also seen that at 10C, this mouse virus survives a lot longer than at warmer temperatures,” Haddrell says.

On Monday they will begin levitating live Sars-CoV-2 for the first time, meaning they could have initial results by the end of the week. These will be made available to policymakers and submitted for peer review in scientific journals, Reid said.

“I think the science is fine, and will show the principle that you can modify the environment to reduce the survivability of the virus. But the applicability might be tricky, depending on the environmental factors they identify,” warned Dr Julian Tang, a consultant virologist at Leicester Royal Infirmary. “You’re not going to sit in a theatre or cinema if the temperature is 35C and the humidity is 80%.”