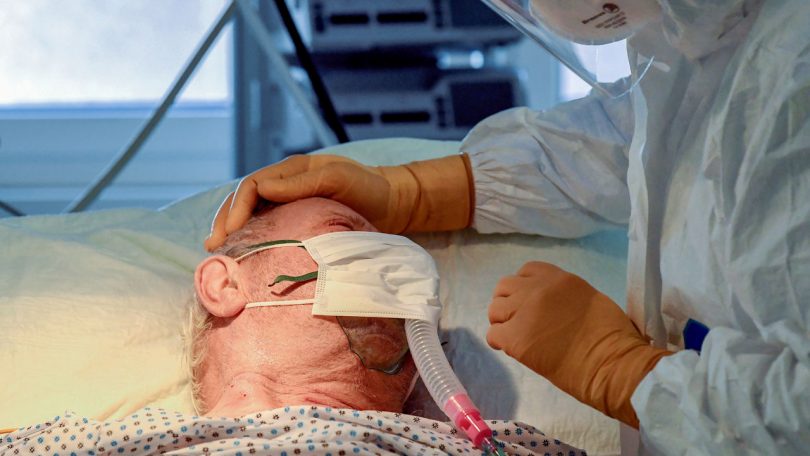 From the first months of the COVID-19 pandemic, scientists baffled by the disease’s ferocity have wondered whether the body’s vanguard virus fighter, a molecular messenger called type I interferon, is missing in action in some severe cases. Two papers published online in Science this week confirm that suspicion. They reveal that in a significant minority of patients with serious COVID-19, the interferon response has been crippled by genetic flaws or by rogue antibodies that attack interferon itself.

“Together these two papers explain nearly 14% of severe COVID-19 cases. That is quite amazing,” says Qiang Pan- Hammarström, an immunologist at the Karolinska Institute.

Tadatsugu Taniguchi, a pioneering interferon scientist and emeritus professor at the University of Tokyo, calls the discoveries “remarkable.” He says they highlight the “critical” role of type I interferons in SARS-CoV-2 infection and the development of potentially lethal COVID-19.

Co-author Isabelle Meyts, a pediatric immunologist at the University Hospitals Leuven, was struck by one paper’s finding that rogue antibodies underlie COVID-19 in 10% of gravely ill patients: “There has never been any infectious disease explained at this level by a factor in the human body. And it’s not an isolated cohort of Europeans. Patients are from all over the world, all ethnicities.” Another finding, that 94% of the patients with interferon-attacking antibodies were male, also helps explain why men face higher risk of severe disease.

The paired studies have immediate practical implications. Synthetic interferons, long used to treat other diseases, might help some at-risk patients, as might other therapies aimed at removing the damaging antibodies. A common kind of antibody test could be readily developed and return answers in hours. Those found to be at high risk of developing severe COVID- 19 could take precautions to avoid exposure or be prioritized for vaccination, says Elina Zuniga, an immunologist who studies interferons at the University of California, San Diego.

The findings also raise a red flag for plasma donations from recovered patients. Because it may be rich in antibodies to the virus, “convalescent plasma” is already given to some patients to fight the infection. But some donations could harbor the interferon-neutralizing antibodies. “You should eliminate these patients from the pool of donors,” Zuniga says. “You definitely don’t want to be transferring these autoantibodies into another person.”

Type I interferons are made by every cell in the body and are vital leaders of the antiviral battle early in infection. They launch an immediate, intense local response when a virus invades a cell, triggering infected cells to produce proteins that attack the virus. They also summon immune cells to the site and alert uninfected neighboring cells to prepare their own defenses.

In one study, Jean-Laurent Casanova, an infectious disease geneticist at Rockefeller University, and his team examined blood samples from 987 gravely ill patients from around the world. In 10.2% of the patients, the researchers identified antibodies that attacked and neutralized the patients’ own type I interferon. A subgroup of affected patients had extremely low or undetectable blood levels of this interferon. Lab studies confirmed the antibodies knocked the interferon out of action and cells exposed to the patients’ plasma failed to fend off invasion by the new coronavirus.

None of the 663 people in a control group with mild or asymptomatic SARS-CoV-2 infection had those damaging antibodies. The antibodies were also scarce in the general population, showing up in only 0.33% of more than 1200 healthy people tested. “What this means is that at least 10% of critical COVID-19 is an autoimmune attack against the immune system itself,” Casanova says.

The preponderance of male patients was a surprise, because women have higher rates of autoimmune disease. “Our favorite hypothesis is that it is an X-linked recessive trait,” Casanova says. “Women with two X chromosomes are protected and men, with one, are not.” Supporting that suspicion, one woman with a rare condition that silences one X chromosome was among the severely ill patients with autoantibodies.

If these striking results hold up, they might also help explain the increased vulnerability of older people to severe COVID-19: Half the gravely ill patients with autoantibodies were older than 65.

The second paper found genetic flaws in patients that led to the same end result: a grossly inadequate interferon response to SARS-CoV-2 infection. The team sequenced DNA from 659 critically ill COVID-19 patients and from 534 controls with mild or asymptomatic disease. They examined 13 genes, chosen because flaws in them impair the body’s production or use of type I interferon; mutations in the genes underlie life-threatening influenza or other viral illnesses. The researchers found that 3.5% of the critically ill patients harbored rare mutations in eight of those genes. In patients for whom blood samples were available, interferon levels were vanishingly small. No members of the control group carried any of the mutations. “This is the first paper to pin down indisputably disease-causing mutations underlying severe COVID-19,” Pan-Hammarström says.

But it’s “probably the tip of the iceberg,” says Paul Hertzog, an interferon expert at the Hudson Institute of Medical Research. Many other damaging mutations, interferon related and not, may influence the development of severe COVID-19, he says.

Zuniga notes that none of the patients who made antibodies against interferon or had the mutations had a history of life-threatening viral illnesses requiring hospitalization. “This suggests that we are more reliant on type I interferons to protect ourselves against SARS-CoV-2 versus other viral infections,” she says. “That makes it important to try therapies aimed at boosting type I interferon responses.”

Dozens of randomized clinical trials are now deploying interferons against SARS-CoV-2. One, led by Tom Wilkinson at the University of Southampton, reported promising findings in a small group of hospitalized COVID-19 patients. But synthetic interferons won’t help patients who harbor mutations that prevent interferons from working, or those with antibodies that attack them.

Some researchers caution that the interferon-neutralizing antibodies could be a consequence, rather than a cause, of severe COVID-19. “It’s possible that they develop during the disease,” says Miriam Merad, an immunologist at the Icahn School of Medicine at Mount Sinai. That would explain why the patients hadn’t faced life-threatening viral infections before, she says.

But Casanova, who has made a career of discovering mutations that confer susceptibility to infectious diseases, says there is a strong case for causality. He points out that preexisting blood samples from a handful of patients showed they had the antibodies in their blood before contracting SARS-CoV-2. He argues that, in response to infection, it’s unlikely that the body could quickly generate the high levels of anti-interferon antibodies his team saw.

Yanick Crow, a clinical geneticist at the University of Edinburgh who studies interferon signaling, calls the antibody paper “shocking,” in part because men were so much more likely than women to carry the rogue antibodies. Tests screening for the antibodies can and should be rapidly developed, he says, and will quickly reveal whether the new findings hold up. Given tens of millions of cases worldwide, he says, “10% is such a high figure and the implications are very important.”