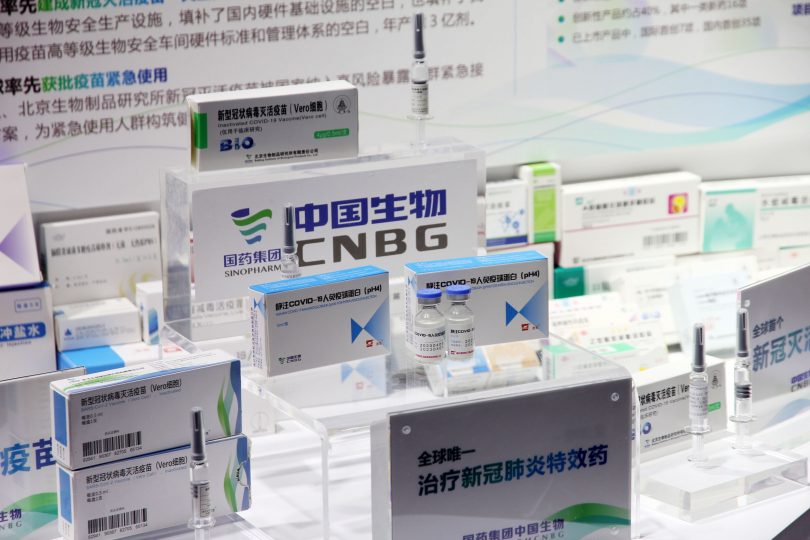 In the race to develop a vaccine for the coronavirus, one deadline has been defined with a precision that, if not scientific, has the clarity of an equation: the first Tuesday in November. Throughout the fall, Donald Trump has frequently intimated that a vaccine might be approved before the election. The President may turn out to be correct, although the product that’s most likely to beat November 3rd is called Xinxing Guanzhuang Bingdu Miehuo Yimiao (Vero Xibao).

“Chinese officials are thinking that Donald Trump might approve a U.S. vaccine before the election,” Yiwu He, the chief innovation officer at the University of Hong Kong, who has many years of experience in vaccine development in China, told me recently. “So their goal is to have a vaccine approved before that.” He expects that China National Biotec Group, or C.N.B.G., a Beijing-based pharmaceutical company that is the country’s largest vaccine manufacturer, will announce some level of approval for a coronavirus vaccine in October. A Beijing-based biotech investor told me that C.N.B.G., having neared the end of Phase III trials with two different versions of its vaccine, is currently filing application materials with China’s regulatory commission. In normal times, approval could take between six months and a year, but people in the industry told me that the process will be accelerated because of pressures related to both the pandemic and politics. (C.N.B.G. did not respond to a request for comment.)

In the meantime, many Chinese citizens haven’t waited for full approval before getting injected. The state press has reported that hundreds of thousands have already been vaccinated by C.N.B.G., under an emergency-use approval granted by the government. The volunteers include many government officials and pharmaceutical executives who received the two-stage vaccination. “I know a few government officials personally, and they told me that they took the vaccine,” Yiwu He said. “It’s middle-level officials—vice-ministers, mayors, vice-mayors.” He estimated that more than a hundred Communist Party cadres roughly at the level of juzhang, or director, have been vaccinated, along with many executives at C.N.B.G. and its parent company, Sinopharm, which is the largest pharmaceutical firm in China. “Every senior executive in Sinopharm and C.N.B.G. has been vaccinated,” He said, “including the C.E.O. of Sinopharm, the chairman of the board, every vice-president—everyone.”

For people in the United States and Europe, the idea of so many Chinese being vaccinated prior to full approval is shocking. “In the West, it would be considered anti-science,” He told me. “But in China it’s viewed very positively.” He described it as a way for officials and executives to show confidence, and he said that, having worked with C.N.B.G. in the past, he has been offered the vaccine himself. At the university, though He is currently coördinating with investors in the hopes of establishing a manufacturing plant for a different vaccine in Hong Kong, he said that he would take the C.N.B.G. vaccine now if it were offered locally. “But I can’t travel to China without a fourteen-day quarantine.”

These days, when I talk to people in the Chinese pharmaceutical and medical industries, I always ask, “Have you been vaccinated?” Especially in Beijing and Shanghai, it’s not unusual for somebody in the field to have had access to a vaccine from either C.N.B.G. or CanSino, another Chinese company that is also conducting Phase III trials. Jiang Xilin, a Shanghai native currently studying genomic medicine and statistics at Oxford University, told me that he has arranged for a vaccination when he returns to China during the winter school break. The Beijing biotech investor said that he will probably wait another month before he takes his first dose. He considers himself to be conservative, and he isn’t travelling much, so he doesn’t see any reason to rush. But many of his friends and colleagues have already been vaccinated. “Some of these friends used to work at Sinopharm, and they’ve seen people they trust at the company vaccinate themselves,” he said, explaining that such individuals would have early access to clinical results. The investor didn’t find this inappropriate, because participation was voluntary. He pointed out that Gu Fangzhou, the scientist who developed China’s first live polio vaccine, in 1960, had administered it to his infant son before mass trials were carried out. In the United States, Jonas Salk had done the same thing with his own polio vaccine. At the University of Pittsburgh, Salk’s wife and three sons were voluntarily injected in 1953, two years before the vaccine was declared to be safe and effective.

A thirty-four-year-old in Beijing told me that he was offered the C.N.B.G. vaccine because his company engaged in business with Sinopharm. This seems to be a uniquely Chinese addition to the Pittsburgh model—from what I can tell, there’s nothing on the historical record about Jonas Salk building guanxi dose by dose. But, to the young man in Beijing, the offer was appealing for a couple of reasons. “I studied the results online from their Phase II trial, and they looked good,” he said, in a phone interview. “And I wanted to help the country.” He received his first dose in June and then another, twenty-eight days later, in July. He experienced no reactions or side effects, and he said that the main warnings were to avoid spicy foods and alcohol on the evening of injection. He signed a waiver agreeing not to speak publicly about the trial. “They told me that it should be effective for six months and maybe longer,” he said. “They don’t know how long it lasts, but from the early reports it looks like it might be something that you take once a year.”

In China, such participants might contribute to useful data about side effects, but they won’t reveal much about the vaccine’s efficacy, given that the country has largely eliminated covid-19 cases since the spring. As a result, C.N.B.G. had to go far from home in order to carry out a Phase III trial. The company enrolled more than fifty thousand subjects in the United Arab Emirates, Peru, and other countries in South America and the Middle East that are currently suffering outbreaks. Earlier this month, Nawal al-Kaabi, the head of the U.A.E.’s covid-19 Clinical Management Committee, said that, of thirty-one thousand volunteers who took the Chinese vaccine, none experienced serious side effects. On September 14th, the U.A.E. announced emergency approval of the vaccine for at-risk professions. C.N.B.G. is the first coronavirus-vaccine manufacturer to receive approval for use in a foreign country.

That’s something else to understand about the Chinese push for a vaccine: this is not Russia. While Russian efforts to fast-track a vaccine have been met with widespread skepticism, people in the field take Chinese technology and professionalism seriously. After a series of vaccine-related scandals in the twenty-tens, China tightened regulations, and the standards for a Phase III trial are similar to those in the United States. During the last decade, China joined the International Council for Harmonisation, a pharmaceutical-regulatory organization with strict requirements. C.N.B.G. is a state-owned company, and, in recent years, it has produced nearly eighty per cent of China’s vaccines; it has received almost unlimited government support in its current project. It has also benefitted from a history of international collaboration. In the twenty-tens, the Gates Foundation chose C.N.B.G. as a partner in its effort to eradicate polio around the world. The foundation provided grants and technical assistance to help C.N.B.G. develop a polio-vaccine production line that was capable of exporting at scale. Yiwu He, who served as a deputy director at the Gates Foundation before taking his current position at the University of Hong Kong, told me that he personally escorted Bill Gates on a tour of C.N.B.G. facilities—a detail that is certain to delight conspiracy theorists if the Chinese firm indeed beats the American election.

The scale of that polio project helped prepare C.N.B.G. for its work on covid-19, and some of the new project’s global orientation is also similar: increasingly, China seems to be looking toward the developing world. In China, there has never been an expectation that the country will produce a coronavirus vaccine for the West, or that anything discovered in the West will be made quickly available to the Chinese. Back in May, when I spoke with an epidemiologist in Shanghai, he explained that tensions between the U.S. and China had led to a stark sense of self-reliance. “If you talk to general health-care professionals in this country, they don’t believe that any vaccine developed in the U.S. will be used here,” he said. “The first priority will be in the U.S., and then they will prioritize U.S. allies, then Africa and other places. China will be at the bottom of the list.”

This mind-set has helped drive Chinese competitiveness, along with the country’s somewhat grim head start on vaccine development. “The reason we are a little ahead is that we had the pandemic earlier,” the Beijing biotech investor told me. China’s initial mishandling of the pandemic, when officials in Wuhan tried to cover up reports of the virus and punished whistle-blowers, is also part of the dynamic. The country initially tried to improve its image through “mask diplomacy,” but this attempt backfired when some of the P.P.E. and other equipment donated to other countries turned out to be substandard. A Shanghai-based biotech entrepreneur told me that vaccine exports should be easier to monitor. “I still think that ninety-seven per cent was of good quality, but there were some unscrupulous merchants,” he said, of the earlier donations. “The good thing is that vaccine sourcing is much tighter.”

Yiwu He agreed that officials see a vaccine as a way to undo some of the diplomatic damage. “All of these feelings can turn around quickly,” he said. “I think that once China has a vaccine, and if they can help other countries, it can make a huge difference.” In his opinion, other Asian countries are already less inclined to blame China for the pandemic, and he thought that other regions, such as Africa and the Middle East, could follow. During the coming months, this could be the new equation: If China is the first to produce an effective vaccine, and if it can offer support at scale to other countries, what will be the diplomatic outcome?