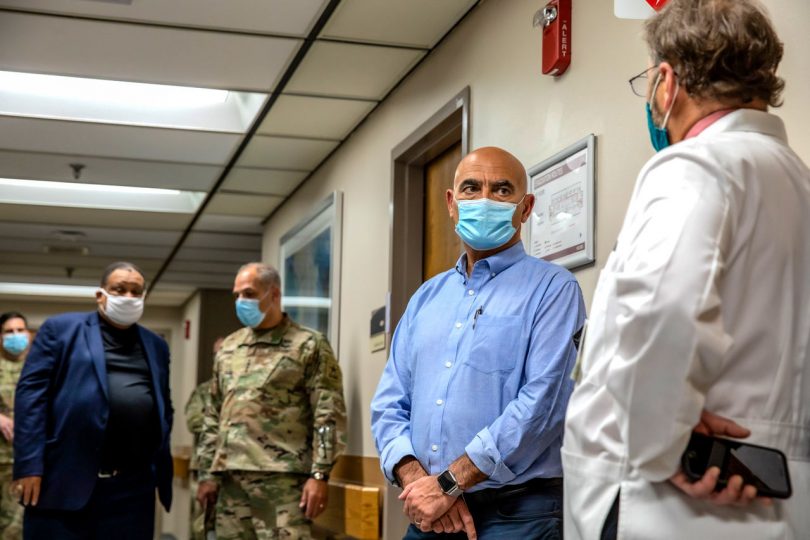 CINCINNATI—A hospital at the University of Cincinnati (UC) sits on a street named after Albert Sabin, who famously developed a vaccine against polio that has helped rid most of the world of this once widely feared disease. A unit at the hospital now has a similarly ambitious goal as it participates in the U.S. effort to find a vaccine against COVID-19. Last week, on 25 September, the leaders of Operation Warp Speed—the Trump administration program that has committed $10 billion to this vision—flew in from Washington, D.C., for a tour. After learning that the hospital had in about 3 weeks enrolled 130 participants in the multisite phase III efficacy trial of one experimental vaccine, the first question Warp Speed’s scientific director, Moncef Slaoui, asked was, “Do you have a good representation of diverse populations?”

This was one several recent visits to trial sites and vaccine manufacturing plants by Slaoui and his Warp Speed co-leader, Gen. Gustave Perna. The four-star general had on his camouflaged Army uniform and combat boots, but Slaoui, who formerly headed the vaccine division of GlaxoSmithKline (GSK), wore casual slacks, an open-collared shirt, and penny loafers without socks. He aimed to put people at ease on the tour, encouraging them to discuss uncomfortable, even taboo, topics—race, politics, regulations, and risks. Perna made small talk with the clinical staff, but largely kept to himself.

The nationwide efficacy trial, which compares a COVID-19 vaccine made by Moderna with a placebo, struggled at first to enroll Black and Latino participants, in part because the contract research organizations that make up three-fourths of the nearly 100 trial sites had few contacts with those communities. But the UC site and others at academic centers, which are part of the COVID-19 Prevention Trials Network (CoVPN) organized by the U.S. National Institute of Allergy and Infectious Diseases (NIAID), have a long history of working with minority communities to recruit participants for clinical trials. And the clinicians running this UC site explained to Slaoui that about half of their enrolled participants in the Moderna trial are either Black or Latino, a close match to the city’s breakdown. (According to the U.S. Census Bureau, Cincinnati’s 300,000 residents are 50% white, 43% African American/Black, and nearly 4% Hispanic/Latino.)

Moderna tracks—and makes public—the demographics of the enrolled participants week by week. During the week before UC started its enrollment for the 30,000-person trial, participants recruited by the other sites were 67% white and only 9% Black/African American and 17% Latino/Hispanic. Carl Fichtenbaum, a co–principal investigator at the UC site, at a 1 September conference call with fellow CoVPN investigators, NIAID Director Anthony Fauci, and Surgeon General Jerome Adams suggested sites put a cap on the number of white participants they could recruit. “I asked the question, ‘What is more important, getting to 30,000 as fast as we can or ensuring the trial is representative of our country and the pandemic?’” Fichtenbaum recalls. The cap was instituted, and for the week of 21 September, enrollees at all Moderna trial sites were 42% Latino/Hispanic, 30% Black/African American, and 7% white. Cumulatively, as of the day of the Warp Speed leaders’ visit to UC, 31% of 27,232 participants in the Moderna trial were from “diverse communities.”

The UC team says its recipe for successful minority participation includes relying on trial recruiters from diverse communities, ads that reach out to those groups specifically, and Spanish speakers who are on the clinical team. “We understand the history of Cincinnati—and the history of the problems of our city and the lack of inclusion,” Fichtenbaum says. The hospital, he stresses, not only has long treated the “underserved,” but has “embedded roots.”

Margaret Powers-Fletcher, co–principal investigator at the UC vaccine site, noted that many misunderstandings circle around the Moderna vaccine. On one extreme, Powers-Fletcher was asked whether the vaccine was bankrolled by Bill Gates as an attempt to microchip the population. But, more commonly, people want to know about Moderna’s unusual vaccine technology. The vaccine contains messenger RNA (mRNA), which codes for the surface protein of the virus that causes COVID-19. Explaining this “opens the door” for a deeper conversation, she says. “It gives us the opportunity to not only talk about what mRNA is, but to dispel other myths associated with vaccine.”

Slaoui adds that having diversity in the trials will build “engagement and trust” that translates into wider use of a COVID-19 vaccine that ultimately gets approved. “The vaccine that stays on the shelf, if people are not accepting it, is of no use,” he says.

O’dell Moreno Owens, a Black clinician who heads the Cincinnati-based nonprofit Interact for Health, joined the tour and raised several provocative concerns. One is that Warp Speed now supports efficacy trials of four different COVID-19 vaccines, and the public sometimes has difficulty separating them. A few weeks ago, an international trial of a COVID-19 vaccine candidate made by AstraZeneca and the University of Oxford was put on hold after a serious side effect occurred in a recipient. (Regulators in the United Kingdom and Brazil determined this wasn’t connected to the vaccine and allowed the trials there to resume, but the United States has yet to follow suit.) “The ripple effect in the community was, ‘I told you so, I told you so,’” Owens says. “That’s going to be a big issue.”

“It is a real challenge to be able to communicate about these vaccines and their safety and engaging people to use them. It’s exacerbated by all the lights that are on this,” Slaoui replies. “Unfortunately, the world we live in, this period of time and all the politics around it exacerbates the anxiety that exists.”

Jaasiel Chapman, the trial’s community liaison for the Black community and a native of the city, says there’s no escaping the divisiveness. “People feel like this pandemic has become so politicized and that people want to win elections, rather than save our lives—that’s definitely one thing that we have gotten out in the community,” he says. “They feel the government has never cared about us before, so now they’re just trying to rush through a vaccine to kill us. So that’s been difficult. There are a lot of doubts in the community.”

Much as Slaoui would like to sidestep the politics, they have cast a shadow over him, too. On 25 September, the day of the UC tour, he issued a video that lambasted Senator Elizabeth Warren (D–MA) for suggesting at a Senate hearing that he had conflicts of interest because of his investments in companies making COVID-19 vaccines. “You don’t know me personally and you are publicly accusing me of being greedy, of being corrupt, and of doing this to enrich myself,” seethed Slaoui, who was unusually named to co-lead Warp Speed as a government contractor, not as a federal employee. Sitting at a desk with a Warp Speed logo behind him, Slaoui stressed that he had gone to great lengths to separate his finances from the vaccine effort, only holding on to GSK stock because they are his nest egg for retirement. “I cannot make any benefit from taking this role and my commitment is to helping the American people fight this epidemic. It is mathematically impossible for me to enrich myself,” he said. “I didn’t hesitate to join the role even though I’m a registered Democrat because this pandemic is bigger than any one of us. It’s bigger than me and it’s bigger than you. Please stop distracting me and Operation Warp Speed.”

Warp Speed’s main vaccine concern, as Slaoui repeatedly stressed during the UC visit, was safety. Cincinnati physician James Powell, who heads a project for the National Medical Association—which represents Black physicians and patients—to increase minority awareness about participating in clinical trials shared this worry. He told Slaoui he’s particularly concerned about safety when a vaccine moves from a 30,000-person trial to millions of people in the real world.

Slaoui says that to best balance potential benefits versus risks the vaccines will at first go into people at the highest risk of severe disease. He also endorsed a push by the U.S. Food and Drug Administration (FDA)—which the Trump administration is reportedly challenging—to add a safety measure to vaccine approvals that could slow down the process. Independent boards that monitor the vaccine trials take scheduled looks at the data, and if they see an efficacy signal or dangerous side effects, they can recommend stopping a trial early. An early sign of efficacy, in turn, could lead manufacturers to seek what’s known as an emergency use authorization (EUA).

There is widespread concern that politics might influence the issuance of a vaccine EUA, because critics say President Donald Trump and his allies pushed too aggressively for similar authorizations for two unproven COVID-19 treatments, hydroxychloroquine and convalescent plasma. Although Slaoui and other scientific advisers to the administration have said it’s highly unlikely a vaccine candidate will prove safe and effective in October, before the 3 November presidential election, Trump has repeatedly floated the idea that such proof is imminent. FDA officials have insisted that politics will not influence their decisions, and they recently proposed a regulation that would not consider an EUA until at least 2 months after the last participant in a trial is fully vaccinated.

Near the end of the visit, Powell asks how many Black investigators are taking part in the Warp Speed trials and how many sites are at historically black colleges and universities (HBCUs).

“The answer is, ‘Not enough,’” Slaoui says. (Two HBCU presidents recently joined COVID-19 vaccine trials and called for their students and faculty to participate, too, but the request also produced some backlash.)

As he says his goodbyes, Slaoui praises the people who participate in the COVID-19 vaccine trials. “It’s a very generous act.” And he laments what he called the “unintended consequence of the communication that’s happening on the political side of things,” which he says was “making people afraid of vaccines.”

“The only way to counter that is to be transparent and explain,” Slaoui says. “And we need everybody’s help. So thank you very much for being here.”