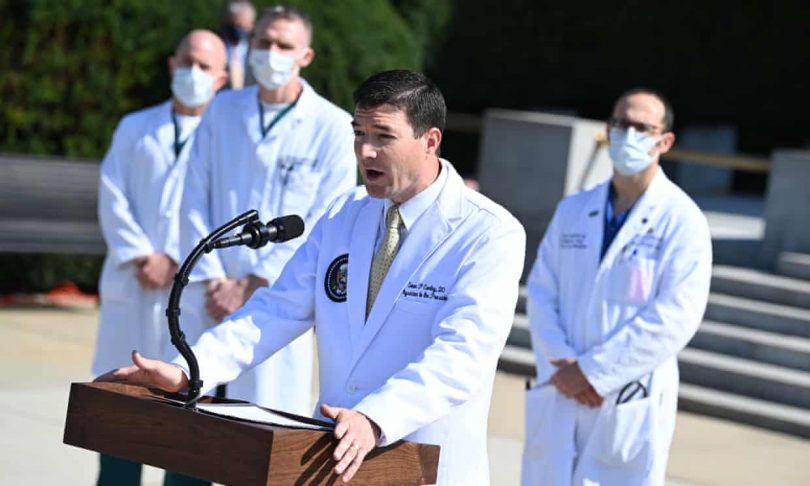 The latest intervention from Donald Trump’s medical team has been to put the president on dexamethasone, a steroid that is proven, thanks to the UK’s Recovery trial, to benefit Covid-19 patients who are having breathing difficulties.

But the decision to administer the steroid now has only added to the confusion surrounding the president’s state of health. Normally, dexamethasone is reserved for patients who have been ill for at least a week and whose oxygen levels are low.

Peter Openshaw, a professor of experimental medicine at Imperial College London, and a member of the UK government’s New and Emerging Respiratory Virus Threats Advisory Group, said: “It would be unusual to be starting steroids with a relatively short duration of illness. It’s normally reserved for people who have had symptoms for a week or more and who are going into respiratory failure.”

Doctors said on Sunday that on Friday and Saturday Trump’s oxygen saturation levels had twice dipped below 94% – the usual range being 95 to 100%. But in answer to a question about whether the level ever fell below 90%, the White House physician, Sean Conley, said it had never reached the low 80s.

The update has prompted concerns among some doctors about the president’s condition. Nicholas Christakis, a physician and sociologist at Yale University, said “Either he is sicker than they have let on and clearly warrants dexamethasone, or he’s not so sick, and therefore putting him on dexamethasone is irresponsible.”

The Recovery trial found that the drug improved survival chances and shortened hospital stays among patients with blood oxygen levels low enough to need treatment with oxygen, and worked better still in patients who required ventilation.

The update came a day after Trump posted a buoyant video from the Walter Reed National Military Medical Center in Maryland on Saturday in which he seemed eager to return to the fray, and the White House, in the run-up to the coming election.

Trump may have looked a little paler than usual, but he did not seem overly fatigued, his breath was not laboured, and there was no new cough in evidence. But while the president declared he was “feeling much better” than when admitted on Friday, he conceded that the next few days were “the real test”.

There is a pattern to Covid-19 that doctors have learned since the pandemic first spilled out of China and swept around the world. Patients who develop symptoms typically have them mildly for a week or so: a fever, headaches, the cough, perhaps a loss of taste or smell. The crunch point comes later, around day eight to 10. That is when it becomes clearer whether the patient has got on top of the infection, or the virus has reached deep into the lungs and triggered an excessive inflammatory reaction that can overwhelm them.

Conflicting messages from Trump’s doctors and the White House chief of staff, Mark Meadows, had already sowed confusion about when the president first tested positive and the timeline of his medical care since being diagnosed.

Whatever the reality, the crucial period will be the end of the coming week. Trump was reportedly given supplemental oxygen at the White House before being moved to hospital, a sign the virus had begun to affect his lungs. On Sunday doctors said his oxygen saturation was at 98%.

Beyond monitoring the president’s vital signs and oxygen levels, doctors will have taken chest X-rays and CT scans to check for damage in the lungs. These, taken on arrival at hospital, along with white blood cell counts, can give doctors an early warning of whether the illness is on course to be severe.

Coronavirus patients have described symptoms coming and going, but two treatments may be helping Trump fight the infection. The FDA approved remdesivir for emergency use in May after studies suggested it helped people recover more quickly. But with remdesivir, timing is crucial. Antivirals are most effective when the infection is ramping up. With Covid-19, the peak in replication happens about the same time that symptoms emerge. Getting in early matters; it is unclear whether the drug is much use if the virus has already done its damage.

The same is true for the experimental cocktail of antibodies that Trump received. Regeneron’s Regn-Cov2 is a blend of two human, but manufactured, antibodies. It works by gumming up the spike proteins that protrude from the viral surface, and which the virus uses to invade human cells. The therapy has yet to be approved, but in trial patients it has reduced the amount of circulating virus.

That should be be good news for recovery, but proof must come from larger trials, which are now afoot in the US and UK. As Martin Landray, a professor of medicine and epidemiology at the University of Oxford, puts it: “They have been too small to know whether they improve patient outcomes such as reducing the duration of hospital stay, reducing the need for mechanical ventilation, or improving survival.”

Trump’s doctors have more options at hand, and if they make an appearance in the week, they could be revealing about the president’s condition. When patients are at risk of blood clots and strokes – a complication seen all too often in the pandemic – doctors administer anti-platelet or perhaps anticoagulant drugs. More experimental, and a surprise if used, is interferon, another unproven experimental treatment that is in trials to see if it can help coordinate a robust immune response.