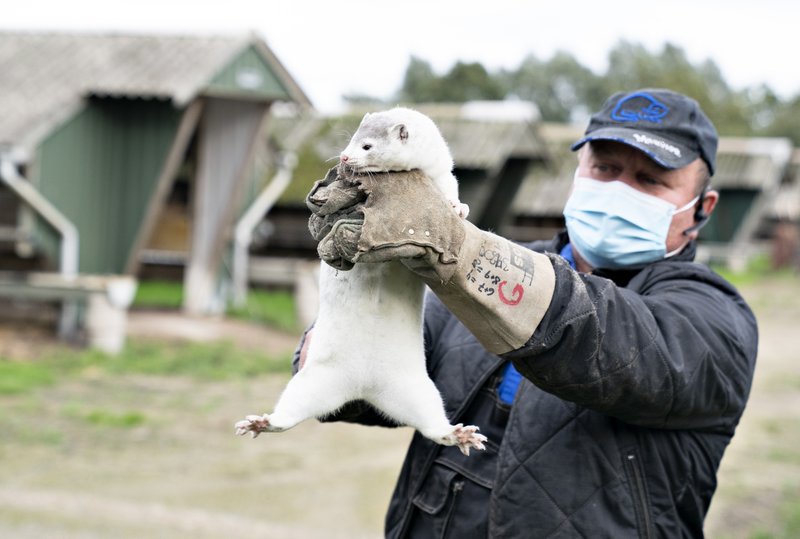 COPENHAGEN, Denmark (AP) — Danish veterinarians and farmers have begun culling at least 2.5 million minks in northern Denmark, authorities said Monday, after coronavirus has been reported in at least 63 farms.

The Danish Veterinary and Food Administration is handling the culling of the infected animals while breeders who have non-infected animals on a farm within 8 kilometers (5 miles) of an infected farm must put them to sleep themselves, said Flemming Kure Marker of the government agency.

”We are moving forward, we are getting it done,” he said of the culling that started Thursday in the village of Gjoel, west of Aalborg, adding it could last months, depending on the spread of the virus.

There was no immediate figures on how many animals have already been killed.

On Friday, a mink farmer refused to let authorities enter his farm to cull the animals and a padlock had to been cut, police spokesman Henrik Skals told The Associated Press. Over the weekend, a handful of protesters were removed outside two mink farms, he added.

The administration said breeders with non-infected minks will get 100% compensation while those with infected animals will receive less as an incentive for farmers to keep the infection out of their herds.

Denmark is among the largest mink exporters in the world and produces an estimate 17 million furs per year. Kopenhagen Fur, a cooperative of 1,500 Danish breeders, accounts for 40% of the global mink production. Most of its exports go to China and Hong Kong.

The coronavirus pandemic could “threaten the entire profession,” said Tage Pedersen, chairman of Danish Fur Breeders Association. “All breeders are right now in a huge amount of uncertainty and frustration over this ‘meteor’ that has fallen on our heads.”

Scientists are still digging into how the minks got infected and if they can spread it to people. Some may have gotten the virus from infected workers. Dutch authorities say some farm workers later caught the virus back from the minks.

In August, the Netherlands brought forward the mandatory end of mink farming by three years to 2021 amid a growing number of coronavirus infections at fur farms.

In Poland, another large mink fur exporter, the ruling right-wing coalition and the opposition are deeply divided over a new law that would ban fur farms. Opponents say the law will destroy the livelihoods of hundreds of fur farmers.