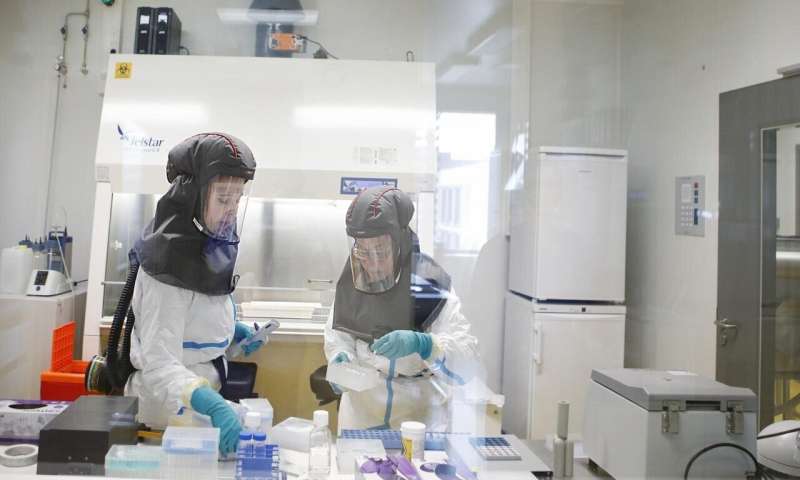 Virologists at the KU Leuven Rega Institute have been working on two lines of SARS-CoV-2 research: searching for a vaccine to prevent infection, and testing existing drugs to see which one can reduce the amount of virus in infected people.

To test the efficacy of the vaccine and antivirals preclinically, the researchers use hamsters. The rodents are particularly suitable for SARS-CoV-2 research because the virus replicates itself strongly in hamsters after infection. Moreover, hamsters develop a lung pathology similar to mild COVID-19 in humans. This is not the case with mice, for example.

For this study, the team of Suzanne Kaptein (Ph.D.), Joana Rocha-Pereira (Ph.D.), Professor Leen Delang, and Professor Johan Neyts gave the hamsters either hydroxychloroquine or favipiravir—a broad-spectrum antiviral drug used in Japan to treat influenza—for four to five days. They tested several doses of favipiravir. The hamsters were infected with the SARS-CoV-2 virus in two ways: by inserting a high dose of virus directly into their noses or by putting a healthy hamster in a cage with an infected hamster. Drug treatment was started one hour before the direct infection or one day before the exposure to an infected hamster. Four days after infection or exposure, the researchers measured how much of the virus was present in the hamsters.

Treatment with hydroxychloroquine had no impact: the virus levels did not decrease and the hamsters were still infectious. “Despite the lack of clear evidence in animal models or clinical studies, many COVID-19 patients have already been treated with hydroxychloroquine,” explains Joana Rocha-Pereira. “Based on these results and the results of other teams, we advise against further exploring the use of hydroxychloroquine as a treatment against COVID-19.”

A high dose of favipiravir, however, had a potent effect. A few days after the infection, the virologists detected hardly any infectious virus particles in the hamsters that received this dose and that had been infected intranasally. Moreover, hamsters that were in a cage with an infected hamster and had been given the drug did not develop an obvious infection. Those that had not received the drug all became infected after having shared a cage with an infected hamster.

A low dose of the drug favipiravir did not have this outcome. “Other studies that used a lower dose had similar results,” Professor Delang notes. “The high dose is what makes the difference. That’s important to know, because several clinical trials have already been set up to test favipiravir on humans.”

The researchers are cautiously optimistic about favipiravir. “Because we administered the drug shortly before exposing the hamsters to the virus, we could establish that the medicine can also be used prophylactically, so in prevention,” Suzanne Kaptein notes.

“If further research shows that the results are the same in humans, the drug could be used right after someone from a high-risk group has come into contact with an infected person. It may likely also be active during the early stages of the disease.”

General preventive use is probably not an option, however, because it is not known whether long-term use, especially at a high dose, has side effects.

Further research will have to determine whether humans can tolerate a high dose of favipiravir. “In the hamsters, we detected hardly any side effects,” says Delang. In the past, the drug has already been prescribed in high doses to Ebola patients, who appear to have tolerated it well.

“Favipiravir is not a panacea,” the researchers warn. This flu drug, nor any other drug, has not been specifically developed against coronaviruses. As a result, the potency of favipiravir is to be considered moderate at best.

The study also highlights the importance of using small animals to test therapies against SARS-CoV-2 in vivo. “Our hamster model is ideally suited to identify which new or existing drugs may be considered for clinical studies,” explains Professor Johan Neyts. “In the early days of the pandemic, such a model was not yet available. At that time, the only option was to explore in patients whether or not a drug such as hydroxychloroquine could help them. However, testing treatments on hamsters provides crucial information that can prevent the loss of valuable time and energy with clinical trials on drugs that don’t work.”

Not all research models are equal

Kaptein, Rocha-Pereira, Delang and Neyts recently contributed to a commentary in Nature Communications in which they give additional context to the contradictory messages that have been circulating about (hydroxy)chloroquine. In the early days of the pandemic, several studies were set up to test these drugs in cell cultures. The results suggested that they could have an antiviral effect. As a result, clinical trials were organized to test the drugs on humans. However, cell cultures are not the best proxy for the human body, and no conclusive effect was found in humans.

In their commentary, the authors describe several recent studies on human organ-on-chip and other complex in vitro models, mice, hamsters, and non-human primates. Each of these studies demonstrates that hydroxychloroquine and chloroquine do not have the efficacy suggested by the studies in cell cultures. Therefore, the authors conclude that these malaria drugs are very unlikely to be effective in humans as a COVID-19 treatment.