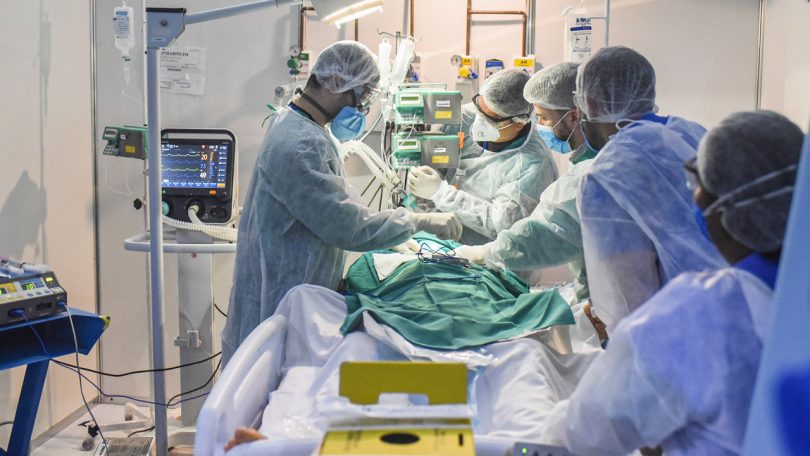 Science’s COVID-19 reporting is supported by the Pulitzer Center and the Heising-Simons Foundation.

It’s one of the pandemic’s puzzles: Most people infected by SARS-CoV-2 never feel sick, whereas others develop serious symptoms or even end up in an intensive care unit clinging to life. Age and preexisting conditions, such as obesity, account for much of the disparity. But geneticists have raced to see whether a person’s DNA also explains why some get hit hard by the coronavirus, and they have uncovered tantalizing leads.

Now, a U.K. group studying more than 2200 COVID-19 patients has pinned down common gene variants that are linked to the most severe cases of the disease, and that point to existing drugs that could be repurposed to help. “It’s really exciting. Each one provides a potential target” for treatment, says genetic epidemiologist Priya Duggal of Johns Hopkins University.

Kenneth Baillie of the University of Edinburgh, an intensive care physician and geneticist, led the new study, which he discussed on 2 October at an online meeting of a data-pooling effort called the COVID-19 Host Genetics Initiative. He’s hoping the results, also posted as a preprint on medRxiv, will speed treatments, although he cautions that any clinical trial inspired by the findings should wait for the study’s acceptance in a peer-reviewed journal. “Because the epidemic is progressing at such an alarming rate, even a few months of time saved will save lots of lives,” Baillie says.

In a standard approach to finding genes that influence a condition, geneticists scan the DNA of large numbers of people for millions of marker sequences, looking for associations between specific markers and cases of the disease. In June, one such genomewide association study in The New England Journal of Medicine (NEJM) found two “hits” linked to respiratory failure in 1600 Italian and Spanish COVID-19 patients: a marker within the ABO gene, which determines a person’s blood type, and a stretch of chromosome 3 that holds a half-dozen genes. Those two links have also emerged in other groups’ data, including some from the DNA testing company 23andMe.

The new study confirmed the chromosome 3 region’s involvement. And because 74% of its patients were so sick that they needed invasive ventilation, it had the statistical strength to reveal other markers, elsewhere in the genome, linked to severe COVID-19. One find is a gene called IFNAR2 that codes for a cell receptor for interferon, a powerful molecular messenger that rallies the immune defenses when a virus invades a cell. A variant of IFNAR2 found in one in four Europeans raised the risk of severe COVID-19 by 30%. Baillie says the IFNAR2 hit is “entirely complementary” to a finding reported in Science last month: very rare mutations that disable IFNAR2 and seven other interferon genes may explain about 4% of severe
COVID-19 cases. Both studies raise hopes for ongoing trials of interferons as a COVID-19 treatment.

A more surprising hit from the U.K. study points to OAS genes, which code for proteins that activate an enzyme that breaks down viral RNA. A change in one of those genes might impair this activation, allowing the virus to flourish. The U.K. data suggest there is a variant as common and influential on COVID-19 as the interferon genetic risk factor.

Other genes identified by Baillie’s team could ramp up the inflammatory responses to lung damage triggered by SARS-CoV-2, reactions that can be lethal to some patients. One, DPP9, codes for an enzyme known to be involved in lung disease; another, TYK2, encodes a signaling protein involved in inflammation. Drugs that target those two genes’ proteins are already in use—inhibitors of DPP9’s enzyme for diabetes and baricitinib, which blocks TYK2’s product, for arthritis. Baricitinib is in early clinical testing for COVID-19, and the new data could push it up the priority list, Baillie says.

The chromosome 3 region still stands out as the most powerful genetic actor: A single copy of the disease-associated variant more than doubles an infected person’s odds of developing severe COVID-19. Evolutionary biologists reported last month in Nature that this suspicious region actually came from Neanderthals, through interbreeding with our species tens of thousands of years ago. It is now found in about 16% of Europeans and 50% of South Asians.

But the specific chromosome 3 gene or genes at play remain elusive. By analyzing gene activity data from normal lung tissue of people with and without the variant, the U.K. team homed in on CCR2, a gene that encodes a receptor for cytokine proteins that play a role in inflammation. But other data discussed at last week’s meeting point to SLC6Z20, which codes for a protein that interacts with the main cell receptor used by SARS-CoV-2 to enter cells. “I don’t think anyone at this point has a clear understanding of what are the underlying genes” for the chromosome 3 link, says Andrea Ganna of the University of Helsinki, who co-leads the COVID-19 Host Genetics Initiative.

The U.K. genetics study did not confirm that the ABO variants affect the odds of severe disease. Some studies looking directly at blood type, not genetic markers, have reported that type O blood protects against COVID-19, whereas A blood makes a person more vulnerable. It may be that blood type influences whether a person gets infected, but not how sick they get, says Stanford University geneticist Manuel Rivas. In any case, O blood offers at best modest protection. “There are a lot of people with O blood that have died of the disease. It doesn’t really help you,” says geneticist Andre Franke of the Christian-Albrecht University of Kiel, a coleader of the NEJM study.

Researchers expect to pin down more COVID-19 risk genes—already, after folding in the U.K. data plumbed by Baillie’s team, the COVID-19 Host Genetics Initiative has found another hit, a gene called FOXP4 implicated in lung cancer. And in a new medRxiv preprint posted last week, the company Ancestry.com reports that a gene previously connected to  the effects of the flu may also boost COVID-19 susceptibility only in men, who are more likely to die of the disease than women.

Geneticists have had little luck so far identifying gene variants that explain why COVID-19 has hit Black people in the United States and United Kingdom particularly hard. The chromosome 3 variant is absent in most people of African ancestry. Researchers suspect that socioeconomic factors and preexisting conditions may better explain the increased risks. But several projects, including Baillie’s, are recruiting more people of non-European backgrounds to bolster their power to find COVID-19 gene links. And in an abstract for an online talk later this month at the American Society of Human Genetics annual meeting, the company Regeneron reports it has found a genome region that may raise the risk of severe disease mainly in people of African ancestry.

Even as more genetic risk factors are identified, their overall effect on infected people will be modest compared with other COVID-19 factors, Duggal says. But studies like the U.K. team’s could help reveal the underlying biology of the disease and inspire better treatments. “I don’t think genetics will lead us out of this. I think genetics may give us new opportunities,” Duggal says.