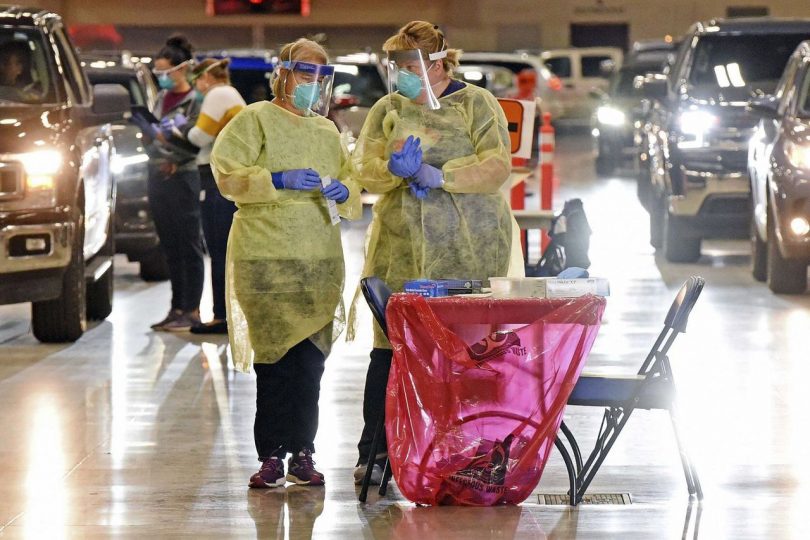 Several Boston-area researchers are among the authors of an open letter published Wednesday evening in the prestigious medical journal The Lancet that criticizes herd immunity as “a dangerous fallacy unsupported by the scientific evidence.”

The letter acknowledges that pandemic restrictions have led to demoralization — and an interest in the idea of herd immunity.

But it says, “The evidence is very clear: controlling community spread of COVID-19 is the best way to protect our societies and economies until safe and effective vaccines and therapeutics arrive within the coming months. We cannot afford distractions that undermine an effective response; it is essential that we act urgently based on the evidence.”

The White House has embraced a declaration — known as The Great Barrington Declaration because it was originally signed in Great Barrington, Massachusetts —by a group of scientists arguing that authorities should allow the coronavirus to spread among young healthy people while protecting the elderly and the vulnerable, The New York Times reported.

The approach suggests that herd immunity, or resistance in the population to the spread of infection, can be achieved through the younger people getting infected, rather than vaccinations.

But experts say achieving herd immunity through natural infections is not, and should never be, a strategy. “Never in the history of public health has herd immunity been used as a strategy for responding to an outbreak,” the head of the World Health Organization, Tedros Adhanom Ghebreyesus, said this week. “Allowing a dangerous virus that we don’t fully understand to run free is simply unethical.”

The letter in The Lancet argues, “Any pandemic management strategy relying upon ‘immunity from natural infections’ for COVID-19 is flawed.”

It recites a litany of problems with the idea. The letter argues that uncontrolled spread among younger people could lead to significant illness and death across the entire population.

It points out “there is no evidence for lasting protective immunity to SARS-CoV-2,” which would mean that the virus could “present a risk to vulnerable populations for the indefinite future.”

“Such a strategy would not lead to the end of COVID-19, but instead result in recurrent epidemics, as was the case with numerous infectious diseases before the advent of vaccination,” the letter says.

The letter also argues that the strategy would place an “unacceptable burden on the economy and healthcare workers,” and it warned that scientists still do not understand the long-lasting effects of COVID-19.

The letter calls instead for “effective measures that suppress and control transmission” and “financial and social programmes that encourage community responses and address the inequities that have been amplified by the pandemic.”

“Continuing restrictions will probably be required in the short term,” the letter says. “The purpose of these restrictions is to effectively suppress SARS-CoV-2 infections to low levels that allow rapid detection of localised outbreaks and rapid response … Protecting our economies is inextricably tied to controlling COVID-19. We must protect our workforce and avoid long-term uncertainty.”

The letter, which had 80 signers as of the day of publication, is part of a growing wave of criticism in recent days of the idea of natural infection-based herd immunity.

The American Public Health Association and 13 other public health groups issued a statement Wednesday, saying that following the Great Barrington Declaration would “haphazardly and unnecessarily” sacrifice lives. The statement called the strategy a political statement that “preys on a frustrated populace … selling false hope that will predictably backfire.”

The strategy is “a fringe component of epidemiology. This is not mainstream science. It’s dangerous. It fits into the political views of certain parts of our confused political establishment,” National Institutes of Health Director Francis Collins told The Washington Post. “I’m sure it will be an idea that someone can wrap themselves in as a justification for skipping wearing masks or social distancing and just doing whatever they damn well please.”

William Haseltine, a former Harvard Medical School professor and founder of the university’s cancer and HIV/AIDS research departments, told CNN, “Herd immunity is another word for mass murder. If you allow this virus to spread …we are looking at 2 to 6 million Americans dead. Not just this year, but every year.”