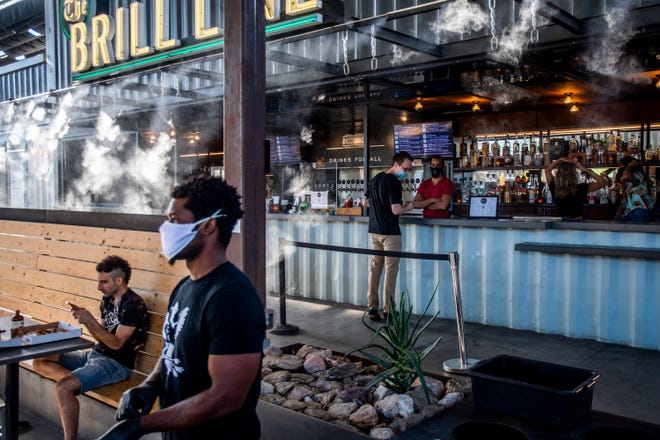 The report, published this week by the federal Centers for Disease Control and Prevention, was authored by officials with the Arizona Department of Health Services, including director Dr. Cara Christ.

A stay-at-home order in Arizona expired May 15 and two weeks later — between June 1 and June 15 — the daily average number of COVID-19 cases jumped by 151%, the report says. The incubation period for a person exposed to the SARS-CoV-2 virus to develop COVID-19 is approximately two days to two weeks.

The spike in cases ended up overwhelming the state’s health care system with a surge of extremely ill COVID-19 patients needing care.

On June 6, as COVID-19 hospitalizations in Arizona climbed, Christ sent a letter to hospitals in the state urging them to “fully activate” their emergency plans.

The number of COVID-19 cases in Arizona peaked between June 29 and July 2, stabilized between July 3 and July 12, and declined by approximately 75% between July 13 and August 7, the report says.

“Mitigation measures, including mask mandates, that are implemented and enforced statewide appear to have been effective in decreasing the spread of COVID-19 in Arizona,” the report says.

What the report doesn’t make clear is that local jurisdictions were prevented by Arizona Gov. Doug Ducey from imposing mask requirements until June 17, when the new coronavirus that causes COVID-19 was already aggressively spreading throughout the state. Arizona does not have a statewide mask mandate.

“If they’d been allowed to do so earlier, a number of those jurisdictions, if not all of them, would have had those mandates in place earlier and our peak of infection would have been lower,” said Dr. Bob England, who until June spent a year as interim director of the Pima County Health Department and is a former Maricopa County health director.

“But that’s all hindsight. What matters now as we head into the winter months and we all anticipate another surge of this infection coming, the locals need to have the continued ability to impose mitigating measures like masks.”

Will Humble, Arizona Public Health Association executive director, wrote in a blog post Thursday that the state’s report was  “wordsmithed” to leave out important information about the mask issue.

Humble wrote that “courageous elected officials in county and local government across the state” had requested authority from Ducey to issue mask requirements and that many of them later “faced backlash from elements of their electorate” once those requirements were in place.

Under pressure from the medical community and some local leaders, Ducey said June 17 that jurisdictions like cities, towns and counties within the state would be able to pass their own mask mandates to prevent the spread of COVID-19. Both Ducey and Christ wore face masks to the June 17 media briefing, something they had rarely been seen doing before that day.

After Ducey gave them the authority to do so, most areas of the state quickly imposed mask mandates.

Ducey stopped short of allowing local entities to take other mitigation measures related to the virus. And though some medical experts asked for a statewide mask mandate, he did not impose one.

The number of COVID-19 cases in Arizona stabilized two weeks after that June 17 order, though hospitalizations continued to climb.

On June 29, Christ declared that hospitals could activate “crisis care standards” that guide the allocation of scarce resources to patients based on factors such as their likelihood for survival.

Closure of bars, gyms and theaters may have helped

Ducey’s June 29 “Pausing of Arizona’s Reopening” executive order also capped swimming pool crowds at 10 and public gatherings at 50. The executive order paused the reopening at least through July 27 and allowed individual businesses and organizations to submit applications to reopen, as long as they meet certain requirements.

A combination of voluntary and enforceable measures to stop the spread of the virus is more effective than any single measure, the report says.

The report says mitigation measures such as masks, business closures and the state’s promotion of social distancing and good hand hygiene may not be the only factors that influenced declining COVID-19 case counts in Arizona.

Travel restrictions, measures in neighboring states, and individual choices cannot be ruled out as influencing case counts, the authors write, emphasizing that they did not assess how well Arizonans adhered to COVID-19 mandates and guidance.

Arizona’s COVID-19 metrics continued to stabilize and decline throughout September. There’s been a recent uptick in hospitalizations, but it’s too early to say whether the increase is a trend.

The White House Coronavirus Task Force as of Sept. 27 listed Arizona in a “green” zone for its rate of positive tests, records show — 4.9% or below, and in the mid-level “yellow” zone for COVID-19 cases, indicating between 10 cases and 50 new cases per 100,000 population over the previous week, among the lower rates in the country.

Other highlights of the most recently available data from the White House task force: