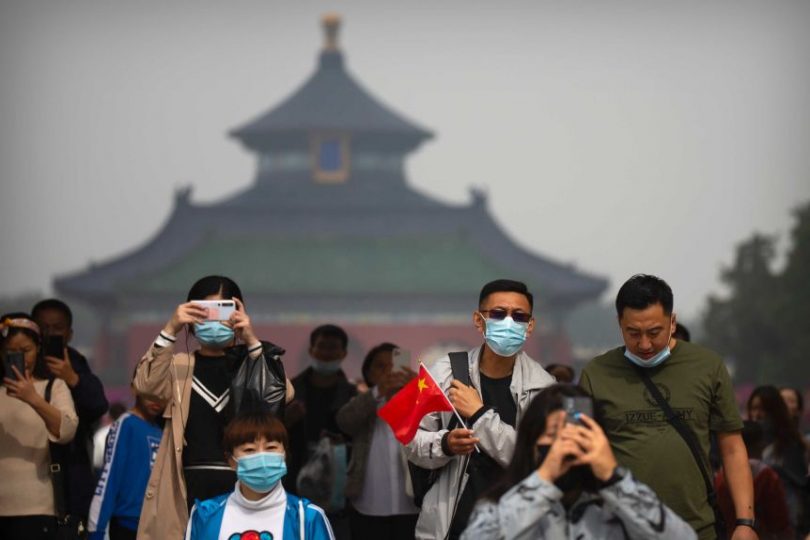 Just six months ago, Yi Yu’s hometown was emerging from the world’s first — and one of its strictest — lockdowns.

But during China’s Golden Week earlier this month, the streets of Wuhan, once ground zero COVID-19, were bustling with tourists.

“When I go outside, I can see lots of people on the street now,” Ms Yu said.

“I saw a lot of people lining up in front of a small street-food bar the other day. I can tell most of them are tourists.”

The city welcomed more than 18 million tourists during Golden Week from October 1 to 8, according to official data from the Wuhan Tourism Bureau.

Golden Week is a week-long holiday to celebrate the country’s National Day, and it typically generates a surge in tourism — almost all of it domestic in 2020 due to international border closures.

Some 637 million Chinese tourists travelled for Golden Week this year, injecting 466.6 billion Chinese yuan (about $96.4 billion) into the economy, according to the Chinese Ministry of Culture and Tourism.

Among the travellers was Ms Yu’s grandfather, who is in his 80s and was sick with COVID-19 symptoms at the height of the pandemic in Wuhan in February.

While he chose to stay close to home, only going on a road trip with Ms Yu’s sister to Wuhan’s outskirts, others travelled much further afield.

Among them was Shengwei Ye, who last month told the ABC he would have liked to spend Golden Week in Australia if it were not for the pandemic.

But instead, he journeyed from his home in Shenzhen in the south-east to Xinjiang, an autonomous region in the far north-west.

Mr Ye, who frequently travels for business, said he was struck by how crowded the airport was.

“I think there were probably even more people than the Chinese New Year holiday,” he said, comparing it to what is usually the busiest time for travelling.

The Ministry of Culture and Tourism said traveller numbers for Golden Week were at 80 per cent compared to last year, while tourism spending was at 70 per cent of pre-pandemic levels.

Mass travel with no major outbreaks — yet

Despite the mass movement of hundreds of millions of people, the tourism boom has not yet resulted in a large outbreak in COVID-19 cases one week on.

China has officially recorded 90,800 cases and more than 4,700 deaths, according to the Johns Hopkins University tally.

The country currently has 622 active cases, most of them acquired overseas.

That includes 381 asymptomatic cases, which China records separately from its official tally.

But Qingdao, the largest city of Shandong province in China’s east, is bucking the trend.

As of Wednesday, two more infections more had been recorded in the city.

In response, authorities have launched a city-wide testing blitz, aiming to test some 9 million residents in the next five days.

Before this, the last locally acquired case in China was recorded in mid-August.

The apps synchronise a citizen’s ID and their travel history. Their device pings nearby mobile phone towers to track their location and reveal whether they have been to areas deemed to be a high or medium risk during the past 14 days.

For example, if a person has been in Qingdao in the past few days, their QR code would be red or yellow, rather than green.

Prior to the Qingdao outbreak, there were no high- or medium-risk areas in China for two months. As Mr Ye pointed out, travellers would not have been hindered by a poor personal health code in Golden Week.

“But, in Urumqi, the capital of Xinjiang, the protocols are much stricter than [in other] cities,” he said.

The region has long been described as a surveillance state for its Uyghur population, where more than a million people from the Muslim Turkic-speaking ethnic group are detained in re-education centres.

In terms of COVID-19 measures, Mr Ye said Xinjiang had a more advanced temperature check system, which looked like a gate and was contactless.

“[They] can be seen everywhere and people are required to wear a mask all the time,” he said.

“Police will patrol the street to remind people to wear their masks properly.”

In Wuhan, masks are now only mandatory on public transportation, but Ms Yu says most people continue to wear them.

“Chinese people are obedient and people were scared by what happened earlier this year,” she said.

“After such a tragic situation, which I think is a big loss and a lesson, everyone will be much more cautious. Even if it’s much safer now.

“Your little action can avoid causing troubles to the big groups, so why not?”

Keeping the virus — and citizens — under control

Hui Yang, an associate professor and health specialist from Monash University, said China had done a good job of managing the large scale of internal mobility during the holiday.

“China’s approach is a stringent and active one. The movement of hundreds of millions of people was within the country and there were protective measures in place,” he said.

He said authorities “closely monitored” some key populations — such as close contacts of confirmed cases — and had categorised areas by risk level through contact-tracing tools.

Former Chinese diplomat Han Yang, who now lives in Sydney, said China had enjoyed relative success in controlling the pandemic compared to many Western countries, in large part due to its political system.

“China is a centralised country with an autocratic system,” he said.

“If the Government prioritises something, the whole country will mobilise together under its orders.

“This mobilisation does not exist in Western countries. Especially in a federal country like the United States.”

Mr Yang said a centralised Government such as China would use all kinds of technologies to strengthen its control on individual rights.

“In a society like China and North Korea, the Government can close shopping malls, schools and all enterprises with one order, which is the most effective way to control the epidemic,” he said.

“As for the saying that Chinese people are more obedient, the fact is actually under such a system, there is no other choice but to obey.”

Mr Ye said he was not worried about China’s post-pandemic “new normal”.

“I believe Chinese medical care is now quite good and they have a lot of experience coping with the virus,” he said.

Now he is waiting for international borders to reopen so he can head abroad for his next holiday.

But Ms Yu said there were other pressing issues China needed to address.

“During the pandemic’s peak in Wuhan, I felt I had some psychological problems,” she said.

“Seeing so much negative news every day, I felt under great pressure.

“And I know some people certainly suffered bigger pressures than me because I know someone who got hospitalised because of the virus, someone lost their friends and family … so mental health will be a major issue.”

She said a friend who got COVID-19 and recovered was later rejected for several jobs because of the stigma around the disease.

“Such discrimination in the workplace has to be addressed in the post-pandemic era too,” Ms Yu said.

Dr Yang said it would be far more difficult to restart the social economy under the new normal than to resolve the health problems caused by the virus.

“The task facing many countries nowadays is to acknowledge it is harder to reopen than lock down,” he said.

“How to clean the battlefield, clean up the mess, activate and restore the national economy and people’s life again is a big problem.”