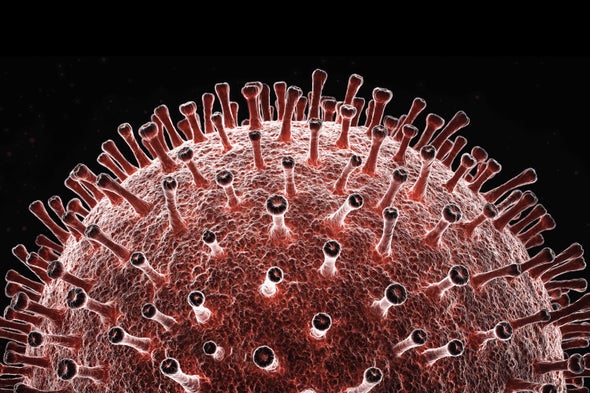 The pandemic virus SARS-CoV-2 is thought to have originated in bats, like many viruses. To make the leap and infect another species, zoonotic viruses might acquire genetic mutations that enable or encourage this to happen. Researchers have now found some of the mutations in the SARS-CoV-2 genome that may have helped it thrive in a human host. The work, which was reported in PeerJ, has suggested that these mutations had a significant impact on how the virus folds its RNA inside of host cells.

“We’re trying to figure out what made this virus so unique,” said lead study author Alejandro Berrio, a postdoctoral associate in biologist Greg Wray’s lab at Duke University.

Previous research has revealed evidence that changes in a gene that encodes the spike protein of SARS-CoV-2 were being selected for in the evolution of the virus. Spike proteins enable viruses to enter host cells and cause infection.

In this work, the scientists developed statistical tools to look for adaptive changes in the SARS-CoV-2 strains that infect humans, which are not found in coronaviruses carried by bats and pangolins. The study authors found mutations that impacted the spike proteins; viral strains with these versions of the spike protein were more likely to be good at infecting human cells. But they also found other, silent mutations.

Silent mutations change a genetic sequence but do not change the resulting amino acid in the encoded protein’s sequence. In two of the viral proteins, called Nsp4 and Nsp16, there were mutations that seem to be giving the virus an advantage over previous strains, but don’t alter the proteins’ amino acids. Berrio suggested that these mutations are changing how the virus’s RNA genome is folded, and how it behaves, inside human cells.

The outcome of these structural changes is still unknown, Berrio acknowledged. But they may be helping the virus spread in people that are asymptomatic, part of why this pandemic has been so difficult to control.

This work could help create treatments or preventive approaches, said Berrio. “Nsp4 and Nsp16 are among the first RNA molecules that are produced when the virus infects a new person,” Berrio said. “The spike protein doesn’t get expressed until later. So they could make a better therapeutic target because they appear earlier in the viral life cycle.”

The study may also help us learn more about the genetic changes that convert a virus from a minor problem to a global threat.

“Viruses are constantly mutating and evolving,” Berrio said. “So it’s possible that a new strain of coronavirus capable of infecting other animals may come along that also has the potential to spread to people like SARS-CoV-2 did. We’ll need to be able to recognize it and make efforts to contain it early.”