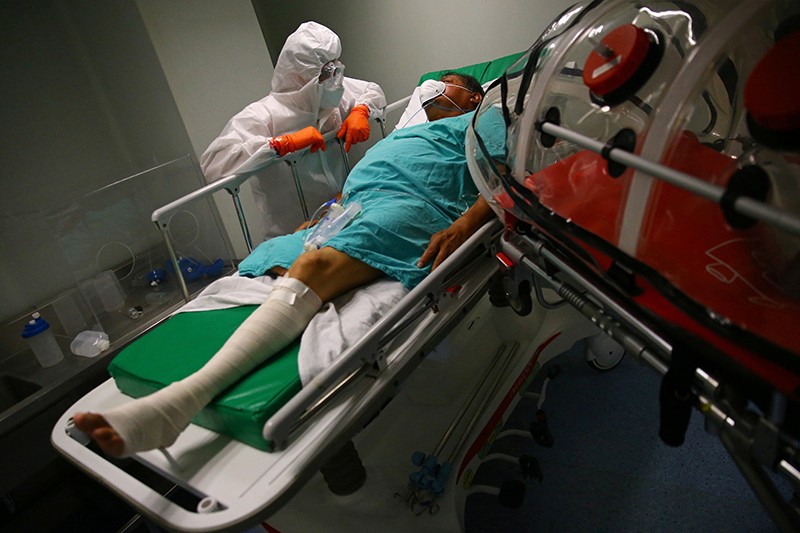 Researchers fear that vaccines might not be as effective in people who are obese, a population already highly vulnerable to COVID-19.

When Jesús Ojino Sosa-García looks out over the people being treated for COVID-19 in his hospital’s intensive-care unit, one feature stands out: “Obesity is the most important factor we see,” he says.

Sosa-García works at Hospital Médica Sur in Mexico City, which has been battling a COVID-19 outbreak for six months. “Every day, we receive patients,” he says. And many of those showing up with severe cases come from Mexico’s growing population of obese individuals — currently 36% of adults. Sosa-García and his colleagues checked the stats early in the pandemic and they were already indicating an imbalance: half of the 32 people admitted to his hospital’s intensive-care unit with severe COVID-19 before 3 May were obese1.

Sosa-García is optimistic that a coronavirus vaccine will arrive soon to dampen the pandemic. But for Mexico and many other countries with a burgeoning population of people with high body mass indices (BMIs), some researchers fear that a vaccine might not be the panacea Sosa-García is hoping for. Obesity correlates with a dulled immune response to COVID-19. And vaccines for a handful of other conditions often don’t work as well in obese people, suggesting that a shot for COVID-19 might not provide as much protection as researchers would like. “We worry about that,” says Donna Ryan, who has studied obesity at the Pennington Biomedical Research Center in Baton Rouge, Louisiana.

Researchers are still unsure whether or not obesity will affect vaccine efficacy. And there might be ways to counteract problems if they arise. But scientists are also concerned that clinical trials might not be well designed to capture such issues promptly. “It‘s something the experts need to really look at,” says Ryan.

It was clear early in the outbreak that obesity heightened the risk for people infected with the coronavirus. When epidemiologist Lin Xu at Sun Yat-Sen University in Guangzhou, China, was analysing data from the earliest wave of the epidemic in China, she noticed a pattern emerging in model after model. “BMI was always there,” she says. “It is always positively associated with severity of COVID-19.”

When Xu submitted her study to an academic journal in March, the editors urged her to alert the World Health Organization about her findings. Since then, studies have poured in from countries around the world reaching the same conclusion: those who are obese are more likely to die from COVID-19 than are those of normal weight, even when factors such as diabetes and hypertension are taken into account.

There are a slew of possible reasons. People with higher BMIs are more difficult to care for. It can be challenging to put a tube down their airway when hooking them up to a ventilator, for example. They can also have reduced lung capacity.

Then there are the more-hidden, molecular possibilities. Insulin resistance makes it difficult for the body to respond normally to sugar and can precede diabetes. It is more common in those with high BMIs and could exacerbate the metabolic effects of coronavirus infection. And adipose tissue expresses relatively high levels of the ACE2 (angiotensin-converting enzyme 2) receptor that SARS-CoV-2 uses to gain entry into cells. “Adipose tissue seems to work like a reservoir of the virus,” says Gianluca Iacobellis, an endocrinologist at the University of Miami in Florida.

But the effects on the immune system are what concern some researchers the most. Obesity can cause chronic, low-grade inflammation, which is thought to contribute to the increased risk of conditions such as diabetes and heart disease2. As a result, people who are obese might have higher levels of a variety of immune-regulating proteins, including cytokines. The immune responses unleashed by cytokines can damage healthy tissue in some cases of severe COVID-19, says Milena Sokolowska, who studies immunology and respiratory diseases at the University of Zurich in Switzerland. And the constant state of immune stimulation can, paradoxically, weaken some immune responses, including those launched by T cells, which can directly kill infected cells. “I would say they are more exhausted at the start in their fight with infection,” says Sokolowska.

Preliminary evidence suggests that SARS-CoV-2 infections linger for about five days longer in people who are obese than in those who are lean, says endocrinologist Daniel Drucker of the Mount Sinai Hospital in Toronto, Canada. “That would imply that these people are having trouble clearing the infection,” he says. “They may have trouble mounting normal viral defences.”

Obesity is also linked to less-diverse populations of microbes in the gut, nose and lung, with altered compositions and metabolic functions compared with those in lean individuals. Gut microbes can influence the immune responses to pathogens — and to vaccines, says Sokolowska. Last year, for example, researchers reported that the changes to the gut microbiome that come with taking antibiotics alter responses to a flu vaccine3.

All this could spell trouble for a SARS-CoV-2 vaccine, when it arrives, particularly in the growing list of countries with obesity problems. According to the latest data from the World Health Organization, about 13% of the world’s adults are obese. Ryan points to studies of vaccines against influenza, hepatitis B and rabies, which have shown reduced responses in those who are obese compared with those who are lean4. “With influenza, we’re seeing that vaccination does not work well in those who are obese,” says Xu. “We don’t have the data yet on coronavirus.”

Some are unconvinced that obesity will blunt the efficacy of vaccines. Drucker notes that the studies on influenza vaccines were relatively small. “It’s certainly a reasonable hypothesis,” he says. “But I don’t think that we can look at influenza as a clear example.”

There might be ways to compensate for vaccine shortcomings, just as researchers have been working to improve vaccine response in elderly people. Giving obese people extra doses of vaccine is one possibility, says Ryan. “Maybe three injections instead of two, maybe a larger dose — we shouldn’t just throw up our hands and say it’s not going to work.”

There are three leading candidate vaccines currently being tested in large clinical trials. This could offer a chance to evaluate how well they work, not only in the population at large, but in obese individuals in particular, says Barry Popkin,who studies nutrition at the University of North Carolina in Chapel Hill. But it’s unclear whether, or when, the studies will have sufficient power to discern a difference between obese and lean individuals, he says.

A trial being run by biotechnology firm Moderna in Cambridge, Massachusetts, aims to enrol 30,000 participants, but is planning to base its conclusions on data from the first 151 people who go on to develop a COVID-19 infection. Other large vaccine trials have set similar targets. Depending on what countries the participants hail from, the trial might not have a sample that will allow it to determine whether obesity affects the vaccine response. “It depends on who volunteers,” says Popkin.

It might also depend on how well trial sponsors recruit individuals from under-represented minority groups, which have been hard hit by the COVID-19 pandemic and also experience high rates of obesity, says vaccinologist Gregory Poland at Mayo Clinic in Rochester, Minnesota.

Poland says that he has urged pharmaceutical companies to stratify their data by BMI, but he worries that the word is not getting out. “I will not be surprised if antibody levels are lower and don’t last as long in people who are obese or overweight,” he says. “It won’t be a surprise to some of us, but it will be a shock to the rest.”

Even if antibody responses seem robust, that could be misleading, cautions Melinda Beck, who studies the relationship between nutrition and immune responses at the University of North Carolina. In her studies, she says, obese people have normal initial antibody levels in response to flu vaccines, but are still twice as likely as vaccinated lean people to get the flu (that’s not to say that vaccination offers obese people no benefit). And analyses so far have focused on Western definitions of obesity. These are based on BMI, a crude measure that fails to distinguish between fat that accumulates under the skin, and fat that accumulates around organs, called visceral fat, which is more closely associated with diseases such as diabetes and high blood pressure.

In people of European descent, a BMI of 30 kilograms per square metre or above is considered obese. But Popkin notes that people in some countries in Asia, the Middle East and Latin America, for example, tend to accumulate visceral fat at lower BMIs. China is the only country to set a lower threshold — a BMI of 28 kg m–2 — for obesity, but even then, Popkin says, some Chinese researchers will report their data using Western definitions of BMI to improve their chances of publishing.

Ultimately, the world will probably need to wait for data from clinical studies to show the way, says Drucker. But the waiting could be nerve-wracking. Sosa-García and others hope that the association between COVID-19 and obesity will force some governments and health-care systems to engage with the growing obesity problems in their countries. “If you are a public-health official and you’re looking at 40% of your population at high risk, that data is saying, ‘wake up and take notice’.”