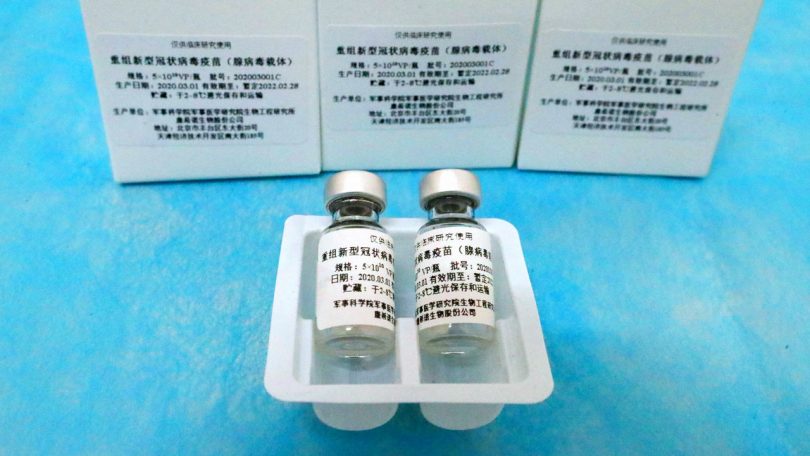 Certain COVID-19 vaccine candidates could increase susceptibility to HIV, warns a group of researchers who in 2007 learned that an experimental HIV vaccine had raised in some people the risk for infection with the AIDS virus. These concerns have percolated in the background of the race for a vaccine to stem the coronavirus pandemic, but now the researchers have gone public with a “cautionary tale,” in part because trials of those candidates may soon begin in locales that have pronounced HIV epidemics, such as South Africa.

Some approved and experimental vaccines have as a backbone a variety of adenoviruses, which can cause the common cold but are often harmless. The ill-fated HIV vaccine trial used an engineered strain known as adenovirus 5 (Ad5) to shuttle into the body the gene for the surface protein of the AIDS virus. In four candidate COVID-19 vaccines now in clinical trials in several countries, including the United States, Ad5 similarly serves as the “vector” to carry in the surface protein gene of SARS-CoV-2, the viral cause of the pandemic; two of these have advanced to large-scale, phase III efficacy studies in Russia and Pakistan.

In today’s issue of The Lancet, four veteran researchers raise a warning flag about those COVID-19 vaccine candidates by recounting their experience running a placebo-controlled AIDS vaccine trial dubbed STEP. An interim analysis of STEP found that uncircumcised men who had been naturally infected with Ad5 before receiving the vaccine became especially vulnerable to the AIDS virus. The vaccine, made by Merck, had been the leading hope for what was then a 20-year search for a shot that could thwart HIV. But after the STEP results appeared, the field went into a tailspin. “It took a decade to recover,” says one of the co-authors of the Lancet correspondence, Lawrence Corey of the Fred Hutchinson Cancer Research Center.

Corey, who now co-leads the COVID-19 prevention network in the United States that is testing vaccines at the behest of the National Institutes of Health, says he and his co-authors went public because Ad5-based COVID-19 vaccines may soon be tested in populations with high HIV prevalence and thus a greater risk of accidental infection during a clinical trial. “If I were in a sub-Saharan African country and making a decision as to what I would want for my country for a general population use of a SARS-CoV-2 vaccine, I don’t see why I would pick an Ad5 vector [vaccine] when there are many other alternative choices,” Corey says.

The backfire in STEP—which evaluated the efficacy of the Merck vaccine in people at high risk of HIV infection in the Americas and Australia—also appeared in a second study, dubbed Phambili, of the same vaccine. It was taking place simultaneously in South Africa and was stopped early because of the STEP data.

Precisely how Merck’s Ad5 vaccine increased the risk of HIV transmission in STEP and Phambili remains murky. The Lancet editorial spells out several possibilities, including dampening of HIV immunity, enhancing replication of the AIDS virus, or setting up more target cells for it.

In addition to the Ad5 COVID-19 vaccine candidates, several other leading vaccines, including ones made by Johnson & Johnson and AstraZeneca/the University of Oxford, use different adenoviruses as vectors. There’s no evidence that any of those adenoviruses increases the risks of an HIV infection.

I don’t see why I would pick an Ad5 vector [vaccine] when there are many other alternative choices.

Of the Ad5-based COVID-19 vaccine candidates, from China-based CanSino Biologics, has developed the furthest. In a Lancet report in May, researchers from the company recognized the “controversial” possibility of their vector increasing the risk of HIV infection and said they would watch for it in the candidate’s trials. CanSino’s COVID-19 vaccine is being tested in efficacy trials in Russia and Pakistan that together hope to enroll more than 40,000 people, and the company is discussing starting studies in Saudi Arabia, Brazil, Chile, and Mexico.

China has already approved a CanSino vaccine against Ebola that uses the Ad5 vector. Yu Xuefeng, CanSino’s CEO, tells Science the risk of increased HIV susceptibility may be limited to Ad5 vaccines that produce an AIDS virus protein. “There’s no clear answer yet,” Yu says. “We certainly haven’t seen anything with the Ebola vaccine.” The company’s Ebola vaccine was tested in a population in Sierra Leone that, he notes, had a relatively high HIV prevalence, making it more likely to have detected the problem if it existed.

Russia’s Gamaleya Research Institute has a COVID-19 vaccine candidate that uses a combination of Ad5 and Ad26 vectors; it’s now in an efficacy trial in that country.

Last week, ImmunityBio received approval from the U.S. Food and Drug Administration to begin human trials of its COVID-19 vaccine, which uses Ad5 as a vector. The first trial will take place in Newport Beach, California, but Patrick Soon-Shiong, the company’s CEO, says he also hopes to test it in South Africa, where he grew up and went to medical school.

He calls the STEP study results “very, very fuzzy” and stresses that ImmunityBio’s Ad5 has four deleted genes that reduce the immune responses it triggers. “It’s 90% muted,” he says.

ImmunityBio is discussing the risks with scientists and regulators in South Africa of a trial there to test its modified Ad5 COVID-19 vaccine. The informed consent process for that proposed study would tell participants about potential risks given the previous STEP and Phambili results.

Soon-Shiong emphasizes that his company’s experimental COVID-19 vaccine, unlike every other candidate that uses an adenovirus vector, presents two different SARS-CoV-2 genes and might therefore offer more protection from infection or disease. Why only test this in wealthy enclaves of Southern California, he asks? “Why not South Africa? Why not for the underserved people of the world?”

Pediatrician Glenda Gray, who heads the South African Medical Research Council and was the protocol chair of Phambili, has taken part in several discussions with the ImmunoBio team. “When [Soon-Shiong] contacted South Africa, we were obviously quite concerned,” Gray says. “All of us who were in Phambili and quite traumatized by what happened asked whether there was an appetite to do something in South Africa.”

But after several months of deliberations, the South Africans concluded that regulators should consider a small trial of the vaccine there in people at low risk of HIV infection, Gray says. “We decided not to throw the baby out with the bath water just yet,” she adds. “If it does go ahead in South Africa, there has to be huge consultation with communities, and we have to make doubly sure that the participants understand what happened in the past.”

Gray says South Africa appreciates ImmunoBio’s offer to allow the country to manufacture the product. “We’re in the middle of a COVID-19 epidemic in South Africa, and we don’t know if we’ll ever get access to the current suite of vaccines” produced elsewhere, she says.

The decision to move forward, she insists, has to be left to South African scientists, regulators, and ethics committees. “It’s incredibly patronizing for people to determine what science is good or bad for other countries,” she says. “Everyone knows about Phambili and STEP, and the scientists understand that there’s an important need to be cautious.”

Gray, who has co-authored papers about HIV vaccines with Corey and the other three authors of the Lancet correspondence, says there are no easy answers. “What if this vaccine is the most effective vaccine?” she asks. “If this works out to be an important vaccine, we’ll have some experience with it.”