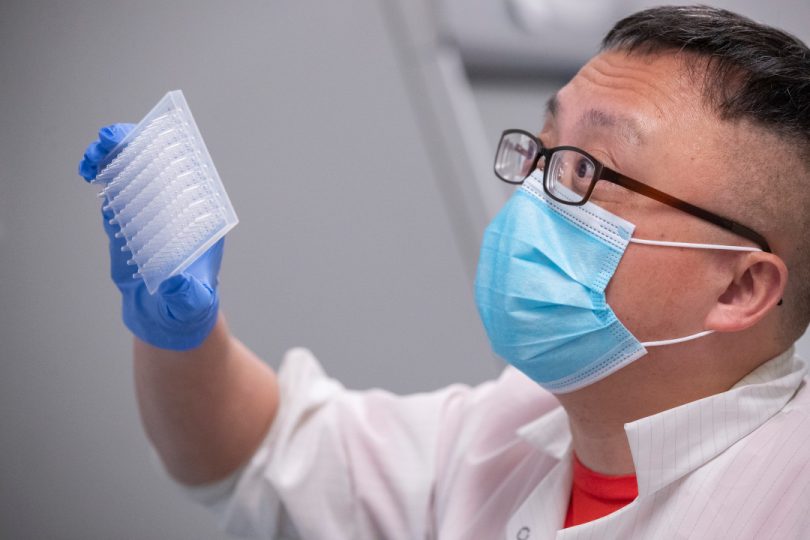 UC Riverside is doing its own testing for the novel coronavirus.

The Inland Empire campus of about 25,000 students opened a COVID-19 testing laboratory in September and is processing 400 test samples per day, said Rodolfo Torres, vice chancellor for research and economic development.

And the university plans to boost the number of daily tests to 600 in the next few weeks, Torres said.

“We want to minimize the chance that there will be an outbreak,” he said.

In a densely populated campus environment, he said, that means testing over and over again — and getting results quickly — so infected people can be promptly quarantined before spreading the virus.

Speed also is crucial, he said, because infected young people are more likely than older people to not have symptoms.

UCR’s unveiling comes as some universities across the nation have struggled to prevent campus breaks.

Meanwhile, Riverside County has logged a total of 61,824 confirmed cases of COVID-19 and 1,256 deaths since the outset of the pandemic.

In recent days, the number of new cases has been trending upward, threatening to send the county back into the state’s purple tier for restrictions and trigger closures of newly reopened businesses.

Torres noted that at various stages it has been difficult to get tested, there have been shortages of supplies and there have been delays in getting results. Those problems have underscored the need for an independent campus testing system, he said.

Just how fast results come back from UCR’s lab depends on when tests are taken.

If someone goes in for a COVID-19 test in the morning, Torres said, he or she will have results in 24 hours. If a person is tested in the evening, results will be available in 36 hours — 48 hours max, he said.

Right now, there aren’t many students going to classrooms on the fast-growing Riverside campus because of the pandemic and the restrictions that has triggered.

Torres said those students, because they live in close proximity, are being watched closely and tested twice weekly.

“We’ve gone through all those students twice already,” Torres said.

As of Tuesday, Oct. 6, four students had tested positive, he said.

As for professors and other staff, Torres said the university will test them if they are in contact with students or at high risk. Warren said that will involve about 300 faculty members — roughly a third of the total.

“We don’t have the capacity to test them all,” Torres said.

Because of that, Torres said, many faculty members will be asked to get tested off campus.

Officials began talking about establishing a lab on campus in April, according to an internal university article. Chancellor Kim A. Wilcox appointed Torres and Dr. Deborah Deas, vice chancellor for health sciences and the Mark and Pam Rubin dean of the School of Medicine, to a group that explored the idea.

Deas said the lab results from months of hard work and collaboration among many people.

Juliet Morrison, an assistant professor and virologist in the Department of Microbiology and Plant Pathology, said in the article that testing is going to be crucial “if the campus is to eventually reopen for in-person teaching.”

UCR’s testing lab is in the Multidisciplinary Research Building.

The lab is essentially two small rooms with refrigerators, robots, and polymerase chain reaction, or PCR, machines where testing is done in many separate steps, Torres said.

“Barely two people can work in there,” he said.

At first, Torres said, UCR was going to administer the nasal test. But he said officials pivoted to the saliva testing method because it’s faster and less invasive.

“We changed the way we test, and we may change it again,” Torres said. “We will continue to adapt to the best technology that is available.”

While initial results have been encouraging, officials will have a better feel for how the fall quarter is going to go in a few weeks as students settle into dormitory life, Torres said.

Torres added that the university is counting on students.

“They are required to sign an agreement that they will behave in a certain way,” he said.

Students are asked, for example, to pledge they will stay home if they get the fever, chills or severe fatigue, or lose their sense of taste and smell, among other things.

The pledge also states: “I will wear a face covering at all times, both inside and outside, when on university property. For students living in on-campus housing, this does not apply while eating or drinking, showering, and brushing teeth or when alone in my room.”

“We cannot guarantee a safe place for everyone,” Torres said. “But we can make it as safe as we can by taking precautions.”